Bioinformatics Careers: Hot and Getting Hotter 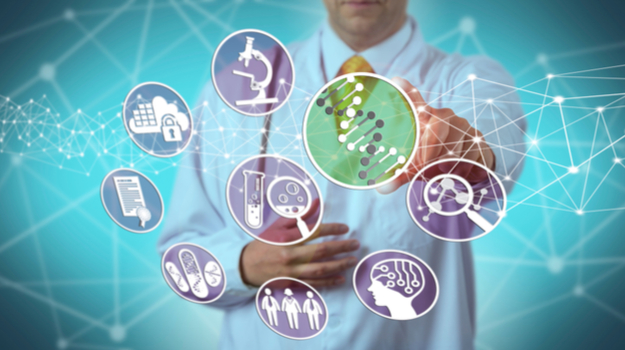 There are huge opportunities in bioinformatics careers

Chew on this thought: 90 percent of all the data in existence was generated in the last two years. And according to IBM, 2.5 million terabytes of data are created every day, with an average computer holding 1 terabyte of data.

This partly explains why data science and bioinformatics careers are considered the hot and sexy new fields to work in.

The term big data is usually used to describe—surprise!—large volumes of data, both structured and unstructured. That means data generated across an organization or enterprise such as sales figures, website clicks, etc. In biopharma, it can include that information, but increasingly means huge amounts of genetic data as well as other biological and health-related information.

Which is where bioinformatics and data science come in. There’s so much data to work with now that there is a need for people who specialize in data analyses and manipulation who have a background in the life sciences.

Probably the best definition of “bioinformatics” is processing and analyzing large-scale genomics and other biological datasets to develop biological insights. As such, other words are sometimes used as well, such as “computational genomics” and “genomic data science.”

Data science is a little broader, largely a broader term whose definition is similar to that of bioinformatics without the biological focus: processing and analyzing large-scale datasets to develop insights.

In an article in Towards Data Science by Altuna Akalin, who cites udacity, the essential skills of a data scientist include programming, machine learning, statistics, data wrangling, data visualization and communication, and data intuition, which probably means troubleshooting data analysis-related questions.

Persistence Market Research recently published a report, “Global Market Study on Bioinformatics careers – Asia to Witness Fastest Growth by 2020,” which valued the global bioinformatics market at $4.110 billion in 2014 but expected to grow at a compound annual growth rate (CAGR) of 20.4 percent from 2014 to 2020, hitting 12.542 billion in 2020.

The Future of Jobs Survey 2018 by the World Economic Forum estimates that 85 percent of surveyed companies are likely or very likely to adopt big data analytics. It also indicated that the “industrial revolution will create 133 million new job roles and that 75 million jobs will be disappearing by 2020.”

And yes, you guessed it, many of the new jobs will be in data science and bioinformatics careers. In fact, the #1 top 10 job winner was “data analysts and scientists” followed by “artificial intelligence and machine learning specialists.” The #4 spot was “big data specialists,” followed by “digital transformation specialists” (#5), “software and applications developers and analysts” (#9) and “information technology services.” (#10).

And the career outlook for bioinformatics for 2018 to 2026? The Bioinformatics Home blog writes, “The simple answer to this question is that the overall outlook is excellent, the demand outweighs the supply, but the devil is in the details as usual. Nevertheless, it is good to be a bioinformatics scientist.”

A single search in BioSpace came up with over 100 jobs specifically using “bioinformatics.” The point being: biostatisticians in the biopharma space need to have a good understanding of both data science and specific areas of the life sciences.

Akalin wrote, “If you remove the domain specific requirements from bioinformatics careers skill set, you are left with most of the data science skill set and some more. People who make the switch from bioinformatics to data science will most likely need to adapt to the data organization and distribution environment of their employer. The problems will be from a different domain, so they would need to adapt to that as well. But the same would be true, at least to some degree, for the data scientists switching jobs between different employers.”

Akalin also points out that much of the difference is related to mindset, particularly in going from academia to industry. Several data scientists who switched to bioinformatics careers or vice versa that he spoke with said that industry is more customer and product-oriented, and that the models needed in the industry require more maintenance. “In addition,” Akalin writes, discussing Markus Schuler, “he shares the idea that you don’t always go for the coolest and the best models, other factors like running time, implementation requirements, scalability and architecture fit and also interpretability of the model itself will be as important in product-oriented thinking. But in terms of skills, he adds that bioinformatics and data science is very similar if not identical.”

The Bureau of Labor Statistics doesn’t do a great job of breaking down specializations like data science and bioinformatics, tending to lump everything under Mathematicians and Statisticians. For that category, the BLS says the job outlook from 2016 to 2026 is 33 percent, much faster than average, and that the median pay in 2017 was $84,760 with a Master’s Degree. Statisticians were cited as one of the fastest-growing occupations, at 34 percent, and epidemiologists having a growth rate of 9 percent and a median pay of a Master’s Degree candidate of $69,660.

In 2018, O*NET OnLine, sponsored by the U.S. Department of Labor, projected job growth bioinformatics careers for scientists in the U.S. to be 5 to 9 percent and as high as 12 percent in California. They projected that from 2016 to 2026 there would be 3,700 new job openings and that total employment in 2016 was 39,000 staffers. According to the same survey, median wages in 2017 were $76,690 annually for bioinformatics scientists and $47,700 for technicians.

And the Bioinformatics Home blog correctly notes, “In any case, median salaries give only a vague idea of reality since the wages vary enormously between levels of employment.”

Bottom line? If you have the expertise, training and an interest in data science and the life sciences, bioinformatics careers is booming and continuing to grow with high demand and excellent salaries. Good luck!