A Perfect Storm of Superbugs 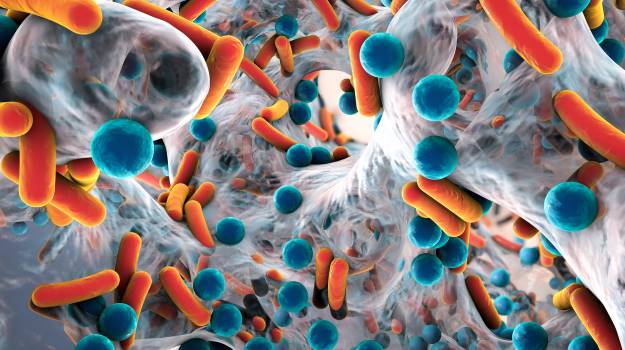 Bacteria are the perfect two-faced organisms – on one hand, these organisms form a critical microbiome that regulates human health, but on the other, they can quickly mutate to become life-threatening infections. Known as antibiotic-resistant bacteria, these sneakily powerful microorganisms have evolved to overcome the traditional antibiotic drugs available today.

To alleviate the problem of antibiotic-resistant bacteria, or superbugs, several biotechnology companies are developing different strategies to target and kill these microorganisms. These companies include Australia’s Recce Pharmaceuticals, which develops antibacterial polymers, Aridis Pharmaceuticals, which develops monoclonal antibodies, and Sigyn Therapeutics, which makes blood detoxification devices. All three companies utilize technologies that differ from the conventionally used naturally-derived antibiotics, like penicillin.

Penicillin, the first natural antibiotic, was discovered in 1928 by a chance encounter with fungal contamination in a laboratory petri dish. Many other natural antibiotics (like streptomycin) have been discovered through soil microorganism screens. However, the speed by which bacteria can evolve to tackle these antibiotics has exceeded the speed by which scientists can discover and develop new classes of the drugs.

“The bacteria have mutated, but the antibiotics have not kept up,” said Recce CEO James Graham. “Their single, or couple, mechanisms of action are simply unable to overcome that hyper-cellular mutation.”

Graham stated that following 25 cycles of polymer application to several reference bacteria, R327 maintained its antibacterial efficacy throughout all the cycles as opposed to the antibiotic amoxicillin, which stopped working from as early as two cycles of administration.

In R327’s Phase I/II burn wound trial, Graham noted a “eureka” moment where the “multi-drug resistant pathogens [were] visually reducing in the first 24 hours.” In terms of application, Graham described the polymer to be slightly viscous, spreadable across the wound, and slightly sticky. This stickiness allowed for the drug to stick to the wound, permeating the surface for antibacterial activity.

While Recce’s R327 aims to directly kill superbugs, the monoclonal antibody technology from Aridis Pharmaceuticals utilizes another strategy – that of detoxification – to harness the body’s innate immune response against these pathogens.

Aridis’ lead candidate, AR-301, is a human-derived monoclonal antibody that specifically binds to alpha toxins. Alpha toxins, which are the virulence factors secreted by superbugs such as methicillin-resistant S. aureus (MRSA), act by creating pores on immune cells or other endogenous cells – causing those cells to erupt, or lyse. According to Aridis CEO Vu Truong, Ph.D., most of the pathogenicity of these superbugs arises from these virulence factors or toxins. By removing these toxins from the body, the immune system can revive itself to eliminate the superbugs.

Truong described the antibody discovery process as first identifying patients with natural abilities to fight off these superbugs, then taking a sample of their blood. By screening the blood for antibodies that have a potent binding capability to bacterial virulence factors, the genetic sequences behind the most powerful antibodies can be cloned into a production cell line to manufacture large quantities of the antibody. One advantage of this approach, Truong explained, is that the antibodies are human-derived.

“They [have] predictable safety profiles over new antibiotics that we make,” Truong said. “New antibiotics, your bodies don’t make anything like that.”

AR-301 was noted to be safe and well-tolerated in initial Phase I/II studies of patients with severe S. aureus pneumonia. Currently, the antibody is being studied in Phase III trials.

Truong stated that in the initial trials, a reduction of ventilation time was seen in patients treated with AR-301 as opposed to those with no treatment. In addition, bacterial eradication was faster in the treated group. Although these trends were not statistically significant, Truong hopes to see similar positive results in their larger Phase III trial.

Similar to how Aridis’ monoclonal antibody treatment utilizes the premise of detoxification as a means to eliminate superbugs, Sigyn Therapeutics leverages detoxification to “clean up” bacterial toxins from the bloodstream.

Sigyn CEO Jim Joyce described its product, Sigyn Therapy, as a cartridge that acts as a blood purifier. The cartridge, which contains absorbent materials that attract bacterial toxins and inflammatory cytokines, uses pressure differentials to pull toxins into an extraluminal space.

“It’s a very low shear-force environment [that] optimizes our ability to remove these toxins and keep them in the extra-lumen space,” Joyce explained. “The things [which] move across the fiber walls that we don’t bind, they continue to travel along the extra-lumen space, and there’s a reverse pressure differential that pulls them back into the circulatory system and reconvenes them with blood cells.”

According to Joyce, the cartridge has been evaluated in pre-clinical in vitro studies to access its ability to remove several bacterial toxins, like peptidoglycan and lipoteichoic acid, from human blood plasma. Currently, the cartridge is undergoing initial safety and tolerability evaluations in pigs, before potentially moving to studies in humans.

Joyce envisions this device as a stand-alone purifier but also can see a potential benefit to combining Sigyn Therapy with other antibacterial drugs – similar to the ones developed by Aridis and Recce. “The nice thing about blood purification is that we are not introducing anything into the body,” Joyce said. “If we can increase the benefit in combination with an antibiotic or another drug agent to improve survival, that’s a real win-win situation.”