A ‘Pan-Viral’ Vaccine Designed to Protect the Elderly from Known, and Unknown, Viruses 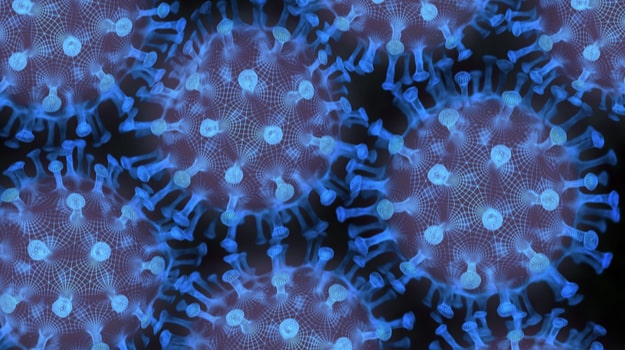 The immune response against the AlloPrime® vaccine can influence the response to a virus (like the coronavirus that causes COVID-19).

What if you could get one vaccine that protects you against a wide spectrum of viruses, even viruses we haven’t discovered yet? That might sound impossible and futuristic, but this is just what Immunovative Therapies and its sister company Mirror Biologics, Inc. are aiming to achieve. Their new ‘pan-viral’ vaccine called “AlloPrime®” is slated to begin a Phase I/II trial next month.

“Our pan-viral vaccine harnesses the same protection mechanism that naturally protects us from viral diseases – a healthy immune system,” Michael Har-Noy, MD, Ph.D., Founder and CEO of Immunovative Therapies, told BioSpace. “By remodeling the elderly immune system with a vaccine, we can arm the system to rapidly respond to a viral encounter in the same manner that a young immune system responds to a novel viral encounter.”

I’m sure the timeliness of strengthening the elderly immune system isn’t lost on you – COVID-19 heavily impacts older adults. In fact, 80 percent of COVID-19 deaths in the United States have been in people 65 years and older.

“As the majority of younger individuals exposed to the virus that causes COVID-19 are either asymptomatic or have mild symptoms, protecting the vulnerable elderly population would enable opening of the economy and building of herd immunity without an increase in hospitalizations and deaths,” commented Dr. Har-Noy.

Older adults usually have a weaker response to vaccines, so even if an effective COVID-19 vaccine is created, it could be less protective in older adults, the population that needs protection the most. That’s what is unique about this pan-viral vaccine – it focuses specifically on modulating the elderly immune system. AlloPrime® could be given as an immune modulator to the elderly on its own or it could be administered as an adjuvant with other vaccines to boost their effectiveness.

“In respiratory viral infections that can be transmitted person-to-person, it is especially important to protect the vulnerable elderly population,” Dr. Har-Noy said. “There is no guarantee that current vaccine technologies, which focus on eliciting neutralizing antibodies, will work to develop a COVID-19 vaccine – that is why having a plan B that focuses on a cellular anti-viral immune response is so important, specifically one that targets the most vulnerable.”

Before we get into the nitty gritty details, let’s go over the basics of the immune system. Your immune system is the collection of specialized cells and molecules that fight invading pathogens, like viruses and bacteria.

There are two main branches: innate immunity is the quick, non-specific first line of defense, and adaptive immunity is the slower, pathogen-specific response. There are also two types of adaptive immunity: responses that involve cells that destroy pathogens or infected cells (cell-mediated immunity), and responses that involve making antibodies to ‘tag’ the pathogen for destruction (humoral immunity).

If the pathogen hides inside cells, like viruses do, then creating antibodies against the virus may not provide the most comprehensive protection as they tend to recognize things outside the cell. Generating a cell-based immune response against a virus could provide more robust, longer-lasting protection.

Knowing the optimal immune response to a virus is especially important now. Understanding how COVID-19 affects cell-mediated and antibody-based immunity will be crucial to determining immunity and developing an effective COVID-19 vaccine.

How is this pan-viral vaccine different than other vaccines?

Current vaccine development usually focuses on stimulating the production of antibodies against the virus of interest. This relies not only on knowing what virus you are targeting, but also on having a deep understanding of the virus’ molecular structure. Most vaccines directly use viral information (such as viral genetic material, viral pieces, or even whole, weakened virus) to attempt to train the person’s immune system to recognize and destroy the virus.

Although this method has generated the multitude of efficient vaccines currently available, it has come up short for creating vaccines against certain viruses, such as HIV, Zika, and other pandemic coronavirus strains (such as those that caused SARS and MERS).

Even if a vaccine can successfully generate antibodies against a virus, the vaccine may be rendered less effective or useless if the virus mutates; the antibodies wouldn’t recognize the viral mutant as well (if at all). This happens with the various strains and mutations of the flu virus, which is why you need to get an annual flu shot to stay protected. 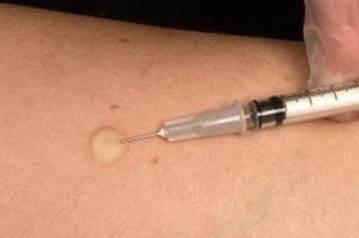 Immunovative’s vaccine, however, isn’t reliant on the virus – it focuses on the cell-mediated immune response rather than virus-specific antibodies. The vaccine supplements a person’s immune system by providing living bioengineered foreign immune cells, called AlloStim®, that aren’t virus-specific. Instead, these foreign cells elicit a powerful immune response that creates a swarm of immune cells ready to sound the alarm and fight future viral invaders.

“Rather than trying to figure out which viral peptides are immunogenic or could display on MHC molecules, our approach focuses on the natural immune response, which starts with the cellular innate immune response,” Dr. Har-Noy said. “Our vaccine would provide pan-viral protection to the most vulnerable population without needing to know the viral structure, including protection against COVID-19 viral mutants and the next viral pandemic that might emerge.”

What are AlloStim® cells and how are they made?

Immunovative’s pan-viral AlloPrime® vaccine consists of specialized, engineered living immune cells called AlloStim®. To create AlloStim® cells, blood from healthy donors is collected and a subset of the white blood cells, called CD4+ T-cells, are isolated from the blood. In the laboratory, the donor T-cells are converted into a patented immune cell that is activated with antibody-coated microbeads to create AlloStim® cells. 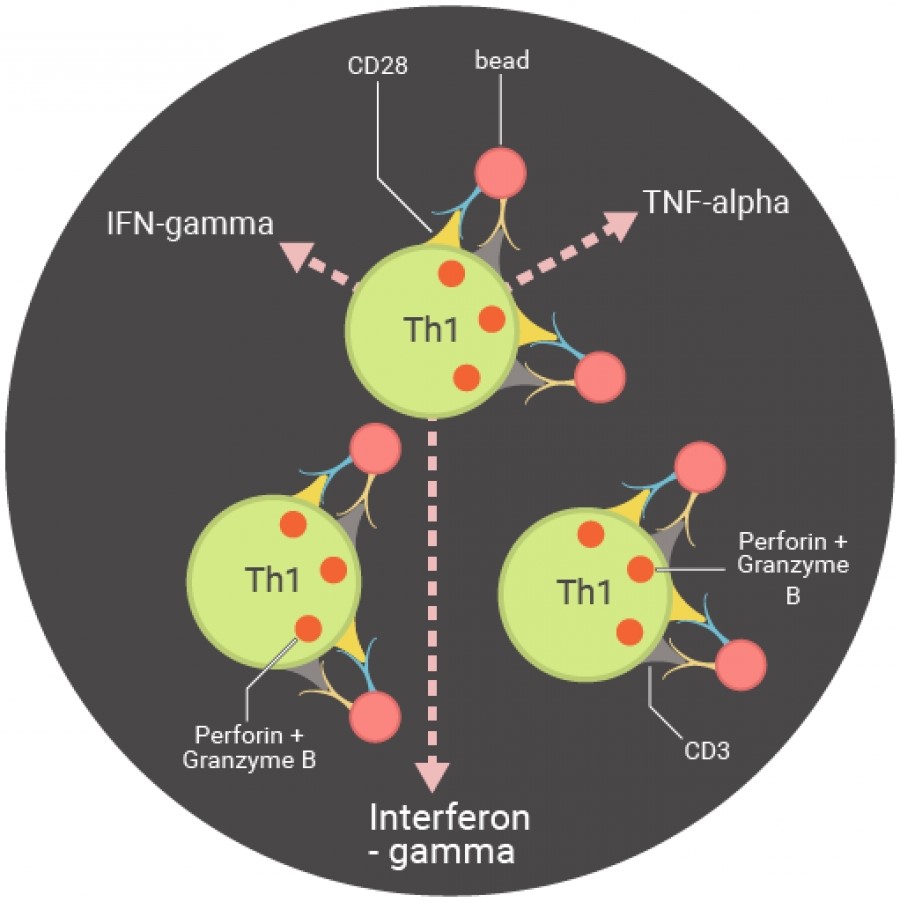 AlloStim® cells possess properties from multiple types of immune cells. They have cytolytic T-cell/natural killer (NK) cell-like properties because they contain sacs (called granules) of certain digestive enzymes (perforin and granzyme B) that can destroy virally-infected cells. AlloStim® cells also have the ability to promote anti-viral effects by steering the immune response to elicit Th1 helper T-cells by producing critical signaling molecules, such as CD40L, interferon-gamma (IFN-gamma), and TNF-alpha. These molecules activate macrophages, which educate the immune system to develop memory immune cells that can elicit a response upon encountering any virus.

AlloStim® cells are also currently being tested in separate studies as a cancer vaccine for various chemotherapy-refractory metastatic cancers.

“We’ve seen that AlloStim® cells provided protective effects in cancer patients with viral infections, such as lower viral counts in cancer patients with hepatitis B and lowered viral burden in HIV patients,” Dr. Har-Noy said. “We also have animal data demonstrating that this approach could protect mice from lethal challenge with cancer cells and malaria. These observations, in light of the current pandemic, made us think about using this technology as a preventative vaccine against viral infections.”

How can AlloStim® cells be used as a pan-viral vaccine?

The rationale for creating this AlloStim® cell-based vaccine was recently published in the Journal of Translational Medicine. Dr. Har-Noy suggests that giving older adults AlloStim® cells can repopulate their exhausted immune cells, creating an army of new, refreshed memory immune cells that are ready and waiting for an invader.

Because AlloStim® cells are intentionally mismatched to the person, their immune system will be alerted and create an immune response against the cells. After injecting the ‘angry’ living AlloStim® cells under the skin, the cells produce high levels of inflammatory molecules (such as IFN-gamma and TNF-alpha) and express CD40L on their surface. These inflammatory molecules, in addition to ‘danger’ signals released by the person’s own cells, cause an immune response known to be effective against most viral infections.

“The elderly have missing or senescent interferon-producing cells, and many modern viruses, such as the virus that causes COVID-19, actively suppresses interferon production as an immune evasion strategy,” Dr. Har-Noy said. “The goal of this pan-viral vaccine is to provide this missing part of the elderly immune system to overcome the viral evasion mechanism and provide an immediate source of interferon.”

Having a stronger, quicker anti-viral immune response the next time they encounter an invading virus provides heterologous immunity, tamping down the early viral infection before it can get out of hand.

“Allopriming with AlloStim® cells is a more refined and modern method to elicit heterologous immunity,” explained Dr. Har-Noy. “Heterologous immunity can broaden the protective outcomes of vaccinations, so it could potentially be used to enhance a future COVID-19 vaccine to be more effective in the elderly.”

The AlloPrime® vaccine wouldn’t just be for healthy people either. At the onset of a viral illness, such as COVID-19, a person who previously got this vaccine could get another dose of AlloStim® cells. This would prompt a stronger and faster anti-viral immune response that could help the body fight off the virus quicker.

AlloStim® cells have already been shown to prompt an immune response in heavily immunocompromised cancer patients, whose immune systems are not too far off from the weakened older immune system. Although it is not known how long the AlloStim®-induced immunity lasts, Dr. Har-Noy said it lasted for years in many of the cancer patients they assessed.

“AlloStim® cells have the benefits of having lots of human safety data and these cells are already being manufactured under good manufacturing processes (GMP), so we are able to quickly pivot into COVID-19 clinical trials,” commented Dr. Har-Noy. “In addition, since the AlloStim® cells are ‘off-the-shelf,’ where one donor can produce enough doses for potentially thousands of patients, the vaccine has the benefit of economy of scale to make it more affordable.”

The FDA recently cleared Immunovative and Mirror Biologics to begin a Phase I/II trial of their pan-viral AlloPrime® vaccine in healthy older adults. For the study, the company aims to recruit a total of 40 healthy adults divided between two age cohorts: ages 65-74 and ages 75+.

Participants will receive five doses of the vaccine intradermally (under the skin) within a 14-day period, each dose being a few days apart. They will be monitored for adverse events for 30 days after receiving their initial dose. Blood samples will be taken before, 30 days after, 6 months after, and 1 year after initial dosing to monitor immune response durability.

The blood samples will be used to monitor participants’ immune response to the vaccine, including if they make memory T-cells against the AlloStim® cells, if those memory T-cells can be activated after exposure to virus components, and if the activated memory T-cells can trigger an anti-viral state (if they produce IFN-gamma) and suppress viral growth in virally-infected human respiratory tract cells. The vaccine-induced cytotoxic T-cells’ ability to kill virally-infected cells will also be assessed.

“This is a good way to show efficacy because it produces a definitive response,” Dr. Har-Noy said. “The production of neutralizing antibodies against the virus of interest doesn’t necessarily determine a vaccine’s efficacy. Especially for new viral infections like COVID-19, we don’t know if the antibodies recovered from patients are protective or, if they are protective, for how long they provide protection.”

The Phase I/II study is expected to begin next month.