What You Need to Know Before Taking a Biotech Startup Job 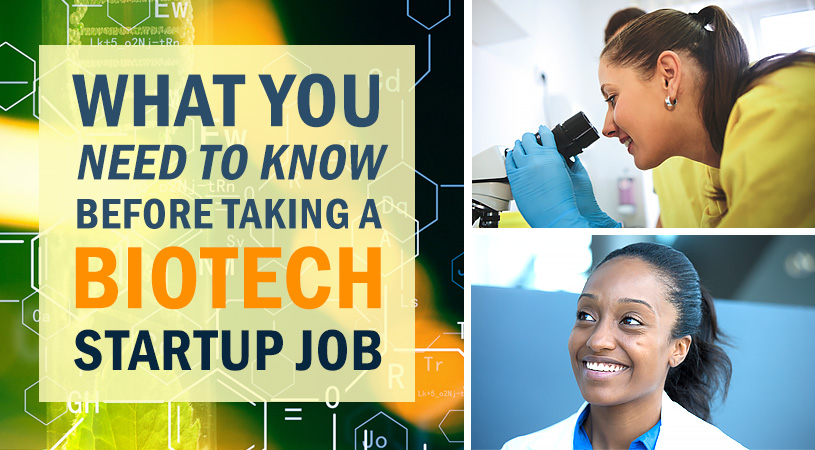 So you want to work for a biotech startup. Why not? It seems like a glamour job, working on the very bleeding edge of science. And admit it—in the back of your mind, you’re thinking it’ll become the next Genentech and you’ll be rich with all your stock options.

Although both of those things could happen, it’s important to understand just how risky working for a startup—in any field, but biotech in particular—actually is. Is that risk for you? Is the fast-paced, burn-the-midnight-oil, lack-of-security right for you?

Who’s heading the company and who makes up the senior management team? Are they experienced with startups? What’s their track record? Do investors trust him or her?

Timmerman writes, “If you’re the person who thinks you’re being hired to do a specific thing, and you don’t really work that closely with the boss at a startup, think again. Many companies, particularly those with 30 employees or fewer, are small enough that the boss is closely involved and aware of detailed, day-to-day matters.”

2. Who are your coworkers?

Most startups are small and the industry is small in many ways as well. You can be assured that with so many biotech clusters in the Boston and San Francisco areas, that most people know each other or know somebody who knows somebody. And in a small biotech startup, you’ll be spending a lot of time with those people, sometimes even during nights and weekends.

Gilman told Timmerman, “The thing that’s going to make a company succeed or fail is a combinatorial thing. Every relationship is really significant.” He notes that in academia, a jerk doesn’t stick around a long time. “If there’s an asshole in the midst you can usually outlast them. That’s not necessarily true in a company.”

3. Where’s the company and what are its odds of success?

The “where” here doesn’t refer to geographic location, but to how far along the company is in development. Not only should you consider the science, but the finances of the company. Timmerman writes, “How much money has the company raised since its founding? How much cash does it have in the bank? How long is the company’s operating runway at its existing cash spending rate, if it were never to raise another dime? Who invested—top-tier investors with good track records, or friends and family?”

And within this context, it’s probably a good idea to ask yourself—in a very cold, calculating way—what your real tolerance for risk is.

Ellen Clark, president of Clark Executive Search, which places MDs and PhDs in life science companies, recently told BioSpace, “Biotechs are still a risky game. They have one or two things, then the trial fails and boom, they fire everybody, although upper management manages to make it.”

4. Consider your role, present and future.

If a biotech startup succeeds, it’s likely to change. It will bring on more people, often growing very quickly. It will expand into clinical studies, and if it doesn’t get acquired by a larger company—a very common occurrence in a biotech that shows promise in the clinic—it will take on a commercial aspect. What will happen to you if that occurs? Will you grow with the company, or will your area of expertise make you obsolete? Will you have the opportunity to expand your skills and role?

Timmerman writes, “As Le says, people should ask themselves whether they feel like they’re considering a narrow position that might grow dull over time, or whether it’s the start of something longer and more interesting. He encourages people to ask themselves, ‘Is this something I can see myself doing down the road and being happy with?’”

Biotech companies often provide stock options as incentives. This sounds great. After all, Gilead stock has grown more than 4,930 percent in the last 15 years. But most biotech startups, even successful ones, don’t become Gilead (or Genentech.)

And stock options can be a very tricky thing. Timmerman notes that, “What fewer people realize is that startups can be successful, and still not provide stock rewards to the people who slaved away all those nights and weekends to make it a success.”

There’s a significant difference between preferred shares, which the venture capitalists typically get, and common shares, which are held by employees and founders. It’s complicated and tricky, an entirely different world from the science end of things. Timmerman writes, “For example, it might sound shocking, but More says it’s conceivable for a biotech startup to have agreements in place to assure that the entire first $100 million of proceeds from an acquisition—a successful outcome by most measures—would go to the venture capitalists. If those are the terms by which a company raised money, then common shareholders would only be able to get their proportional rewards based on what’s left after the first $100 million is paid out.”

And in some cases, not even then. Read the fine print and understand what’s being offered and when.

Knowing how much you should get paid is always a tough nut to crack. A lot of the surveys that are useful for that are confidential. Nonetheless, it’s possible the university career counseling office may have some of that information.

Timmerman says, “This is where it’s important to use your network, and to know someone who works as a corporate attorney, an HR consultant, or a venture capitalist who has access to these kinds of proprietary compensation surveys. Oftentimes, these people are happy to help prospective candidates understand if they are being offered a fair deal.”

Recruiters who specialize in the life sciences are also likely to have a good understanding of this area.

Assuming the biotech startup isn’t starting with you from the ground up, what’s the company’s culture? Every company has a personality, big or small, but those differences can be really exacerbated when there’s only a dozen people working there.

Do they have a sense of humor? Are they casual or buttoned up? Timmerman writes, “Folks coming from Big Pharma may have more adjusting to do than others. At a startup, people wear multiple hats. A lot of things need to be done that don’t fall in anyone’s specific job description. You have to be able to tolerate uncertainty about whether your company will be in business in 12 months. People often need to sublimate their own ego for the team objective, if the team is going to have any chance to win. Put another way, you have to be resourceful, and do the little things.”

That might mean washing glassware, developing and performing assays, fixing the copy machine and creating a budget for the next three months. If that’s not the type of environment you’re interested in, then a biotech startup might not be for you.