The Future of Bioprinting is Here: Poietis and Prometheus Team Up To Develop 3D Printing for Bones 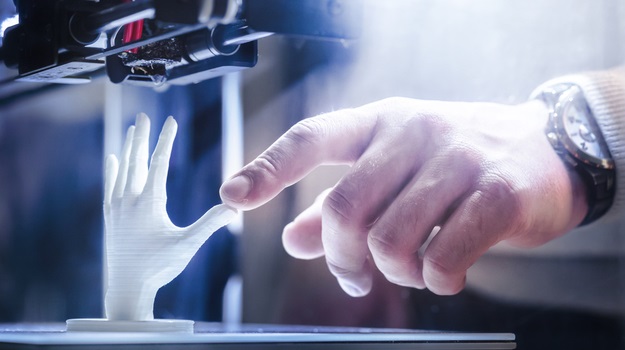 3D printing, sometimes called “additive manufacturing” is a way of making three-dimensional solid objects from a digital file. The limitations of what can be printed are seemingly only limited by the complexity of the design.

On June 19, Poietis, a Pessac, France-based company, along with Prometheus, a division of Skeletal Tissue Engineering at Leuven, Belgium, announced they had entered into a two-year Collaborative Research Agreement to develop high-precision 3D Bioprinting of tissue engineered Advanced Therapeutic Medicinal Products (ATMPs) for skeletal regeneration.

Prometheus focuses on tissue-engineered ATMPs with a focus on skeletal regeneration. Poietis is interested in using 3D bioprinting of single cell suspensions into large, patterned tissue structured, especially “the laser-assisted bioprinting of multicellular micro-aggregates embedded in ‘bioinks’ for the formation of layered cellular structures.”

What this comes down to is a collaboration to “print” bone that can be used in transplants or other orthopedic, musculoskeletal or spine-related applications.

“Regenerative Medicine holds great promise to provide effective therapies for non-healing large cartilage and bone defects, which remain unmet medical needs,” said Frank Luyten, chairman of the division of Rheumatology at the University Hospitals Leuven and director of Prometheus, in a statement. “When the environment is compromised, such as in long-standing non-union fractures, in the presence of other co-morbidities, such as diabetes and in the aging patient, the endogenous repair potential is insufficient and tissue engineering strategies need to be developed such as in vitro manufactured living provisional tissues. We envision combining Prometheus’ cell-based technologies together with the Poietis’ Bioprinting technology to treat these defects effectively.”

Poietis has a product on the market, Poieskin, a human full-thickness skin model produced entirely by 3D bioprinting. It is made up of a “dermal compartment composed of primary human fibroblasts embedded in a collagen I matrix overlaid by a stratified epidermis derived from primary human keratinocytes.”

The company also has a deal with L’Oreal to produce synthetic hair follicles. What makes Poietis’ technology different is traditional bioprinters push “bioink” through a nozzle. Poietis’ uses a laser that layers cells one at a time at a rate of 10,000 drops per second, all without damaging the cells. Fabien Guillemot, the company’s chief executive officer and chief scientific officer, told The Guardian, they call it 4D bioprinting. “The fourth dimension is time. Because our laser-assisted bioprinting technology can print the cells basically one at a time, it enables us to guide the interaction between the cells and their environment until they produce the biological functions we are looking for.”

And Poietis is hardly the only company working to bring 3D bioprinting (or maybe even 4D bioprinting) into prime time. In August 2017, San Diego company Organovo awarded its 2017 ExVive 3D Tissue Application Award to researchers at Amgen and Medikine. The award is designed to stimulate new applications for Organovo’s ExVive Liver and Kidney Tissue. It uses 3D printing to create functional human tissues, and hopes to someday be able to print tissues that could be transplanted into the human body.

At the moment, these are used in research and drug development, but the entire field shows promise for being able to “print” replacement organs and tissue.

On June 20, San Francisco-based Prellis Biologics hit a speed and resolution record for its attempts to print human tissue with viable capillaries. Its holographic 3D printing technology creates complex the microvascular and scaffolding that allows human tissue to survive. Because cells only survive for a limited time without a blood supply, densely packed tissue only has about 30 minutes or less unless oxygen and nutrients can be supplied through capillaries.

“A major goal in tissue engineering is to create viable human organs, but nobody could print tissue with the speed and resolution needed to form viable capillaries,” said Melanie Matheu, co-founder and chief executive officer of Prellis, in a statement. “At Prellis, we’ve now developed that technology, paving the way for important medical advances and, ultimately, functional organ replacements.”

Other companies in the space include Cyfuse Biomedical, which bioprinted human liver tissue that maintained metabolic functions in 2017; Advanced Solutions Life Sciences, which is headquartered in Louisville, Kentucky, but on June 11 announced it had opened a new facility in Manchester, New Hampshire; Aspect Biosystems, which in May 2018 received $1 million investment from Genome BC to develop its “Lab-on-a-Printer” platform technology; 3D Bioprinting Solutions, a Russian company, which fabricated the first known mouse thyroid gland, which they then implanted into another mouse; Rokit, a South Korean company that manufactures 3D printers is moving into bioprinting, and others.

Erik Gatenholm, chief executive officer and co-founder of Swedish company Cellink, which markets biological “ink” for bioprinting, told The Guardian last year he thought bioprinted skin would be on the market for transplant in five years. “Within 10 years, we’ll start seeing some implants in the cartilage field, either partial or full. Replacement organs, it’s our lifetime. It’s in our lifetime.”