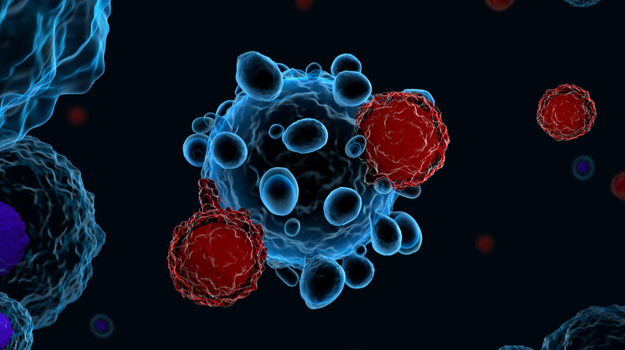 How can you selectively target and destroy cancerous T-cells using other T-cells? This question has plagued researches hoping to apply chimeric antigen receptor (CAR) T-cell therapies to T-cell cancers.

According to the American Cancer Society, there are many types of T-cell cancers, but they are all relatively rare; for example, T-cell cancers make up less than 15 percent of non-Hodgkin lymphomas.

One type of T-cell cancer is T-cell acute lymphoblastic leukemia (T-cell ALL), which is a less common form of ALL where the cancerous cells are precursor T-cells. T-cell ALL accounts for about 15-25 percent of all types of ALL and only 1 percent of all lymphomas (cancer of the lymphatic system, including certain white blood cells called lymphocytes). While T-cell ALL survival rates have been climbing and are now comparable to B-cell ALL rates (around 85 percent), T-cell ALL still has a higher rate of relapse and low survival rates (less than 25 percent) for relapsed disease.

Autologous (or patient-derived) CAR-T cells are challenging to produce against T-cell cancers. When T-cells are removed from the patient’s blood to create the CAR-T cells, it is very difficult to completely purify the cancerous cells from the healthy cells. This runs the risk of inadvertently leaving some cancerous T-cells in the CAR-T cell treatment, which could introduce the cancerous T-cells back into the patient and generate treatment-resistant cells.

Therefore, the only feasible way to target T-cell cancers is to use allogeneic (or healthy donor-derived) CAR-T therapies, where T-cells from a healthy donor are modified to be used in multiple patients.

However, allogeneic therapy comes with its own set of challenges to overcome, namely the life-threatening side effect called graft-versus-host disease (GvHD). GvHD occurs when the donor CAR-T cells recognize the patient’s cells as foreign and attacks them.

Wugen, a St. Louis-based biotech company, is bridging this treatment gap by developing the first allogeneic CAR-T therapy for T-cell cancers. Matthew Cooper, the Co-Founder and CSO of Wugen, and others at the company were inspired to focus on underrepresented patients, including those with T-cell ALL, when they had heard about a patient with a rare T-cell cancer being treated at the Siteman Cancer Center at the Washington University School of Medicine in St. Louis who did not have any treatment options left.

“John DiPersio, (Wugen Co-Founder) was frustrated with the lack of treatment options, especially the lack of CAR-T therapy options, so we set out to create one” Cooper told BioSpace. This led to the birth of Wugen, whose CAR-T platform is based on DiPersio’s and Cooper’s research from Washington University School of Medicine in St. Louis.

Wugen’s CAR-T cells have been gene-edited to remove the T-cell specific target antigen (reducing their “friendly fire” self-killing ability and making them more effective) and the T-cell receptor (reducing the risk of GvHD).

WU-CART-007 is being developed to treat relapsed and refractory T-cell ALL and other non-Hodgkin T-cell lymphomas. CD7 was chosen to target because it is expressed on many types of T-cell cancers. It is also expressed on the majority of natural killer (NK) non-Hodgkin lymphomas and leukemias, as well as about 25 percent of acute myeloid leukemias (AMLs), meaning it could be used to target other types of T-cell and NK cancers.

To create WU-CART-007 cells, CRISPR/Cas9 is used to remove both the CD7 antigen and the T-cell receptor (specifically the alpha chain) with high accuracy – about 95 percent of resulting CAR-T cells lack both receptors. Wugen drew inspiration from the successful first-in-human trials of UCART19 (being developed by Allogene and Servier), which is an allogeneic CAR-T therapy generated by removing the alpha chain of the T-cell receptor.

In multiple T-cell ALL cell lines, WU-CART-007 killed an average of 95 percent of T-cells in a target-specific manner. In mice with T-cell ALL, T-cells without the T-cell receptor were first tested to evaluate their ability to induce GvHD. These T-cells did not induce GvHD; by removing the T-cell receptor, signaling is stopped and the CAR-T cells can no longer recognize the patient as foreign, effectively preventing GvHD.

In T-cell ALL mice who received WU-CART-007, there were no detectable T-cell ALL cells in their blood. Excitingly, WU-CART-007 cells were still detectable in the blood 6 weeks after their injection. This long-lived persistence in mice can be attributed to removing the CD7 target antigen and preventing CAR-T cell self-killing.

The major serious side effect of this CAR-T therapy is anticipated to be T-cell aplasia, where the patient has low or no T-cells, as T-cell aplasia was seen in mice treated with WU-CART-007. While the CAR-T targets a certain T-cell specific antigen, both healthy and cancerous T-cells express the target antigen, so the CAR-T cells will indiscriminately kill all of the patient’s T-cells. T-cell aplasia is also a common serious side effect after bone marrow transplants. One potential solution to the possible long-term T-cell aplasia problem is including so-called “suicide genes” in the CAR-T, which can be turned on and cause the CAR-T cells to die at a specified time.

So far, preclinical studies have shown that Wugen’s platform is a “clinically feasible allogeneic T-cell therapy for T-cell cancers.” While all of the work so far has been preclinical, Wugen is currently planning a clinical trial studying WU-CART-007 in relapsed and refractory CD7+ T-cell ALL, which is anticipated to begin early next year.

Cooper commented that Wugen’s allogeneic CAR-T strategy is the “only clinically viable strategy for T-cell malignancies. This treatment can give patients with no other options a curative option.”