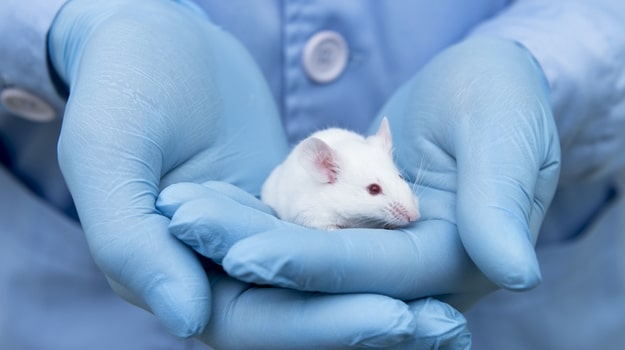 Investigators from Rush University Medical Center developed two nasally delivered compounds that slowed the spread of alpha-synuclein in mice. Alpha-synuclein is an abnormal protein that collects in the brain in what are called Lewy bodies. Lewy bodies are hallmarks of Parkinson’s disease. They are also linked to the development of Lewy body dementia and a rare neurological disorder, multiple system atrophy (MSA). They published their research in the journal Nature Communications.

The peptides they developed are TLR2-interacting domain of Myd88 (TIDM) and NEMO-binding domain (NBD). They are delivered via the nose and in mice, slowed inflammation in the brain and halted the spread of alpha-nuclein in a mouse model of Parkinson’s disease. The compounds also improved the gait, balance, and other motor functions in the mice.

“If these results can be replicated in patients, it would be a remarkable advance in the treatment of devastating neurological disorders,” said Kali-pada Pahan, the Floyd A. Davis Professor of Neurology at Rush University and a research career scientist at the Jesse Brown VA Medical Center.

Researchers at the University of Bath have developed a two-minute passive-test, “Fastball EEG” to test for early Alzheimer’s disease. The participants look at a series of flashing images on a computer over two minutes while brain waves are measured via an EEG cap. They found it to be highly effective at identifying small, subtle changes in brain waves when a person remembers an image. Important to the possible development for broader populations, the individuals taking the tests don’t have to understand the task or respond and may not even be aware of their memory response. The researchers say it is cheap, affordable, and depends on pre-existing technology already used in hospitals.

Investigators at the University of Pennsylvania School of Medicine believe a class of diabetes drug called GLP-1R agonists, such as Trulicity and Rybelsus, may protect against glaucoma in diabetic patients. They evaluated retrospective data of 1,961 diabetic patients who were new users of GLP-1R agonists and matched them to 4,371 unexposed control patients. After 150 days on average, 10 patients in the drug group were newly diagnosed with glaucoma (0.5%) compared to 58 patients (1.3%) in the control group. This suggests that GLP-1 receptor agonists may decrease a diabetic’s chance of developing glaucoma by half.

Scientists from UT Southwestern Medical Center found that the inflammatory skin condition, eczema, may originate from poorly regulated sex hormones. They note that there is a tendency to think of eczema as a dry-skin condition and treat it with moisturizers. But in this study, they demonstrated that a gene that helps make sex hormones play a role in the skin making its own moisturizers. A gene called HS-D3B1, which makes an enzyme called 3b-hydroxysteroid dehydrogenase 1, is up to 60 times more active when exposed to interleukin 4 and 13 (IL-4 and IL-13). Atopic dermatitis has been linked to overactivity in genes responsible for IL-4 and -13. The 3b-hydroxysteroid dehydrogenase 1 enzyme plays a key role in the production of sex hormones such as testosterone and progesterone but had never been associated with atopic dermatitis and skin lipid production. HSD3B1 tends to be overactive in patients with eczema. HS-D3B1 may be a new target for atopic dermatitis and eczema.

Exosomes are a form of extracellular vesicle made up of protein, DNA and RNA. They are excreted by cells and can also be picked up by distant cells, where they may affect cell function. Researchers at the National Institute of Mental Health, part of the National Institutes of Health, used exosomes to deliver proteins into mice infected with HIV. The protein attached to the HIVs’ RNA and blocked it from replicating, resulting in decreased HIV levels in the bone marrow, spleen and brain. Although a long way from being used in people, it represents a potential new way of preventing HIV. The researchers hope to study the use of exosomes to deliver therapies that can help anti-HIV CAR T-cells in killing HIV-infected T-cells.

Parkinson’s patients who are treated with Levodopa (L-dopa) almost always develop a side effect called L-dopa induced dyskinesia (LID), which causes involuntary movements in the limbs, face, and torso. Researchers at the Graduate Center, CUNY and the CUNY School of Medicine demonstrated that drugs that increase signaling by a protein known as sonic hedgehog (Shh) can slow or inhibit LID. Working with rodent and non-human primate models, they administered L-dopa with sonic hedgehog agonists, and found that it attenuated the expression of LID. Parkinson’s is caused by the death of dopamine neurons. Those neurons also produce other neurotransmitters, including GABA, glutamate, and Shh. Shh has not previously been viewed as a neurotransmitter, but this study suggests that it acts as a neuromodulator.

Tumor cells improve their survival by suppressing immune cells. A study out of Weill Cornell Medicine found a new way to counter the immunosuppressive ability. They identified a group of anti-immunosuppressive factors secreted by club cells, which line airways in the lungs. In a mouse model of lung cancer, they found these club cell factors inhibit potent immunosuppressive cells known as myeloid-derived suppressor cells (MDSCs). Cancer cells often recruit MDSCs to help evade immune cells. But inhibiting MDSCs caused an increase in the number of T-cells at the tumor site, improving the effectiveness of anti-PD-1 checkpoint inhibitors.

“These club cell-secreted factors are able to nullify immune suppressor cells that otherwise help tumors escape an effective anti-tumor response,” said Vivek Mittal, co-senior author of the study and Director of Research at the Neuberger Berman Lung Cancer Center and the Ford-Isom Research Professor of Cardiothoracic Surgery at Weill Cornell Medicine. “We’re excited by the possibility of developing these club cell factors into a cancer treatment.”