New Study Says Research Scientists, Engineers Among Most "Lonely" at Work: Here's How to Stay Connected When You Work in the Sciences 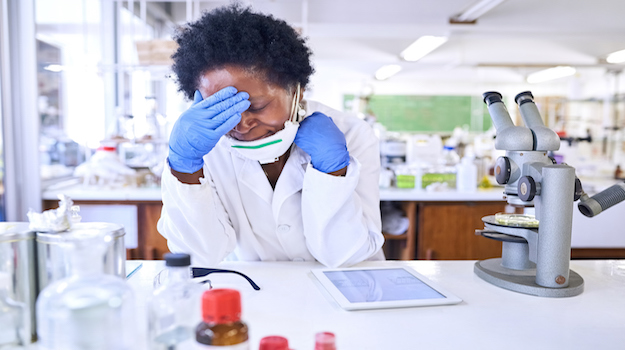 The Harvard Business Review recently published the results of a workplace survey on loneliness, and research scientists and engineers topped the list of most lonely employees (falling only behind lawyers as the loneliest profession).

In a survey of over 1,600 full-time employees, the authors collaborated with BetterUp, a workplace consulting firm, to identify which professions are most at risk for feeling lonely at work and the most important factors that combat loneliness and increase social cohesion.

The study also found reports of increased loneliness at work among single people with no children. They also point out that salary, geography, gender, race, or ethnicity were not reliable or strong predictors of loneliness at work.

But there’s more at stake here than feeling lonely at work. As the authors point out, the “epidemic” of loneliness in the workplace has a significant impact on productivity, health, and overall well-being. Lonely workers are more likely to perform poorly on the job, change jobs or quit more frequently, report poor satisfaction with their jobs, and experience fewer promotions, not to mention the negative health and wellness outcomes associated with feeling isolated.

In fact, researchers in the UK (which takes the issue of loneliness at work so seriously that it recently appointed a “minister of loneliness” to address it), estimates total business losses per year due to high turnover, poor productivity, and health care costs of lonely workers at around $3.5 billion.

So, what can you do to combat loneliness in the workplace?

Don’t eat alone. Force yourself to at lunch with a colleague, and go outside of the workplace (or at least away from your desk) for lunch at least a few times a week. Even 20 or 30 minutes of social time can make a big difference in your workday.

Talk about your work. Working in a silo can be one of the most isolating habits to get into at work, so don’t feed into the cycle of solitude. This is especially true for researchers. One of the best ways to break this cycle is to discuss your work with others, even if they’re not directly involved with the project or on your team. They’ll appreciate the insights into what you’re doing, and you may get some good ideas from someone who has a different perspective.

Compliment others. The HBR article also pointed out that “helping others find the meaning in their own work magnifies the meaning one experience personally,” and that respondents who said they felt more of a shared meaning or purpose with their colleagues were associated with more frequent promotions and lower turnover rates. Approach your co-workers with curiosity and openness, show interest in their projects (even if they differ greatly from your own), and be generous with your positive feedback. They will likely reciprocate, creating a nice back and forth that gives you a feeling of being “connected.”

Collaborate, when you can. Actively identify key opportunities within your own workload where you can bring in other colleagues, teams, or departments to collaborate. Work cross-functionally and across disciplines, and recognize the value in these shared resources, skill sets, and perspectives.

Look for a new job. If your company or institution has created a rigid environment that leaves very little room for collaboration, social interaction, or opportunities to develop positive work relationships, then it may be time to think about finding a new environment that is more likely to provide you with the tools and culture to support your long-term success, job satisfaction, advancement, and overall happiness.

Don't ignore your personal life. The study also found that people who had stronger emotional ties and a good support system outside of their jobs reported less loneliness than others with fewer friends and family. "The more people you have around in your private life," the authors say, "the better for keeping loneliness at bay."