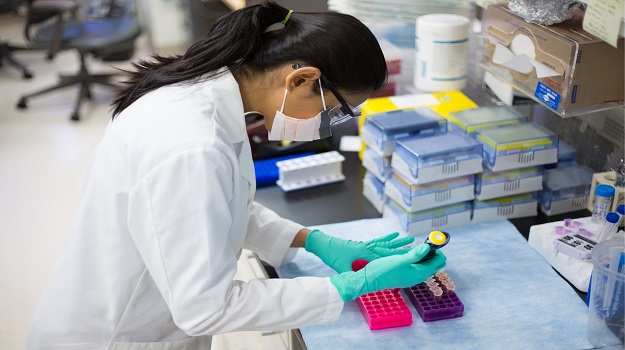 Researchers at the University of Pennsylvania published research in the journal Nature Biotechnology, describing their use of AAV-vector gene therapy to modify the PCSK9 gene related to cholesterol production in monkeys. James Wilson and his team used adeno-associated virus (AAV) to deliver CRISPR gene editing tools directly to cells where they cut the PCSK9 gene in a specific location. They originally tested it in mice successfully, but it did not work in rhesus macaques. They then used AAV to deliver a different gene-editing tool, meganuclease.

“It worked incredibly well,” Wilson said in a statement. Four months after the injection, 64 percent of liver cells carried the knocked-out PCSK9 gene in the six monkeys. In the highest doses, the monkeys’ blood level of PCSK9 protein dropped by 84 percent and LDL cholesterol dropped by 60 percent. Although still unexplained, the edited cells stopped manufacturing the meganuclease, and it also caused liver enzymes to increase, indicating an immune response. Since the meganuclease came from algae, the immune response was expected. The continuing lack of the meganuclease can be considered a positive action, because it doesn’t lead to unwanted gene edits, but it does lay bare the question of long-term use of the technique.

Although cocktails of antiviral drugs have made HIV/AIDS a treatable chronic disease in many cases instead of a fatal disease, the Holy Grail of HIV research is still a vaccine. Researchers with Harvard Medical School published the results of an Phase I/IIa clinical trial of an HIV vaccine in The Lancet. The vaccine was tested in 400 healthy adults in southern Africa to determine the safety and efficacy of the HIV-1 vaccine candidate, and the results have led to the launch of a broader trial in 2,600 women at risk for acquiring HIV. This vaccine uses a “mosaic” of pieces of different HIV viruses to draw immune responses against a variety of HIV strains.

“These results represent an important milestone,” said Dan Barouch, director of the Center for Virology and Vaccine Research at Beth Israel Deaconess Medical Center and professor of Medicine at Harvard Medical School, who led the study, in a statement. “This study demonstrates that the mosaic Ad26 prime, AD26 plus gp140 boost HIV vaccine candidate induced robust immune responses in humans and monkeys with comparable magnitude, kinetics, phenotype, and durability and also provided 67 percent protection against viral challenge in monkeys.”

He also encourages caution, noting that “the ability to induce HIV-specific immune responses does not necessarily indicate that a vaccine will protect humans from HIV infection.”

Using Gene Editing to Cure Beta-Thalassemia In Utero in Mice

Scientists at Carnegie Mellon University and Yale University published research in the journal Nature Communications describing their use of gene editing to treat beta-thalassemia in mice embryos. They used a peptide nucleic acid-based gene editing technique that had been successfully used in adult mice to treat beta-thalassemia via in mice fetuses that carried a mutation in the beta-globin gene.

Danith Ly, professor of chemistry in Carnegie Mellon’s Mellon College of Science, said in a statement, “Early in embryonic development, there are a lot of stem cells dividing at a rapid pace. If we can go in and correct a genetic mutation early on, we could dramatically reduce the impact the mutation has on fetal development or even cure the condition.” With a single injection of the therapy, they corrected six percent of the mutations, which was enough to result in dramatic improvements in the mice’s beta-thalassemia symptoms—enough to be considered cured.

Massachusetts Institute of Technology researchers published research in the journal Nature Biotechnology describing the developing of nanoparticle “backpacks” that hold drugs that stimulate the immune system. The hope is this will be away to improve immuno-oncology approaches in solid tumors. Most immuno-oncology therapies have been more effective in blood cancers, while solid tumors have been more resistant to these approaches.

“We found you could greatly improve the efficacy of the T cell therapy with backpacked drugs that help the donor T cells survive and function more effectively,” said Darrell Irvine, professor of biological engineering and materials science and engineering, and a member of MIT’s Koch Institute for Integrative Cancer Research, in a statement. Irvine is also senior author of the study. “Even more importantly, we achieved that without any of the toxicity that you see with systemic injection of the drugs.”

Does Ketogenic Diet Cause Cancer but Help Cancer Drugs?

A class of cancer drugs called PI3K inhibitors have well-described side effects—high blood sugar and increased insulin levels. Typically, this side effect passes, but in patients with diabetes or insulin resistance, it can be prolonged, and the therapy is often discontinued. Insulin stimulates PI3K signaling in tumors, which can cause cancer growth. Researchers at the Meyer Cancer Center at Weill Cornell Medicine in New York published research in Nature describing how in mice a ketogenic diet seemed to improve the effects of PI3K inhibitors.

Lewis Cantley, director of the Meyer Cancer Center and his team investigated several different kinds of cancer in mouse models to show that glucose and insulin can block PI3K inhibitors. They gave mice a ketogenic diet to lower blood glucose or used a drug known as a SGLT2 inhibitor. The diet made the drug more effective in slowing the growth of cancer cells in the mice. Cantley and Siddhartha Mukherjee, his collaborator at Columbia University, are planning a clinical trial with Bayer to evaluate the combination of a ketogenic diet and Bayer’s Aliqopa (copanlisib) in patients with lymphoma or endometrial cancer.

A ketogenic diet is high in fat with moderate protein and low carbohydrates. Many cancer centers are recommending caution in using the diet.

Researchers with the Washington University School of Medicine in St. Louis published research in the Journal of the American Society of Nephrology describing their use of gene therapy to treat chronic kidney disease in mice. Benjamin Humphreys, director of the Division of Nephrology at Washington University and researchers from Harvard University and Massachusetts Institute of Technology used adeno-associated virus (AAV) to deliver genetic material directly to targeted kidney cells. They looked at six different AAV viruses in mice and stem-cell-derived human kidney organoids. Anc80, a synthetic virus developed by the researchers, was able to reach two types of cells that are linked to chronic kidney disease.

Although early work, Humphreys said in a statement, “The interesting thing about the adeno-associated viruses is that they persist in the body for many months, potentially giving a therapeutic gene a chance to do its work. Chronic kidney disease is a slowly progressive disease so that is an advantage. After many years of research, we could envision that patients would need injections maybe twice a year as opposed to every week, like with chemo. There has been so little innovation in kidney treat. We believe this is a positive step forward.”