What You Need to Know About Shepherd Therapeutics 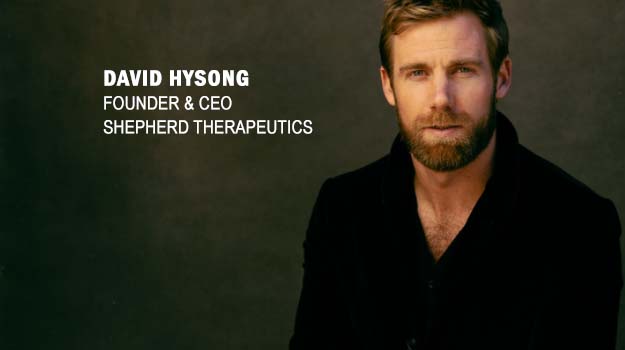 There are many unusual things about Shepherd Therapeutics, but one of them is its origin. David Hysong, the company’s founder, is not your typical biotech founder, which is usually a researcher who discovered a compound, who then hooks up with venture capitalists to start a company to develop it.

Hysong was a civilian who was selected to attend officer training for the U.S. Navy Seals. He finished the course, but contracted a lung infection called SIPE (Swimmer Induced Pulmonary Edema). It was suggested that he look for more medical attention, and as a result, found he had an ultra-rare and untreatable form of head and neck cancer, Adenoid Cystic Carcinoma (ACC).

“I had a much different life plan,” Hysong told BioSpace. “I was going to go to grad school at Harvard. After the diagnosis, I basically took an approach to diving in and learning as much as I could to get a sense of the landscape. I had some connections to some big figures in biotech and realized how underserved rare indications were from a developmental standpoint. And I had a chance to interact with the founders of a researcher foundation behind my disease, the ACC Research Foundation.”

He leveraged his Harvard network and partnered with Gene Williams, a former senior vice president of Genzyme, to found Shepherd Therapeutics.

Shepherd Therapeutics’ approach uses software, artificial intelligence and proprietary algorithms to first map out what is known about every rare cancer, which the company calls “mapping the mutational landscape,” then adding in various qualitative variables like patient profiles, environmental data and demographics. This then is used to inform the best treatment modality.

Hysong says, “In some ways we’re almost like a mini-pharmaceutical company, how we’ve taken an approach to project identification, scouring opportunities, picking up smaller biotechs, things that come out of academic research labs, and projects at an inflection point for certain rare cancers. Then looking at how you partner that with multiple drug combinations and what delivery technology might be most appropriate. Not a perfect biotech, but more of a platform approach.”

David Hysong – Founder, Chief Executive Officer. Hysong is also the executive director of the Shepherd Foundation. He is a Forbes 30 Under 30 honoree and Spotlight Health Scholar at the Aspen Institute.

Eugene Williams – Co-founder and Advisory Board Chair. Williams is the executive chairman of ProMis Neurosciences, a biotech company focused on Alzheimer’s disease. He was formerly senior vice president of Program and Portfolio Management at Genzyme.

Jamie Dempsey Barber – Chief Research Officer. Barber was formerly the head teaching fellow for both molecular and cellular biology courses at Harvard University, as well as the instructor of “The Biology of Cancer” course at Harvard Extension School.

The company’s in-house projects are currently in the preclinical phase. Shepherd says, “We are hopeful, looking to file our first IND in the next six to twelve months. We’ve narrowed the final list to 14 indications across about four different leads and projects. We’ll end up prioritizing one or two of them. ACC is up there, but there are some others as well and we’ll be able to focus on oncology and only on rare cancers.”

Shepherd says the question of competition is an interesting one. “When I asked my execs who were at Genzyme for years who our competition was, they say as far as this approach there isn’t anyone,” he says. “We’ve done a competitive analysis and have identified at least 300 biotechs that mention a rare type of cancer somewhere in their materials. But so far as a company taking this kind of systematic approach looking to be a development site for different types of rare cancers, we don’t think there’s anyone. There are people working on specific types of diseases that are classified as rare, so in that respect there’s quite a bit of competition. A double-edged answer there.”

Shepherd Therapeutics has external collaborations with the National Cancer Institute  and the Massachusetts Institute of Technology. Otherwise, Shepherd says, “It’s pretty early. We’ve been approached a couple times, but we’re still holding on for a while longer. People are interested in what we’re doing and are interested in a conversation.”

What to Look For

Shepherd hopes to get a project into the clinic in the next year and from there, of course, hopes to continue through Phase III and regulatory approval.

But the business model is broader than that. Hysong says, “We built this whole business model to hopefully shore up and support the entire ecosystem in cancer. We have the nonprofit side and a lot of interest so far. We hope we can raise the kind of funds to support the existing research being done, but we’d also like to support new research foundations that are disease-specific, and to work with some of the more successful small foundations and provide a pilot grant to support and expand the ecosystem. That’s our efforts on the nonprofit side. On the profit side, we hope to remain private. Our long-term goal is to build a fully integrated pharmaceutical company and we’ll see if that’s possible.”