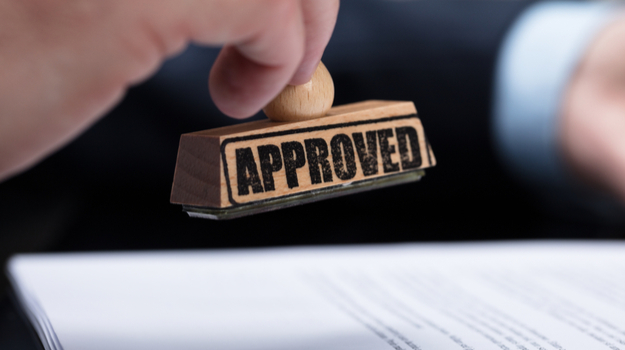 Denmark-based Bavarian Nordic A/S became the first company to win approval for the first vaccine designed to prevent smallpox and monkeypox disease in adults who are considered at high risk of the viruses, which are viewed as bioterrorism threats.

Following the U.S. Food and Drug Administration (FDA)'s historic approval of Jynneos, shares of Bavarian Nordic spiked more than 21% to close at $10.93. The vaccine is the only approved non-replicating smallpox vaccine in the U.S. and the only approved monkeypox vaccine anywhere in the world, the company said.

Jynneos was approved for use in people with weakened immune systems and those with eczema or with household members with eczema who are more susceptible for contracting the viruses in places where the diseases are more evident.

Paul Chaplin, president and chief executive officer of Bavarian Nordic, called the approval of Jynneos a “tremendous milestone” for the company and for global health. Working closely with the U.S. government on the development of the vaccine, Chaplin said Jynneos is the culmination of a 15-year partnership that “started with a call from the NIH for a safer smallpox vaccine.” In partnership with the Biomedical Advanced Research and Development Authority (BARDA), Chaplin said Jynneos has now been delivered to the Strategic National Stockpile for use in an emergency.

“We are committed to the continued supply of vaccines to the U.S. and thank them for their global leadership on biodefense. We are also particularly pleased with the additional indication to protect against monkeypox that creates new commercial opportunities for Jynneos,” Chaplin said in a statement.

Smallpox is a highly contagious and deadly disease. Unique to humans, the disease is caused by the variola virus, and is transmitted from person to person through direct contact with contaminated fluids and objects, as well as through the air. Historically, about 30% of those who became infected with smallpox died from the illness. Although it has been eradicated, smallpox is considered by many governments to be a significant bioterrorism threat. Monkeypox is a rare viral zoonotic disease similar to human smallpox, Monkeypox infection is less transmissible human-to-human than smallpox and also less deadly. Until recently, infections of monkeypox in humans had mostly been limited to central and western regions of Africa, where the virus is naturally occurring. However, during the ongoing monkeypox outbreak in Nigeria, increased human-to-human transmission has been observed.

For the U.S. government, the approval of the vaccine is considered a breakthrough in meeting its commitment to developing this type of vaccine for people who are at high risk of adverse reaction to traditional, replicating smallpox vaccines. Rick Bright, deputy assistant secretary for preparedness at the Department of Health and Human Services and response and director of BARDA, said the approval of the vaccine enhances the nation’s biodefense capabilities, but also demonstrates what can be accomplished for the American people through public-private partnerships.

“The years of dedication working with Bavarian Nordic on this vaccine ultimately mean that the U.S. is better prepared to save lives if an emergency occurs involving one of the deadliest diseases the world has ever known,” Bright said in a statement.

Not only has Bavarian Nordic’s development of a key drug in the fight against the re-emergence of smallpox, a disease eradicated across the globe, and monkeypox, been rewarded with an FDA approval, the regulatory agency granted the company a Priority Review Voucher under the Material Threat Medical Countermeasure PRV program. The voucher can be used to accelerate the FDA’s review of a future human drug application and is a key asset that can be sold to other another company for a significant sum of money. Bavarian Nordic said it intends to sell the voucher to an undisclosed third party.