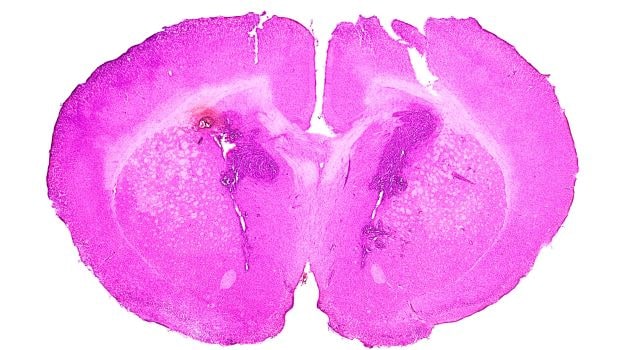 Adastra Pharmaceuticals’ positive results from a Phase Ib trial of its therapy for recurrent high-grade glioblastomas suggest an effective treatment could be available within the next several years. If so, it would be a major breakthrough for patients affected by this lethal disease.

Results of that trial, announced today, demonstrated that patients achieved highly meaningful progression-free survival and tumor regression and that the drug was well-tolerated by patients. Current treatments for recurrent high-grade gliomas, in contrast, offer little or no proven benefit, leading to a mortality rate of nearly 100%.

Adastra’s lead compound, zotiraciclib (ZTR/TG02), “is a multi-kinase inhibitor of cyclin-dependent kinase (CDK) and with a high degree of specificity to CDK9,” Scott Megaffin, CEO of Adastra Pharmaceuticals, told BioSpace. “ZTR has a relatively unique mechanism of action resulting in a depletion of short-lived proteins such as Myc and Mcl-1, which have been considered almost undruggable antiapoptotic oncogenes.”

ZTR works by inhibiting CDK9 and interrupting the synthesis of RNA, thus depleting Myc and starving the mitochondria of the proteins needed for replication and consequential depletion of glucose. This depletion causes apoptosis among tumor cells.

“Uniquely, ZTR does not affect healthy cells, hence it appears to be very promising for patients with high-grade glioblastomas,” Megaffin said.

Both the U.S. Food and Drug Administration (FDA) and the European Medicines Agency (EMA) have granted zotiraciclib orphan drug status for the treatment of glioma.

ZTR/TG02 crosses the blood-brain barrier, overcoming what has been a key shortfall of many drugs in this space. In a recently conducted study conducted by the National Cancer Institute, the results support the preclinical findings “ZTR exhibited 2.5 times the concentration in the brain as was observed in the blood plasma,” Megaffin said. That indicates this drug can reach therapeutic concentrations in the targeted tissues without the systemic toxicity that has caused many other drugs to fail in the treatment of gliomas. Consequently, patients can continue their therapies longer.

“Because there is no cure for this condition, progression-free survival is very meaningful indicator of efficacy for a cancer that represents one of the highest unmet needs within oncology,” Megaffin said. “Results of this trial show that the combination therapy provided progression-free survival that extended well beyond the standard of care alone. In the same vein, the patients who responded favorably exhibited either stable disease or major tumor reductions as determined by MRIs.”

Dosage data, determined in this Phase Ib trial, “provides the balance between therapeutic benefit and acceptable levels of toxicity. Thus, the investigators are highly encouraged in their ability to manage these patients effectively,” he said.

Detailed results are to be submitted for presentation at an upcoming oncology conference later this year, and a leading medical journal for publication.

The next step is to discuss this data with regulators and to design a pivotal trial. “Planning is underway, and we hope to begin a registration-enabling clinical study in 2Q 2021,” Megaffin shared.

“Investigators at the NCI and our clinical advisers in the U.S. and Europe were robustly encouraged by these results from both the efficacy and tolerability standpoint. They are strongly supportive of Adastra undertaking next steps,” Megaffin added.

Within a registration-enabling trial, Adastra plans to focus upon an enriched population of patients that have been identified supported by the mechanism of action of ZTR.  “Patients with IDH mutant gliomas were identified by the NCI researchers as an enriched population and a focus for us,” as the company prepares for discussions with regulators.

Meanwhile, a Phase Ib trial of zotiraciclib is continuing. It is being conducted by the European Organisation for Research and Treatment of Cancer (EORTC) and involves a slightly different group of patients. “Final results from that study are likely a year away,” Megaffin said.

Small molecules have seen a rebound in recent years as scientists have learned more about where mAbs and checkpoint inhibitors could be useful. “In high-grade gliomas, multi-kinase inhibitors like zotiraciclib may offer a mechanism that works to evade resistance mechanisms that some cancer cells develop,” Megaffin said.