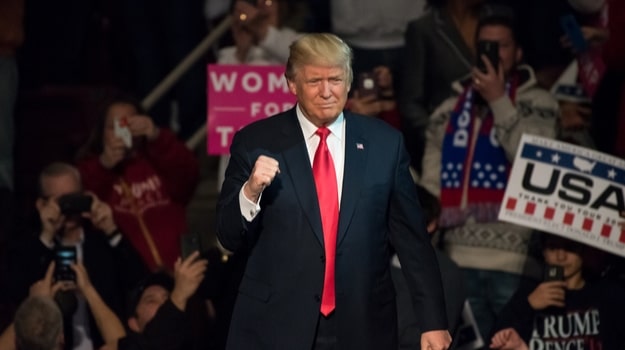 President Donald Trump pledged a vaccine for the novel coronavirus that causes COVID-19 would be available by the end of the year. The remarks were made during an acceptance speech for the Republican Party presidential nomination Thursday night.

Although no vaccines in development have passed through the final stages of clinical studies, Trump predicted that there will have a safe and effective vaccine this year and added that “together we will crush the virus.”

“We are delivering life-saving therapies, and will produce a vaccine before the end of the year, or maybe even sooner,” he said, according to STAT New.

In his convention speech, which was made on the White House grounds, Trump did not provide details as to which vaccine candidate under development could potentially be approved by the end of the year.

There have been rumors the U.S Food and Drug Administration could grant an Emergency Use Authorization to one of the vaccines under development that is being supported by Operation Warp Speed, the U.S. government’s response to accelerating therapies, vaccines and diagnostics against the pandemic. However, FDA Commissioner Stephen Hahn has promised that approval of a vaccine would only be granted if the data supports the FDA’s threshold of 50% efficacy against SARS-CoV-2, the virus that causes COVID-19. On Twitter this week, Hahn speculated that the agency’s vaccine advisory committee could meet in October to begin assessing safety and efficacy data ahead of a potential approval. He added that the committee’s recommendations are not binding and the general public will be able to see the vaccine data ahead of any regulatory action during the advisory process.

“FDA scientists will judge vaccine safety and effectiveness solely on the basis of good scientific data,” Hahn wrote on Twitter this past Wednesday. “We at FDA recognize that we must build public trust so there is confidence in future decisions about vaccines for COVID-19. I am concerned when I see public surveys that many people will decline taking a vaccine.”

Hahn’s comments follow a controversy over statements he and the administration made in reference to Emergency Use Authorization of convalescent plasma that was granted Sunday. Hahn was forced to walk back some of the claims made regarding the efficacy of the use of plasma containing antibodies taken from patients that have recovered from the virus.

“I have been criticized for remarks I made Sunday night about the benefits of convalescent plasma,” Hahn tweeted. “The criticism is entirely justified. What I should have said better is that the data show a relative risk reduction, not an absolute risk reduction.”

During his convention speech, Trump also pointed to his recent actions aimed at lowering drug prices, including the use of a “favored nations” clause that would set the price of drugs purchased by the federal government based on what other nations across the globe pay. Last month, the president signed four Executive Orders, including the favored nations plan, that he expects will lower the costs of drugs in the United States. Following the close of the convention Thursday, Trump tweeted that “prices will plunge” because of his plan.