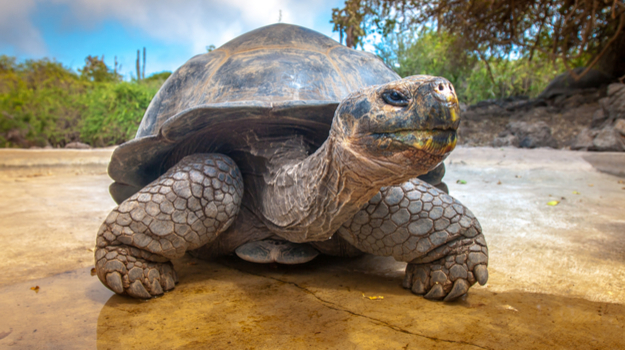 A few years ago, in 2012, Lonesome George, the last of the Pinta Island tortoises of the Galapagos, died. The last of his kind, George was more than one hundred years old.

The researchers also believe their research can help understand the evolution of the giant tortoises. After all, they have quite a pedigree in that area—they were key to inspiring Charles Darwin’s “Origin of Species” and the theory of evolution and natural selection when he noted that the tortoises’ shell shapes were adaptations to their environments.

George and giant tortoises aren’t the only large animals to provide insight into the immune system and longevity. Elephants, for example, have been the focus of quite a bit of research in recent years into longevity and their resistance to developing cancer.

In 2015, Joshua Schiffman, associate professor of Pediatrics at the University of Utah and Medical Director of the High Risk Pediatric Cancer Clinic at Huntsman Cancer Institute, described what is known as Peto’s Paradox. Schiffman and his team found that elephants have additional copies of a tumor-suppressor gene called p53. While humans have a single copy, elephants have 20.

And in August of this year, researchers with the University of Chicago led by Vincent Lynch, published a paper in the journal Cell Reports titled, “A Zombie LIF Gene in Elephants Is Upregulated by TP53 to Induce Apoptosis in Response to DNA Damage.”

LIF genes, which stand for Leukemia Inhibitory Factor, are linked to enhanced fertility. But in elephants, they identified LIF6, which was unique to elephants, and among other things, is known to kill damaged cells. Most mammals have only one copy of LIF. Elephants have seven to 11.

In terms of George and giant tortoise research, Adalgisa “Gisella” Caccone, a researcher at Yale University, who had been working for years on the tortoises, teamed up with Carlos Lopez-Otin, a professor at the University of Oviedo in Spain whose research focused on cancer and aging in humans. Together, with a larger team, they sequenced Lonesome George’s entire genome, as well as that of an Aldabra giant tortoise from the Seychelles, who are rumored to live up to 250 years (well, at least one did).

They then compared the tortoise genomes to other mammals, fish, birds and reptiles. They found a mutation in a gene called IGF1R, which has been linked in humans and mice to longevity. They also found that George and other tortoises had more copies of gene associated with energy regulation, DNA repair, tumor suppression and immune defense. For example, most mammals only have a single copy of PRF1, a gene linked to immune response, but the tortoises had 12 copies.

Kenro Kusumi, a professor of life sciences at Arizona State University, told The New York Times, that this type of research is only going to expand as the genomes of more reptiles are sequenced. For example, many reptiles can regenerate entire body parts. Others, including tortoises, can also hibernate in order to survive extreme conditions. Kusumi speculates that a similar state could be used by humans in space travel.

“The beauty of having these genomes is that it’s a great starting point to ask questions,” he told The New York Times. “Even after death, Lonesome George is teaching us things—just like his ancestors taught Charles Darwin.”