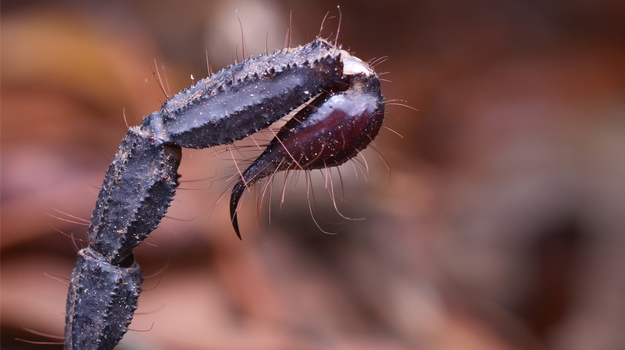 With the opioid crisis gripping the United States, many doctors have been looking at alternate treatments to help patients with long-term chronic pain. A new study shows that the venom from a scorpion sting could provide a solution.

Researchers at the University of California, San Francisco (UCSF) have discovered that a scorpion toxin can actually be harnessed to target the wasabi receptor, which is described as a “chemical-sensing protein” found in nerve cells. The wasabi receptor is responsible for the “sinus-jolting sting of wasabi,” the researchers noted. Because the scorpion toxin triggers a pain response, the researchers believe it will be useful as a tool to benefit chronic pain and inflammation and could actually lead to the development of new types of non-opioid pain relievers.

Over the course of the researcher, scientists from both UCSF and the University of Queensland, isolated the scorpion toxin, which is a short protein. The toxin was extracted from a scorpion native to Australia, the Australian Black Rock scorpion. The researchers tested several kinds of venom before settling on the scorpion. They were specifically looking for venom that activated the wasabi receptor, which is also known as TRPA1. When the receptor is activated, it opens a channel which allows sodium and calcium ions to move into the cell and induce pain and inflammation.

Calling TRPA1 the body’s “fire alarm” for chemical irritants in the environment, UCSF doctoral student and lead author John Lin King, said when the receptor encounters a harmful compound, “specifically, a class of chemicals known as ‘reactive electrophiles,’” it is activated to let the body know it is being exposed to something dangerous and to move away. As an example, Lin King noted that many environmental pollutants, including cigarette smoke, can trigger wasabi receptors that line the body’s airway. It can induce coughing and inflammation. Certain foods, such as wasabi as noted before, can also trigger the receptors.

When it comes to the scorpion toxin, that creature’s toxin seems to only activate the wasabi receptors in mammals, the researchers said. They speculated over time, the scorpion’s venom evolved to protect itself from mammalian predators.

Over the course of their study, the researchers found that the scorpion’s toxin had a unique mode of action. The way the venom activates the wasabi receptor was “novel and unexpected,” the researchers noted. The toxin contains what was described as an “unusual sequence of amino acids” that gives it the ability to penetrate the membrane of the cell and pass straight through, avoiding more traditional ways of entry, such as endocytosis. Lin King noted that if they can understand how the toxin can pass through the membrane, then they could potentially replicate that to provide ways for some medications to get through the cell’s barrier that hasn’t been penetrable before. The findings of the study were published in the journal, Cell.

“The discovery of this toxin provides scientists with a new tool that can be used to probe the molecular mechanisms of pain, in particular, to selectively probe the processes that lead to pain hypersensitivity,” Lin King said in a statement. “And for those interested in drug discovery, our findings underscore the promise of TRPA1 as a target for new classes of non-opioid analgesics to treat chronic pain."