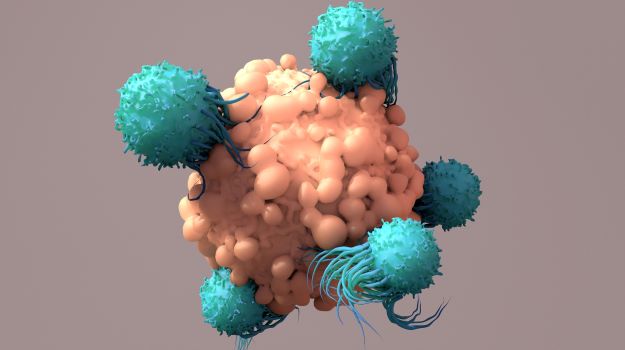 CAR-T cell therapy revolutionized the treatment of hematologic cancers, but it’s still a time-consuming and expensive process. But researchers may have just solved the turnaround-time challenge for CAR-T. For that and more research news, continue reading.

A type of immuno-oncology therapy, CAR-T, involves collecting a cancer patient’s immune cells, engineering them in the lab to express specific cells to attack the cancer, and infusing them back into the patient. In hematologic cancers, it works brilliantly, but it’s still time-consuming and expensive. Researchers at the University of Pennsylvania have developed a process that can turn the typical engineering process of nine to 14 days into just 24 hours. They published their research in the journal Nature Biomedical Engineering. The key to their approach focuses on the lentiviral vector that delivers the CAR gene to T cells. They developed a process to overcome an initial activation step that lentiviral vectors typically require to transfer genes like CAR.

“While traditional manufacturing approaches used to create CAR T cells that take several days to weeks continue to work for patients with ‘liquid’ cancers such as leukemia, there is still a significant need to reduce the time and cost of producing these complex therapies,” said Dr. Michael C. Milone, M.D., Ph.D., an associate professor of Pathology and Laboratory Medicine at Penn. “Building on our research from 2018 that reduced the standard manufacturing approach to three days, and now to less than 24 hours, the manufacturing method reported in this study is a testament to the potential to innovate and improve the production of CAR T cell therapies for the benefit of more patients.”

Slowly researchers are understanding how cancer cells metastasize at a molecular level. Researchers at the University of Notre Dame discovered that cancer cells can transport DNA in small sacks called extracellular microvesicles. The DNA in these little sacs is related to metastasis. Cancer cells often are filled with cytosolic DNA, which is found in the fluid outside of the cell’s nucleus — which is where it is found in normal cells. The cytosolic DNA comes from various sources, but new research suggests that chromosomal instability comes from cytosolic DNA in tumor cells. In their research, they demonstrated how DNA from the Y chromosome, which is found in the cytosol because of chromosomal instability, is transported by extracellular vesicles and then transferred to a female mammary epithelial cell line. The Y-chromosomal DNA was a way to demonstrate the DNA was transferred since females do not have Y chromosomes. The research further showed that cytosolic DNA is transported to microvesicles alongside cGAS, an enzyme, which is believed to play a role in tumor progression.

Another Mechanism for how Cancer Cells Invade Tissue

In a separate study, researchers at the University of Copenhagen used “the best tweezers in the world” to study how cells explore and invade tissue. Using a microscope at the university’s Niels Bohr Institute, they studied how human immune cells use “octopus-like tentacles” called filopodia to encircle bacterium and then engulf them. The filopodia act as sensors that identify bacterium as prey. That wasn’t new information — but how the filopodia rotate and act mechanically, which allows a cell to move, was new and has potential repercussions for cancer research because cancer cells are also highly invasive. And the research team believes cancer cells are also dependent on how effective their filopodia behave. The mechanism they found, both twisting and contracting, appears to be found in all living cells. The “best tweezers in the world” are a type of optical tweezers that uses a laser beam with a wavelength calibrated to the object being studied in order to manipulate it.

Working with laboratory mice, researchers at UBC, Universite de Sherbrooke and Cornell University, tested a nasal spray that was effective in preventing COVID-19 infections with the Alpha, Beta, Gamma, Delta and Omicron variants. The compound, N-0385, blocks a particular human enzyme used by the SARS-CoV-2 virus to infect a host cell. In a small study in about 20 mice, the 10 receiving the spray survived the infection compared to only 20% of the untreated mice. The drug, when tested against the Delta variant, helped prevent COVID-19, and the mice who received it 12 hours after infection, appeared to have fewer infection-related problems.

Drug May Improve Memory in Down Syndrome, Alzheimer’s and Normal Aging

Researchers at the University of Colorado Anschutz Medical Campus, working with an FDA-approved drug called sargramostim, found that in a Phase II trial of Alzheimer’s patients it appeared to improve memory. The drug is a granulocyte-macrophage colony-stimulating factor (GM-CSF). GM-CSF is a normal human protein that is safe and well-tolerated and has been used to treat other diseases for more than 30 years. The researchers also studied the drug on behavior and brain pathology in a mouse model of Down syndrome and in mice undergoing typical aging. They published their research in the journal Neurobiology of Disease.

Sargramostim is a support medication for chemotherapy, used to stimulate the production, maturation and activation of three forms of white blood cells: neutrophils, macrophages and dendritic cells. The human version of the drug has already demonstrated it can improve cognition in people with mild-to-moderate Alzheimer’s disease and in cancer patients. The theory is that the drug may promote neuronal recovery from injury or neurological disease via multiple mechanisms, some of which improve cognition. Their next step is to evaluate if it is safe and effective in individuals with Down syndrome.