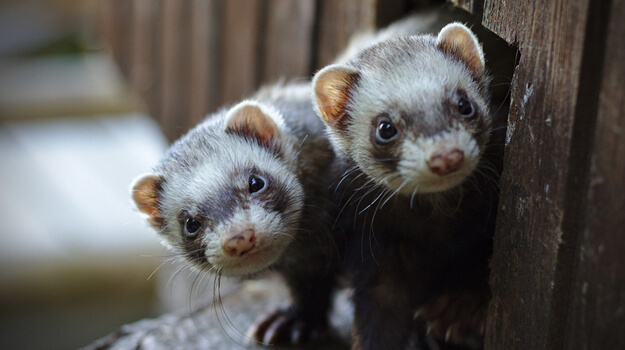 A multi-institutional research team has developed a nasal spray that effectively blocks absorption of the SARS-CoV-2 virus in ferrets with direct contact to infected animals, indicating the product could potentially protect against coronavirus disease 2019 (COVID-19) infection. While promising, the researchers say the nasal spray still needs to be tested in humans.

The intranasal spray consists of a lipopeptide, or a cholesterol particle that is linked to a chain of amino acids. This lipopeptide matches the stretch of amino acids in the spike protein of SARS-CoV-2 exactly. The pathogen uses the spike protein to attach to a human airway or lung cell, fusing into the cell wall and injecting its RNA. The lipopeptide in the spray intervenes in this process by attaching itself onto one of the spike’s amino acid chains, thereby preventing viral attachment.

In their study researchers performed daily intranasal administration of the fusion inhibitor lipopeptide spray to six ferrets divided into three cages. Two ferrets were also placed into the three different cages. One of the two extra ferrets received a placebo spray, and the other had been infected with SARS-CoV-2 deliberately a day or two days earlier.

The spray completely prevented direct-contact transmission of SARS-CoV-2 during a 24-hour co-housing period with infected animals. All of the untreated animals that had direct exposure to the virus had an infection at the end of the study.

The investigators of the small animal study suggest the intranasal lipopeptides are non-toxic and highly stable “and thus readily translate into a safe and effective intranasal prophylactic approach to reduce transmission of SARS-CoV-2.” The paper describing the study, which has been posted first to the preprint server bioRxiv, has been submitted to Science for peer review.

While this study was limited by its use of only animal models, the investigators said they chose ferrets because these animals can also catch viruses through the nose, similar to how humans do. The National Institutes of Health and the Columbia University Medical Center provided funding for the animal study as part of their ongoing efforts to find effective therapies to prevent and treat COVID-19.

Human trials will require additional funding. In a statement made to the New York Times by the study’s co-author Dr. Anne Moscona, pediatrician and microbiologist at Columbia, she and her team have applied for a patent on the spray. Dr. Moscona says she hopes her institution will seek funding from the federal government’s Operation Warp Speed or large pharmaceutical companies to obtain the needed funding.

According to the investigators, the lipoprotein used in this nasal spray is inexpensive to produce. The lipoprotein can be made as a freeze-dried white powder that does not require refrigeration. Doctors or pharmacists can mix the powder with either sugar or water to make the nasal spray.

In contrast, other therapies for COVID-19, like Regeneron’s monoclonal antibody therapy REGN-COV2, are more expensive to produce. These antibodies, while possibly effective in humans, also require refrigeration and usually must be administered via injection. Inhaled antibody therapies, like AR-711 from Aridis, may circumvent the limitation of having to inject the drug. However, significantly more work is needed to determine how effective these inhaled therapies are for preventing COVID-19 infection.