Hope in the Wake of Recent Failures in Huntington’s Disease 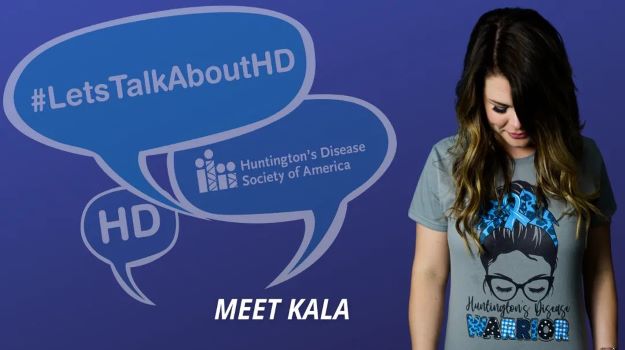 “Love your story and don’t be afraid to share it. You never know who may need to hear it.” - Kala Booth, Huntington’s Patient and Caregiver/Photo courtesy of Kala Booth.

It’s a rare, genetic disease that spares no survivors. Children born to parents with Huntington’s disease (HD), also called Huntington’s chorea, have a 50% chance of inheriting the brutal, ultimately fatal neurodegenerative illness. While treatments exist to manage the symptoms of the disease, nothing has proven to be curative – yet. Several biopharma companies are working hard to change that.

Huntington’s disease is caused by a CAG repeat in the first exon of the huntingtin (HTT) gene. This mutation causes brain cells to die, leading to a host of progressive cognitive, psychiatric and movement disorders. An involuntary jerking or writhing movement, also known as chorea, is a hallmark of the disease.

At a recent congressional hearing on neurodegenerative diseases, caregiver and patient, Kala Booth described Huntington’s as “having ALS, Parkinson’s and Alzheimer’s together.”

“We have more cluster symptoms than we do checking off boxes,” said Booth, who represents the fourth generation of her family known or suspected to suffer from the disease.

While scientists had studied the neuropathology of chorea as early as the late nineteenth century, it wasn’t until advances in genetic sequencing led to the discovery of the huntingtin gene in 1993 that doctors were able to give patients a definitive diagnosis.

Huntington’s disease is gender, race and ethnicity-agnostic. The average age of onset is in one’s 30s or 40s, and the disease takes its victims between 10 to 20 years after the onset of symptoms. In the U.S. alone, there are approximately 40,000 patients and 200,000 more at risk of inheriting Huntington’s.

There are currently two drugs approved in the U.S. specifically to treat Huntington’s disease. In 2008, the U.S. Food and Drug Administration (FDA) approved tetrabenazine to treat chorea. Nearly 10 years later in 2017, the regulator approved Teva Pharmaceuticals’ Austedo®, another treatment for chorea associated with Huntington’s. Notably, neither of these drugs is disease-modifying.

“This is not the issue that patients really cry about. They say, yes okay, the movements aren’t great, but what we want is something that can help us do our finances, stay at work, feed ourselves, keep our hobbies, hug our children and grandchildren. That's what they want and that's measured by functional capacity,” said Dr. Michael Hayden, a renowned Huntington’s researcher and chief executive officer of Prilenia Therapeutics.

Prilenia is developing Pridopidine, the only oral formulation currently in clinical development for Huntington’s. As the former chief scientific officer at Teva, Hayden led Austedo to its approval.

Today, scientists are trying to solve the disease at its genetic heart using a variety of approaches, including antisense oligonucleotides (ASOs), which are capable of altering mRNA expression. In neurologic diseases, the objective is to reduce levels of a mutant protein.

To look at recent headlines, one might easily become discouraged with the approach in Huntington’s disease.

In March, Roche discontinued dosing in the Phase III GENERATION HD1 study of tominersen, an ASO it had been developing with Ionis Pharmaceuticals. The failure hit the Huntington’s community hard, particularly after a phase I/II trial showed that tominersen significantly lowered levels of mutant huntingtin in the cerebrospinal fluid without serious side effects. But Roche stated that the therapy ultimately failed to show higher efficacy than placebo, and actually led to worse outcomes when given more frequently.

“In this trial, they were knocking down both wild-type and mutant huntingtin. We know that wild-type huntingtin is neuroprotective and the loss of it in humans may have made them particularly susceptible to the injurious and toxic effects of mutant huntingtin,” Hayden said.

“The other possibility is that the ASO used had caused inflammation. There were white cells in the CSF, and this was dose-related. The third thing is that it may not have reached at sufficient levels the deeper parts of the brain where there is earliest neuronal loss.”

Wave Chief Medical Officer, Dr. Michael Panzara suggested that based on the data, not enough drug reached the target to elicit a therapeutic effect.

Wave continues to develop WVE-003, which targets a different SNP with chemical modifications to increase the drug’s potency and ability to reach its targets. The company initiated a Phase Ib/II trial earlier this year.

One thing is for certain: there is no lack of patients eager to participate in the research, including Booth who was part of the Phase II SIGNAL trial of Vaccinex, Inc.’s pepinemab. Vaccinex is developing pepinemab, a humanized monoclonal antibody which blocks semaphorin 4D (SEMA4D), a key driver of neuroinflammation.

“I will sign up for all clinical trials that I qualify for. It gives me a purpose and it gives me hope for my family,” Booth said.

But it is also devastating when it fails. In September 2020, Vaccinex announced that despite showing some benefit, pepinemab had missed both primary endpoints. Booth was at work when she heard the news.

“The whole time I was in the trial, I never prepared for it to fail,” she said.  “All I heard was that it’s FDA fast-tracked and they're showing promising results. The Vaccinex stock dropped and that’s how I found out that it had failed.”

Fortunately, there are more studies ongoing. Prilenia’s phase III trial of Pridopidine, a highly selective sigma-1 receptor (S1R) agonist, is on track to complete enrollment ahead of its projected Q4 2021 target and expects data by the end of 2022 or early 2023.

“If successful, this would be tremendously hopeful because it's a safe, tolerable neuroprotective drug. Being safe and tolerable, it could even be taken early when patients do not have that much damage and hopefully can maintain neuronal structure and function and mitigate progression,” Hayden said.

The most significant challenges are target engagement throughout the brain and deciding whether to take a selective approach, aiming to reduce mutant HTT alone or non-selective, targeting both wildtype and mutant HTT.

“The oral drug will get you through some of the problems of getting target engagement, as long as that oral drug rapidly diffuses throughout the brain,” Hayden explained.

Chicago-based Exicure, Inc., which is in preclinical and clinical development with a class of synthetic nucleic acid sequencing assets that leverage the company’s proprietary Spherical Nucleic Acid, (SNA™) technology, believes its technology offers advantages over linear oligonucleotides in CNS diseases like Huntington’s.

“The SNA technology facilitates a different way of getting into cells than linear oligonucleotides. SNAs have dramatically improved cellular uptake. SNAs also have increased tissue persistence and very favorable CNS biodistribution into deep brain regions,” said Exicure Chief Medical Officer Douglas E. Feltner MD. “These are the sorts of things that cause us to believe that our technology will be more effective than linear oligonucleotides. That's what gives us hope and that’s what gives hope to the patients.”

Hayden pointed to uniQure’s adeno-associated virus-based gene therapy as being a potentially promising approach in the space.

“Certainly, the approach taken by uniQure and others to go deep within the brain may have some advantages,” he said. “The good thing with uniQure is that you get straight to where you're aiming to go, which is the basal ganglia, and you know you’ll get there. The downside is it necessitates surgery.”

In June, uniQure dosed the first two patients in what is the first-in-human clinical trial for an AAV-based gene therapy in Huntington’s disease.

While genetic testing is expensive, Wave President and CEO, Dr. Paul Bolno said that the lack of it is one of the biggest challenges researchers face.

“Today, the testing rate is in the low double digits, depending on geographic location,” he said. “Given all of the clinical and preclinical research occurring to address this devastating disease, increasing the rate of genetic testing for Huntington’s would provide the scientific and medical community with more opportunities to deliver care, and ultimately, develop effective therapies.”