What You Need to Know About Freenome 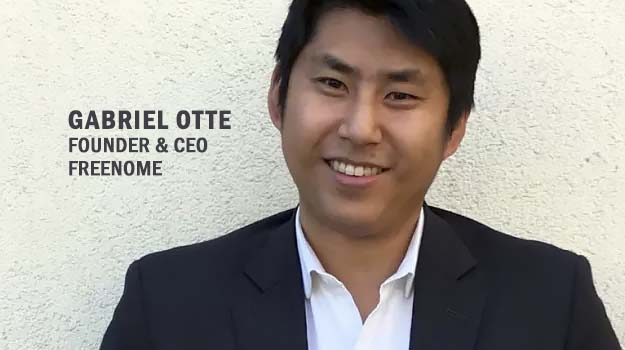 Freenome, headquartered in South San Francisco, is focused on developing a diagnostic test for early detection of cancer and other diseases on the so-called “liquid biopsy,” in other words, blood.

The company’s chief operating officer and co-founder, Riley Ennis, told BioSpace, “Freenome is an AI biotech company focused on creating tools that empower people to prevent, diagnose, and treat their diseases, such as cancer. Gabe Otte, Charlie Roberts and I founded Freenome in 2014, after seeing our friends and family struggle with diseases like cancer. Through a fusion of machine learning and genomics, our team is working to reinvent disease management through early detection and intervention, with the goal of making cancer screening and diagnostics as accurate and accessible as possible.”

“Other groups tend to focus on signatures coming from the tumor, yet the systemic response due to the presence of disease can be amplified in many different cell types found within the tumor microenvironment,” Ennis says. “Thus, we are also working with several pharma companies to explore how these signatures can discover new drugs and predict response to treatment to help people find the right interventions.”

Gabriel Otte – co-founder and chief executive officer. Prior to founding Freenome and acting as its chief technology officer, Otte was an engineer with Glyde. Before that, he was a research assistant at Cornell University and a software engineer for Apple.

Girish Putcha – chief medical officer. Prior to joining Freenome, Putcha was with Medicare Evidence Development & Coverage Advisory Committee (MEDCAC), Coverage and Analysis Group, with the Centers for Medicare & Medicaid Services. Before that, he was director of Laboratory Science for Palmetto GBA and founding Medical Director of Orion Genomics.

Because it is essentially an informatics company, Freenome doesn’t have a “pipeline” in the usual sense of a biotech company having a compound it is developing. Ennis told BioSpace, “We are currently focused on developing screening tests for several types of cancer, including breast, prostate, colon, and lung and are looking at the ability of our technology to pick up signals that differentiate between these cancers, as well as compare them to standard screening methods, such as mammography and prostate-specific antigen testing. We plan to look at other forms of cancers and diseases in the future.”

There are a number of well-backed companies, such as Grail Bio and Guardant Health that are working on so-called liquid biopsy screening technology for cancers. There are smaller companies as well, such as Datavant, which recently launched to assist with clinical trials, and Apostle which is taking a nanotechnology/bioinformatics approach to developing a cancer blood-screening test.

“People tend to compare us to liquid biopsy companies like Grail and Guardant Health. However, we have a different approach that goes beyond traditional liquid biopsy techniques. The industry as a whole is realizing that when it comes to the early detection of cancer, conducting sequencing on cell-free DNA from tumors has its limits. Less than 0.1 percent of cfDNA in the plasma comes from tumors, whereas 60 to 80 percent of cfDNA comes from immune cells, fibroblasts, and other types of non-cancer cells. By analyzing cfDNA and other analytes from these cells, we can detect cancer earlier, more accurately, and more cost-effectively than analyzing cfDNA from tumors themselves,” Ennis told BioSpace.

Freenome presently has more than 25 research partners around the world, including Moores Cancer Center at UC San Diego Health, University of California San Francisco and Massachusetts General Hospital. They collect and process blood samples, which the company uses to design and validate its tests. It also has partnerships with seven pharmaceutical companies to determine if the technology can be applied to other oncology areas, such as pre-treatment drug response prediction.

What to Look for

There’s no doubt Freenome is ambitious, and their backers, such as Google, are notable. In the next three to five years, the company hopes to have launched an early cancer screening test accessible by millions of Americans.

“We have a big vision at Freenome—to have a world without disease. It’s deeply personal for Gabe and me, and we know we can’t do it alone. We’re building a team of employees who share our vision as well as the company’s core values, which are empathy, trust and integrity,” Ennis says.