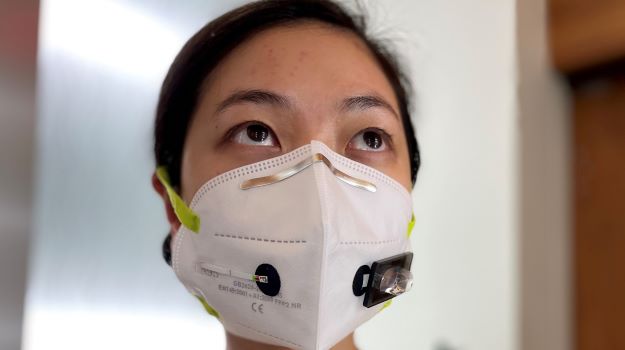 The wFDCF face mask can be integrated into any standard face mask. (Wyss Institute at Harvard University)

A facemask with sensors to detect SARS-CoV-2 is about to be commercialized by researchers at Massachusetts Institute of Technology (MIT) and Harvard University. The prototype offers PCR-like precision without a power source, and is stable at room temperature for many months.

“This test is as sensitive as the gold standard, highly sensitive PCR tests, but it’s as fast as the antigen tests that are used for quick analysis of Covid-19,” lead author Peter Nguyen, a research scientist at Harvard University’s Wyss Institute for Biologically Inspired Engineering, said in a statement.

As such, it offers an accurate, fast, low-cost diagnostic assay for front-line workers that can be read easily without instruments.

“Currently, the face mask is still an academic prototype,” Nguyen told BioSpace. “Additional work is required to develop a scalable assembly process, expand the operational robustness, and increase the sensitivity. This optimized production-ready face mask will also enable us to conduct trials for any regulatory approval.”

The mask uses small, disposable, freeze-dried cell-free sensors embedded inside masks to detect the presence of SARS-CoV-2 virus (or, with some adaptation, other pathogen such as Zika, Ebola or environmental toxins) from the exhalations of its wearer. To get results, the wearer needs to press a button on the mask to release water to rehydrate the freeze-dried sensors, and then wait 90 minutes for results. Results are displayed on the inside of the mask, for user privacy. The research recently appeared in Nature Biotechnology.

Wearable freeze-dried cell-free (wFDCF) technology is the basis of the sensor’s mechanism of action. The cells’ molecular machinery to read DNA and produce RNA and proteins is extracted and freeze-dried, enabling them to be stable at room temperature for long periods of time. They are activated by adding water. To turn them into detection devices, Nguyen, James Collins, MIT professor of medical engineering and science, and colleagues added synthetic genetic circuits that create signals – fluorescence, luminescence or a color change – when target molecules are detected. Results can be sent to a cell phone for real-time data analysis and monitoring.

Then they took things a step further by adding a series of microfluidic chambers to extract, amplify and detect specific viral DNA using CRISPR-based technology. A schematic of the mask shows an activation button on the outside of the mask. When pressed, it releases a small reservoir of water onto the collection site on the mask. That collection site is ringed by silicone elastomer to prevent the moisture from spreading and evaporating.

For COVID-19 diagnosis in masks, output is a color-change strip embedded into the region that can be read without instrumentation. For positive results, one strip darkens. For negative results, a second strip nearer the device also darkens. In terms of accuracy, the results are similar to those of standard PRC tests.

For other versions of this wearable assay, fluorescent or luminescent signals may be used. They may be used for other assays and can be read with a handheld spectrometer, although Collins also has designed a wearable spectrometer that could be integrated into the fabric and transmit results wirelessly to a smartphone or other mobile device.

The detection technology evolved from a diagnostic tool the researchers had developed for the Zika virus in 2015. That assay was an inexpensive, paper-based diagnostic that detected RNA molecules from pathogens by coupling them to an indicator protein that changed color of fluoresced in its presence. The two were then embedded into paper.

When the COVID-19 pandemic emerged, the researchers began to consider making the technology wearable.

The work is particularly notable because, unlike other biosensors, this version doesn’t require living cells and thus reduces the risk that engineered cells could be released into the environment.

“This technology could be incorporated into lab coats for scientists working with hazardous materials or pathogens, scrubs for doctors and nurses or the uniforms of first responders and military personnel who could be exposed to dangerous pathogens or toxins, such as nerve gas,” said co-author Nina Donghia, a staff scientist at the Wyss Institute, speaking with the Harvard Gazette.

The team tested more than 100 fabrics, ultimately identifying a blend of polyester and other synthetics as optimal.

The development team has filed for a patent on the technology is looking forward to commercialization. As Nguyen told BioSpace, “We are in the process of seeking partners and funding to help us hit the milestones we need to fully produce the COVID-19 sensing face masks as a commercial product.”

The hope is to identify manufacturing partners to begin mass production of diagnostic face masks for the COVID-19 pandemic, as well as, eventually, other wearables to detect other biological or chemical threats.

Financial supporters include Johnson & Johnson, through the J&J Lab Coat of the Future QuickFire Challenge award, the Defense Threat Reduction Agency and others.