Daiichi Sankyo is on a mission – to become a global top 10 leader in oncology by 2030. Based on the motto, “passion for innovation and compassion for patients,” and the say-so of SVP and Global Head of Oncology Development Gilles Gallant, here’s why BioSpace believes the ambitious target is possible.

The mid-sized Japan and New Jersey-based company’s pipeline is made up of two sections: antibody-drug conjugates (ADCs) and Alpha, which comprises the remainder of the clinical development assets. With an ADC currently on the global market for the treatment of HER2-positive breast and gastric cancers, and several more currently in development, they are the company’s sweet spot.

Leveraging expertise in both protein engineering and medicinal chemistry, Daiichi Sankyo’s team of researchers in Japan developed its proprietary DXd ADC technology in order to help optimize the potential of ADCs as precision cancer treatments. Specifically, they are designed to help overcome several limitations associated with two critical ADC components – the linker and payload.

The payload is DXd, a topoisomerase I inhibitor. It features a bystander antitumor effect, meaning that its high cell membrane permeability may allow payload molecules to act on neighboring dividing tumor cells and surrounding cells that might not express the target receptor on heterogeneous tumors. 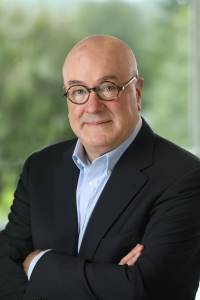 “Our scientists in Japan are working on additional ADCs in order to continuously improve our current ADC technology to improve outcomes of patients with cancer,” Gallant said.

On the Alpha side of the pipeline, Daiichi Sankyo has several programs spanning oncology, specialty medicines and vaccines. These are in being investigated in acute lymphocytic leukemia, acute myeloid leukemia (AML), castration-resistant prostate cancer, atrial fibrillation and Duchenne muscular dystrophy. Gallant specifically highlighted an EZH1/2 inhibitor in development for B-cell and T-cell lymphomas and a FLT3 inhibitor, which is being studied in AML.

One of Daiichi Sankyo’s strengths, certainly, is its multiple platforms, which include small molecules and biologics, mechanisms it can leverage against a diverse array of targets.

“Depending on the target we have, we can actually produce a small molecule, a biologic or an antibody-drug conjugate. We can use whatever technology we think is the best to address the disease,” Gallant said. “That's the beauty of our research.”

With all of this innovation coming down the pike, Gallant shared that Daiichi Sankyo is currently in growth mode, particularly when it comes to oncology.

“We have many innovations that we're bringing to the clinic, so consequently, we have to attract many, many people to our company in order to get those drugs to patients as quickly as possible,” he said. “There are a lot of opportunities to work with drugs that are exciting.”

Borne of the merger between two companies, Sankyo, Co., Ltd. and Daiichi Pharmaceutical Co. Ltd., each established more than 100 years ago in Japan, Gallant said Daiichi Sankyo’s core roots – kindness and compassion – are representative of these origins.

“We really have a sincere desire to help patients,” he said. “Many companies say the patient is at the center of everything they do. Here, I think it is constantly in our minds. Our goal in R&D is to bring those innovations to really help patients with unmet medical need, and to do this as quickly as possible.”

Collaboration, Gallant said, is another Japanese trait that can be found within the company.

“We are a Japanese company, so that’s a little bit different. It means very much a collaborative environment, and this is fundamental to everything we do. We work in teams; we work around the table and everybody's equal; Everybody respects each other. Which doesn't mean we don't sometimes ‘discuss’,” he chuckled. “But it's a very respectful, collaborative environment.”

On March 16, BioSpace is partnering with Daiichi Sankyo to hold a virtual R&D Career Event. In this vein, Gallant shared that prospective applicants will have an opportunity to develop innovative, scientifically-based drugs that have a real chance to help patients.

“It is important because you want to make a difference. You want to make an impact on a disease that, honestly, affects everybody.” This is what drew Gallant to the company in 2017. “Working in a company that has such a pipeline is really what I was looking for; to be associated with a company that has high integrity and high compassion with exciting drugs. Daiichi Sankyo is really bringing all of this together.”

In return, Gallant is looking for a specific type of applicant – one who will embrace such a culture.

“I personally take the time in interviews to really figure out if the person is going to be a fit, because the culture is somewhat different from where I've worked in the past, in companies based in Europe, in the U.S. It's a very different mindset.”

Also important to note, Gallant said, is Daiichi Sankyo’s position as a mid-sized pharmaceutical company. “We're not small; we're not enormous. You have all the departments, all the possibilities that Big Pharma has on a smaller scale.” What this also means, he added, is that “you're going to be visible in this company. We're looking for people who want to be visible, want to make a change, want to make an impact, and are ready to do that in a respectful manner.”

With origins in Japan and team members in more than 30 countries around the world, it is not surprising that Daiichi Sankyo has a unique perspective on diversity and inclusion.

“Diversity is in our DNA,” Gallant said. “In the U.S., we have many colleagues of different ethnic origin. My group is really international, which is fun. This is important because people come from different backgrounds and can bring so much more to the table. When you come from a different point-of-view, you can bring so much.”