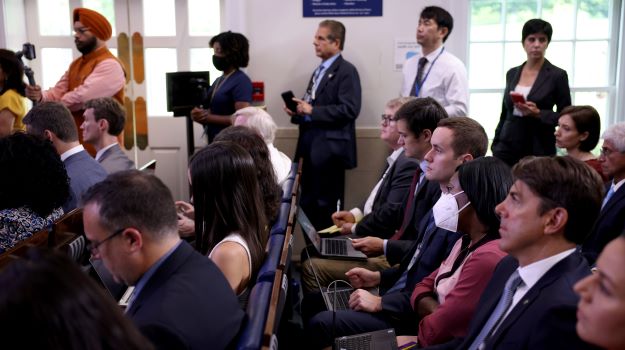 Stop the presses! Science is important. Antibodies and T cells matter, and severe respiratory disease, contracted from a bat, can turn the entire world upside down.

The COVID-19 pandemic has changed science journalism. It has changed journalism, full stop. So much so that in early June, the Associated Press released an updated style guide with much-needed rules for writing about the ongoing crisis: COVID-19, not Covid-19. Death and die, not passed away or passed on.

Semantics aside, though, science and health care have taken a new position in the hierarchy of readers’ top news priorities.

While science journalists have had to wage war against the fake news and misinformation generated by the mainstream media—and the rapidly evolving facts of COVID-19 itself—the pandemic appears to have generated more interest in science more generally.

“There has been at least a tenfold increase in the number of journalists interested in science, and this has led to an increasing emphasis by the media on science-related and science-based stories,” said Dr. Rodrigo Medellin, a researcher at the Institute of Ecology at the National Autonomous University of Mexico.

Dedicated science news sources and mainstream media have also benefited from a substantial increase of data and analysis to write about.

“It is not just the speed and focus with which the scientific community responded, nor simply the use of new technologies to draw out new discoveries, but rather the singular willingness of scientists, all over the world, to share new ideas and data immediately and transparently, in some cases well before the idea or the research is fully formed,” said William A. Haseltine, a former Harvard Medical School professor and founder of the university’s cancer and HIV/AIDS research departments.

Haseltine added that the pandemic has created an entirely new research environment that is “now structured for collaboration and communication above all else.”

And experts are not only publishing. They have come out of the woodwork to communicate their findings and ideas directly to science journalists.

But it is not all silver linings for the journalism industry. In Business Wire’s 2020 Media Survey, 37% of respondents reported a surge in news consumption or online traffic. Another 56%, however, reported a decrease or loss of revenue. Others experienced great distraction, general disruption and difficulty reaching people.

In its very definition as a “global” pandemic, COVID-19 has had a paradoxical impact on geographical borders. In one way, it has broken them down, opening a window into different regions and how each is handling the pandemic. In the virus’s trajectory from Asia, North Americans quickly came to rely on news sources such as the BBC in the United Kingdom to inform them of what was coming next as variants of concern traveled in this direction. Studies being reported in Israel, which is among the world’s leaders in COVID-19 vaccination and enjoyed a rapid vaccine rollout, have become particularly important in projecting the future success of vaccination efforts.

The pandemic has also opened a whole new aperture into world events—reporting being done by those in the trenches. When entire workforces were forced online, a funny thing happened: geographical barriers disappeared and editors were given the liberty to hire reporters from anywhere in the world. For news publications, this meant access to a new talent pool with eyes and ears on the ground in India, South America and the U.K.

Conversely, misinformation, or speculation, regarding the virus’s origins and how it was allowed to spread across the world have led to national individualism and race-based attacks. While social media perpetuates through inflammatory tweets and other communication, even the question of a lab leak being considered in reputable scientific sources such as Nature could inadvertently help to perpetuate xenophobia against, particularly, Asian Americans.

The pandemic has heightened political polarization, clearly evidenced from the 2020 U.S. election and subsequent mask wars. It is even more alarming in countries such as Bangladesh, India, Turkey and Malaysia where journalists have been detained for COVID-19 coverage by governments that saw an opportunity to silence critics.

For local newspaper offices, the pandemic and its implications have been severe. Sandy Mui, an award-winning journalist and digital communications coordinator at PEN America notes that the devastating effects of COVID-19 on the economy have been acutely felt in newsrooms across America.

“With advertising revenue plummeting as a result of the pandemic’s impact on businesses, newsrooms have been forced to make cost-cutting measures including furloughs, layoffs, pay cuts, reduced hours, etc. Inevitably, the lives and livelihoods of those who power the newsrooms — the journalists themselves — are impacted,” Mui said.

COVID-19 has also challenged traditional journalistic ethics. During the early days of the pandemic, CNN had a longstanding policy forbidding prime time anchor Chris Cuomo from interviewing his older brother, the former New York governor, Andrew Cuomo. The network temporarily lifted the ban in March and April 2020 to allow interviews between the two when the elder Cuomo’s role in the pandemic became too difficult to ignore. Chris Cuomo’s ratings doubled as a result, and the AP noted that “it gives viewers sitting at home a glimpse at the dynamics of a family other than their own.”

Even at the time, Chris Cuomo acknowledged the conflict of interest, and CNN eventually heeded the criticism and reinstated the ban.

It remains to be seen whether the changes illustrated here will have long-lasting implications. When it comes to the positive ones, let’s give the final word to Medellin, who stated, “The only thing I hope is that this is not a ‘backpack fire’ as we say in Mexico: a gigantic flame that lasts a very short time and goes out soon.”