Biopharma Execs Address the Challenges of a Post-Pandemic Workplace 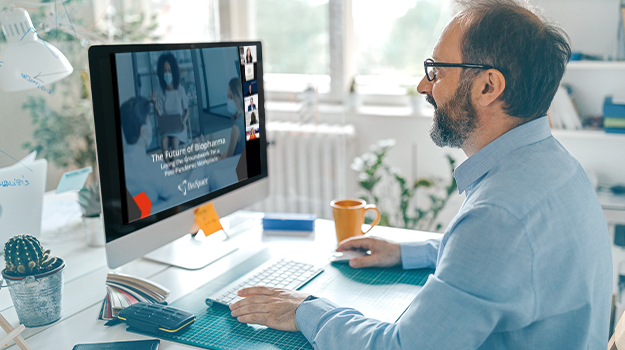 First of all, biopharma employees will not be ‘returning to work’. If their physical location changes at all, they will be returning to ‘the office’ or to ‘onsite.’ Because this is one industry that has never worked harder than it has during the past 15 months – under incredible duress.

“What has the pandemic done to our workforce? It’s dramatic. It’s unprecedented,” said Raj Kannan, chief executive officer of Chiasma, Inc., at BioSpace’s The Future of BioPharma: Laying the Groundwork for a Post-Pandemic Workplace panel.

Whichever worthy hyperbolic you use to describe it, the biotech industry may be looking at a different post-pandemic workplace situation than its closest neighbor, the tech industry.

“One of the challenges is that we’re really creating a bit of disparity between industries now relative to norms and practices. I think there is more comfort with vaccines in general within our industry, and I think there’s a higher level of expectation to return to work onsite because you can’t manufacture medicines in a GMP environment from your home,” said Linda Fitzpatrick, chief people and communications officer at Sutro Biopharma, a clinical stage company of approximately 210 people.

Sutro, which plans to bring 80-85% of its staff back to the physical workplace, is already there from both a manufacturing and R&D standpoint.

“I do believe we’ll have a bit more openness to what I’m going to call a modified hybrid model. We want to be able to provide that level of flexibility for our team while acknowledging that we’re such a collaboration-based organization, and we really, truly are best when we’re working together,” Fitzpatrick said.

Peter Mariani, EVP and chief financial officer at Axogen Inc., a company of just under 400 focused on peripheral nerve regeneration and repair, echoed this philosophy.

“We’re a high-growth company. We’ve got a high growth culture, and we think it’s going to be very challenging to maintain that culture and maintain the success that we’ve generated if we just say, 'yeah, it’s okay to be at home.'  It’s hard to nurture, manage, and deliver a culture via Zoom of Teams, " he said. "You need to be together."

This reluctance to pivot to a work from home model may make it more challenging for biopharma companies to compete for top talent.

According to BioSpace’s COVID in the Biopharma Workplace report, over the past year, 49% of biopharma employees worked from home, and exactly half of respondents would prefer to keep it that way. Forty percent consider working remotely to be very or extremely important, and 15% will consider a new job only if they can do so permanently.

Those people might want to apply for a job at CalciMedica Inc., a biotech developing inhibitors of CRAC channels for the treatment of inflammatory diseases, or other small companies.

“The smaller biotech companies, a lot of them are virtual to start with. We’ve been doing this sort of virtual thing for a while. A lot of the business functions can be done at home or offsite with people coming in once or twice a week,” said CalciMedica Chief Executive Officer, Rachel Leheny.

But there is still that other 60% to consider.

“There have been several candidates that we’ve talked to who have said, ‘I’m coming to you because I love what you’re doing, but you’re also trying to bring people back into the office. The job I was doing, they were telling us we could be home for the next six months, and I’m done. I want to go back to work,’” Mariani said.

If these companies are any indication, it appears that the biopharma industry will be a hybrid of virtual and physical workforces. With this comes a whole new set of risks.

When it comes to building and managing a successful hybrid team, Tkach told BioSpace that it is critical to avoid factions from forming.

Kannan believes that our social skills and culture have adapted to the new virtual reality.

“If somebody had told me that we would go through a merger without ever meeting the CEO of the other company in person, I would have said, ‘there is no way I’m selling my company without actually meeting the person.’ I would have never imagined this two years ago,” Kannan said.

Perhaps not surprisingly, this is one industry that is doing exceptionally well in terms of getting its people vaccinated against COVID-19.

“We’re a science based company. I think we all understand this industry, we understand the regulatory process of getting drugs and vaccines approved and the rigor that’s involved," Fitzpatrick said. "I do think that lends to more confidence. Right now, on the basis of our surveys, we have about 93% of the team fully vaccinated."

Still, not everybody is on board.

“We do have a handful of people who, for a variety of reasons, are not comfortable getting vaccinated, and we are going to honor those wishes and continue to encourage,” she added.

While it can be difficult to see the rainbow following a pandemic that has claimed the lives of more than 3 million global citizens, the necessary shutdowns have revealed opportunities.

For the first time, Sutro hired two regulatory executives with the understanding that the roles would be primarily remote. Would this have been a possibility prior to the pandemic?

“It’s been a little bit of a launch and learn, but I think we did have an openness that probably, if we’re perfectly honest with ourselves, wouldn’t have happened the same way,” Fitzpatrick said.

The pandemic has also provided the industry with an awakened vertical, and the opportunity to better manage future crises.

“One of the things that this has underscored is the fact that there has been very little spending in acute care for a very long time. Hospital-based drugs were considered kind of unattractive because you don’t have the pricing pad that you do with an oncology drug or an orphan drug,” Leheny said. “This kind of showed people that we’ve really been remiss in bringing all of these beautiful technologies to bear on acute care. I think it is a silver lining, and I think we’ll be way better equipped for the next one.”

The circumstances have also uncovered glaring inefficiencies, including the particularly troublesome “broken telephone.”

“When you have a lot of people, they’re not repeating themselves because you get everybody in the group at once,” Leheny said. “Everyone keeps talking about going back to whatever. This is like Amazon; you’re not going to go back to not using Zoom.”