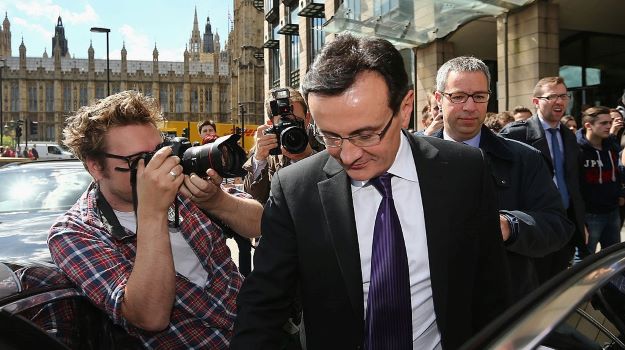 AstraZeneca Chief Executive Officer Pascal Soriot is seeing a significant return on the fruits of his company’s labor in 2020. Soriot’s annual compensation jumped a bit from the previous year to $21.4 million.

Since his time at the helm of the company, Soriot has overseen significant growth in the company’s pipeline of products, which has primarily been focused on oncology, cardiovascular, renal and metabolism and respiratory diseases. The pipeline focus expanded at the end of 2020 with the $39 billion acquisition of rare disease-focused Alexion Pharmaceuticals.

All of that though has been overshadowed by the company’s development and authorization of a COVID-19 vaccine it created alongside Oxford University, that is now being used across the globe.

For his guidance, he was awarded an annual bonus of $3.19 million, as well as payouts of $15.4 million under a long-term incentive plan, the Financial Times of London reported this morning. Soriot’s base pay is $1.79 million. That pay is set to increase by 3% in 2021 to $1.84 million, an increase that is being provided to all company employees, the Financial Times said.

Soriot is one of the highest-paid executives in the pharmaceutical industry, although that is something he has sought to dispute in the past. The Financial Times noted his total annual compensation is “equivalent to 197 times that of the Cambridge-based company’s median pay.” In addition to his 3% boost this year, Soriot’s total compensation is expected to receive a boost from an increase in his performance share plan from 550% to 650% of his total salary.

His pension contributions will actually be reduced to 11% of base pay, which is the same level as company employees, the Financial Times said. In its year-end announcement, AstraZeneca said the changes to Soriot’s total compensation are partly in recognition of his “criticality to future business success and increased scope of roles” from the development of the COVID-19 vaccine. Additionally, AstraZeneca said the changes are an attempt to “close the gap to market pay levels within the competitive global and European pharmaceutical talent pool,” The Financial Times said.

“In the last year, it became apparent that the current remuneration policy did not provide the committee with sufficient flexibility to appropriately reward the exceptional performance and growth we expect the executive team to deliver,” AstraZeneca said in its annual report, according to the Financial Times.

Soriot was certainly lauded for his company’s decision to not profit from the COVID-19 vaccine, which has been authorized in the United Kingdom and parts of Europe. On Monday, the World Health Organization issued emergency use authorization to its vaccine, which is being manufactured by India’s Serum Institute and AstraZeneca-SKBio in South Korea. The authorization means the AstraZeneca vaccine will now be available to all participating members of the WHO’s Covax program. AstraZeneca and Oxford University also announced they will assess its vaccine in pediatric patients ages six to 16. Approximately 300 volunteers are expected to participate.

The vaccine has yet to gain traction in the United States due to efficacy concerns. A recent study recommended the delay of the second dose of the vaccine. Following the first shot, the vaccine was found to demonstrate a 76% efficacy. If the second shot was delayed to 12 weeks or longer, the efficacy climbed to 82%. However, if the second dose was administered less than six weeks after the initial dose, the efficacy was 54.9%. A Phase III study in the United States is ongoing and a readout is expected within the next few weeks.