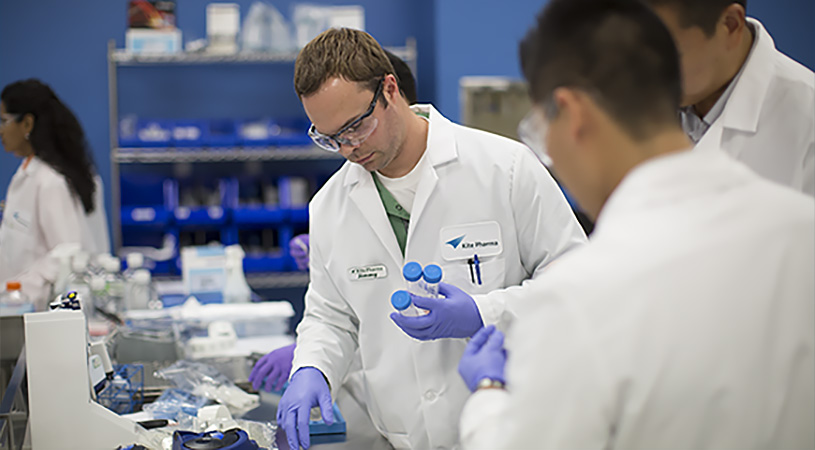 Santa Monica, Calif. – Kite Pharma announced yesterday promising results from its Phase I ZUMA-3 and ZUMA-4 clinical trials of KTE-C19 in adult and pediatric relapsed/refractory acute lymphoblastic leukemia (r/r ALL). Nine out of 11, or 82 percent of patients, achieved complete remission or complete remission with incomplete or partial hematological recovery.

KTE-C19 involves engineering a patient’s own T-cells to express a chimeric antigen receptor (CAR) to target the CD19 antigen, which is found on the cell surface of B-cell lymphoma and leukemias. This redirects the T-cells to attack cancer cells.

In the trials, 13 patients were treated with the therapy. Eleven had hit a point where they could be evaluated, and two had not yet reached that point.

“We are encouraged by the KTE-C19 safety and efficacy profile in ALL that is suggested by these data,” said David Chang, Kite’s executive vice president, Research and Development, and chief medical officer, in a statement. “In the Phase I portion of these studies, we are enrolling patients with high disease burden to rigorously evaluate safety and efficacy of KTE-C19. We look forward to initiating the Phase II portions of these studies in 2017.”

The company also indicated that it had begun the rolling submission of its Biologics License Application (BLA) to the FDA for KTE-C19 in patients with relapsed/refractory aggressive B-cell non-Hodgkin lymphoma (NHL) who are not eligible for autologous stem cell transplant. It is projected to be completed by the end of the first quarter in 2017.

The KTE-C19 product will be named axicabtagene ciloleucel. If the therapeutic is approved, it will be the first CAR-T therapy to be available commercially in the U.S.

“I am both proud and appreciative of the Kite team and our clinical investigators, who have helped to make this key milestone possible,” said Arie Belldegrun, chairman, president and chief executive officer of Kite, in a statement. “This is an important first step toward Kite’s biggest goal—bringing to market a potentially life-saving treatment for patients suffering from aggressive NHL.”

In his report, McCarty noted that, “The BLA submission is a milestone not just for Kite but for the entire CAR-T space, in our view. Novartis also announced that it plans to file a BLA for CTL019 for adult and pediatric r/r ALL in early 2017 following impressive data (82 percent CR) presented at ASH.”