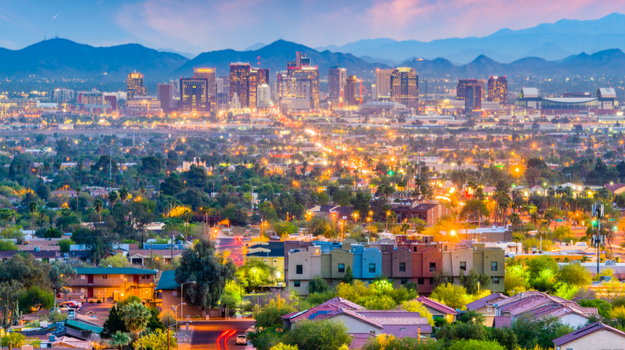 Arizona is not exactly the first place one thinks of when it comes to the life sciences. But, like many states and municipalities, Arizona and Phoenix, Arizona, are working hard to grow the life science industry.

Christine Mackay, director of Phoenix community and economic development at the City of Phoenix, told GlobeSt.com, “For Phoenix, growth in the bioscience and healthcare industry means stable, quality jobs with defined career progressions for our residents and the many new people moving to the market.”

She went on to say, “Our home, Maricopa County, saw the greatest population increase numbers in 2016 and 2017. These new residents are able to find opportunity in this rapidly growing sector. Jobs have been growing 14 percent faster than the U.S. overall in bioscience and healthcare.”

According to AZBio, bioscience companies in Arizona employed 25,686 people in 2016 in 1,310 individual businesses. Since 2015, the life science industry employment in the state has grown by 9 percent, twice that of the country.

Three of the companies were in the Phoenix area and three were in Tucson. They include AdviNow Medical (Scottsdale); CATS Tonometer (Tucson); Desert Valley Tech (Mesa); Emagine Solutions Technology (Tucson); NANOPEC (Tucson); and Ordinatrix (Phoenix).

Each company received a $30,000 grant and a professional-developed business plan. The award is administered by the Arizona BioIndustry Association.

On January 16, the Mayo Clinic-ASU MedTech Accelerator, a collaboration between Mayo Clinic (which has a major campus in Scottsdale, a suburb of Phoenix) and Arizona State University, announced it was accepting applications.

“We can help the participants to enhance the clinical and commercial interest, and viability of their health care solution,” stated Steven Lester, chief medical officer of the accelerator and a Mayo Clinic cardiologist. “Our hope is that the businesses both gain knowledge to best forge their path forward as well as use the brand of the program to mitigate the risk when seeking investors. Above all, we want to truly translate idealism into action and help to invent the health care of tomorrow.”

Companies taking part in the accelerator will be part of an accelerator immersion April 22 through May 3 at Mayo Clinic’s Scottsdale campus. Each cohort’s program will last six months, with incentives to participants offered to encourage them to stay and work in Arizona.

“Beyond our great weather and low cost of living, we have access to top-tier research faculty, world-class physicians and a pipeline of talent coming out of our academic programs,” stated Rick Hall, director of health innovation at ASU’s College of Nursing and Health Innovation, and the accelerator’s co-managing partner. “The Mayo-ASU alliance uniquely positions Arizona as an attractive location for companies to accelerate growth.”

And on February 11, Arizona State University broke ground on a $77 million research center to be built on the Phoenix Biomedical Campus in downtown Phoenix. Baltimore-based Wexford Science & Technology, a real estate company that develops research and medical centers around the country, is building the project, which is being financed by Ventas, a Chicago-based real estate investment trust.

The Wexford Science and Technology building will be 200,000 square feet and is designed to grow private sector investment in bioscience and health technology in Phoenix.

“By expanding the availability of lab space and other resources that support academic and commercial research and development in the biomedical fields, this project, anchored by Arizona State University, creates more places for life-saving products and services to be developed,” stated Joan Koerber-Walker, president and chief executive officer of the Arizona BioIndustry Association. “It will be a welcome addition to the ecosystem that supports our bioscience community’s innovative work to improve health that is happening at the Phoenix Biomedical Campus and across the state.”

Mackay stated, “On the Phoenix Biomedical Campus in Downtown Phoenix, the 30 acres and more than 9,000 jobs serve as strong anchor institutions. This is creating a dynamic workforce cluster in other employment corridors in the city. Phoenix has seen the most investment and interest in its urban core with education, research institutions and hospitals. Additionally, Mayo Clinic is doubling its size and partnering with Arizona State University for the future Health Solutions Campus. This major investment has piqued interest in the Desert Ridge area in north Phoenix.”

Like many states, Arizona has a strategic plan for developing the life sciences industry in the state. It was originally commissioned in 2002 by the Flinn Foundation and updated in 2014, with a goal of the state becoming globally competitive and a national leader in specific bioscience areas by 2025. This ambition goal is based on 17 strategies, 77 potential actions, and five “transformative measures.”

The goals include: forming an entrepreneurial hub; turning research into practice; developing talent in the life sciences; promoting Arizona’s mix of research, healthcare, and commercialization to economic partners in neighboring states, Canada, and Mexica; and enhancing the state’s “collaborative gene” reputation.

The state had also made some initiatives to promote life sciences. For example, the state government authorized $1 billion for university research infrastructure and also approved $10 million for an Angel Investment Tax Credit program, which allows angel investors to claim up to a 35 percent tax credit for investing in an early-stage Arizona biotech startup.

And those are just two examples.

Another major factor is the Technology and Research Initiative Fund (TRIF), which increased the state’s sales tax to promote university R&D and technology transfer.

Examples of TRIF’s impact include UA leveraging TRIF funding to draw $100 million from the National Science Foundation (NSF) for the CyVerse life-science cyber-infrastructure, workforce-prep funds for STEM teachers that amounted to $3 million in federal grants, and ASU’s formation of the Biodesign Institute.

ASU’s Biodesign Institute is 554,000 square-feet of buildings, Arizona’s largest research infrastructure investment in the biosciences. It has established more than a dozen different research centers, labs and 200 active research projects. It has 132 tenured research faculty and has attracted more than $400 million in external funding since 2003.