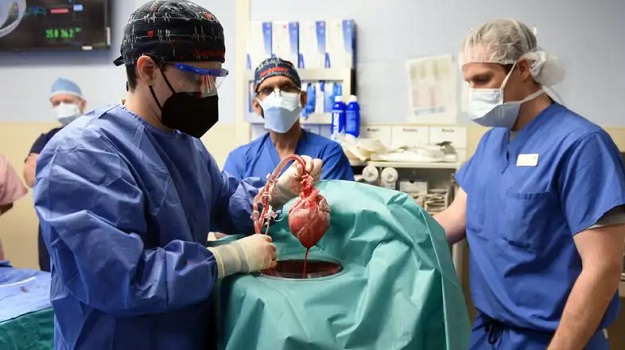 Courtesy of University of Maryland School of Medicine/EPA/Shutterstock

The genetically-modified heart of a man who died two months after his heart was replaced with that of a pig had nearly doubled in size, autopsy results show. But, there is still no full understanding of why the genetically-altered porcine heart failed.

A New England Journal of Medicine article details the events that led up to the death of David Bennett, whose own heart had been failing for some time and was dependent on venoarterial extracorporeal membrane oxygenation (ECMO) to live. In January, Bennett received a genetically-altered porcine heart developed by Revivicor, a company owned by Maryland-based United Therapeutics.

The pig heart had undergone genetic modifications, with 10 genes modified in order to make it a candidate for potential heart transplant. Bennett had been desperately ill and was out of options. Under the “compassionate care” standards of the U.S. Food and Drug Administration, he was allowed to have his heart replaced with a pig’s heart.

For two months, the transplanted heart functioned well. Bennett received immunosuppressants to prevent his body from rejecting the new organ. During that period, he spent time with his family and participated in physical therapy to help regain strength. However, about two months after the procedure, he took a turn for the worse. Forty-nine days after Bennett received the heart, there was a sudden diastolic thickening and the heart began to fail. Eleven days later, Bennet was removed from life support and died.

According to the report, the autopsy revealed the heart was edematous, meaning it was swollen with fluid. The organ had nearly doubled in weight, the report said. A histologic examination revealed scattered myocyte necrosis, interstitial edema and red-cell extravasation. But, there was no evidence of microvascular thrombosis. The findings were not consistent with typical rejection of an implanted organ, the report said.

"The pronounced sudden diastolic failure and global pathologic myocardial thickening without systolic dysfunction remains unexplained. These findings, in combination with focal capillary injury in the virtual absence of complement deposition, are not normally seen in human allotransplantation,” the study authors wrote in the Journal, according to MedPage Today.

There is evidence that Bennet’s pig-provided heart was infected with porcine cytomegalovirus, a virus that can cause respiratory and pregnancy complications in pigs. However, MedPage Today reported that postmortem samples revealed no indication of porcine cytomegalovirus infection in either Bennett’s thoracic or abdominal regions.

As BioSpace previously reported, the virus has been an issue with other transplants. Porcine cytomegalovirus is not thought to infect humans. But, previous research on porcine organs that were transplanted into baboons showed that some organs later discovered to have the virus failed to function properly in the new host.

Although Bennett ultimately died, the fact that he lived well for two months is seen as a victory for the future. Heart transplant lists are long and the use of porcine hearts could become more commonplace, especially as the technology continues to improve.