Llama Nanobodies May be Missing Link in COVID-19 Therapeutics 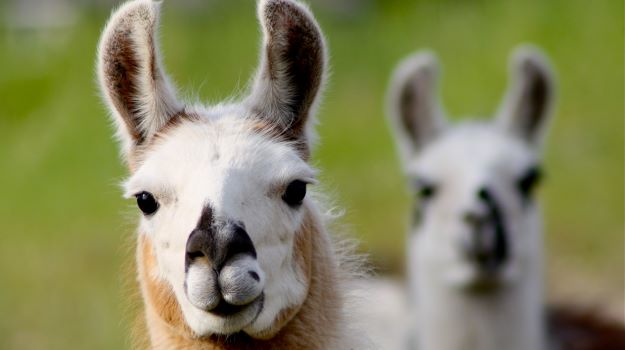 Monoclonal antibodies are playing a key therapeutic role in the treatment of some COVID-19 patients, but new research suggests that nanobodies derived from llamas could provide an alternative to monoclonal antibodies through a more effective delivery method—inhalation.

Llamas and their camelid cousins naturally produce these nanobodies. Because of their size, researchers from the Rosalind Franklin Institute in Oxfordshire believe these nanobodies could offer an improved treatment option over monoclonal antibodies, which currently require infusion. The Rosalind team said inhalation of nanobodies results in “improved bioavailability, simpler therapeutic compliance and easier administration.”

Nanobodies are a special type of antibody naturally developed by llamas and other camelids. Nanobodies are smaller than typical antibodies found in a human, which means they can go into areas where the larger antibodies cannot. In the U.K. research, the nanobodies could bind different epitopes on the receptor-binding domain (RBD) of the SARS-CoV-2 spike (S) glycoprotein with high affinity and ultimately neutralize the viral effects.

Not only can these nanobodies be delivered through inhalation, but the research team also said the potential manufacturing of nanobodies for therapeutic administration is simpler than that of monoclonal antibodies, which require mammalian cells for production. Nanobodies can be manufactured using readily available microbial systems.

The llama nanobodies were secured after the animal had been immunized against COVID-19. After securing the nanobodies from a llama named Fifi, they were administered to hamsters that had been infected with COVID-19 through a nasal spray. After six days, the hamsters recovered from the effects of the virus.

“We have shown that treatment either systemically (intraperitoneal route) or via the respiratory tract (intranasal route) with a single dose of the most potent nanobody prevented disease progression in the Syrian hamster model of COVID-19,” the researchers said.

While the results appear promising, the research team said additional research is required to establish the minimum amount of nanobodies for use in hamsters. More research will have to be conducted with this method before moving into human studies.

The idea of using llama nanobodies against COVID-19 has also been studied by the National Institutes of Health. Last year, researchers from NIH isolated nanobodies from a llama named Cormac. Like the U.K. researchers, the NIH team realized that the nanobodies could be administered through inhalation and injection. Unlike the U.K. approach, the NIH nanobodies bind to the angiotensin-converting enzyme 2 (ACE2) receptor before entering the cells. In its research, the nanobody stuck directly to the ACE2 receptor-binding portion of the spike protein.

Not only has the NIH researcher llama nanobodies against COVID-19, but researchers from the Vlaams Institute for Biotechnology in Ghent and the University of Texas at Austin also explored the camelid antibodies as a potential therapeutic agent.

In August, Belgium-based ExeVir Bio announced it had dosed patients in a Phase I study of its llama-based COVID-19 antibody treatment, XVR011.