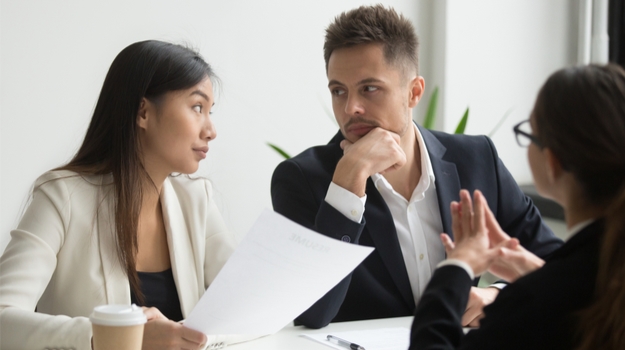 Every aspect of marketing yourself in the job search is highly subjective from the hiring manager’s viewpoint. Many hiring managers agree on candidate interview behaviors that annoy them­­ – sometimes to the extent of sinking the interviewee’s chances. Here are some that hiring managers cite as landmines job seekers can avoid in interviews.

Candidate treats receptionist, assistant or other lower-level staff poorly. Many hiring managers consider their assistant’s opinion important when evaluating potential new hires. Sometimes even the most qualified are disqualified because of the way the receptionist was treated – projecting condescension, arguing about completing an application form, requesting coffee.

Candidate gives long, boring, unfocused, rambling responses to interview questions. Interviewees who give long-winded, disorganized and fuzzy responses usually do so because they are unprepared. They may not be familiar with common interview questions and haven’t thought about how they might answer them. They many have minimally researched the employer with which they are interviewing. To give sharp answers that make you look prepared, study frequently asked questions, and at least ponder how you would answer them. My research suggests that actually composing responses in writing helps to cement them in your mind (but don’t attempt to memorize). Also become sensitive to interviewer reactions; if his or her eyes begin to wander, chances are the interviewer is no longer actively listening your response. Take that as a sign to work on your prep and the clarity and brevity of your answers. Practicing your responses and asking friends to conduct mock interviews with you can also help.

Candidate is inappropriately groomed or attired. A surprising number of hiring managers complain about poorly dressed and groomed candidates. Avoid underdressing, and ensure all the attire and grooming details are put together. Know the employer’s culture well enough to recognize appropriate attire. Don’t assault the employer with heavy fragrances, and especially don’t reek of cigarette smoke. Learn more.

Candidate negatively critiques employer’s company. In her book, Job Search Debugged, Rita Ashley equates the candidate who identifies the negatives in the prospective employer’s company to telling a parent he or she has an ugly baby. The candidate means well. He or she believes the interviewer will be impressed that the interviewee has spotted and analyzed the organization’s issues and challenges. At some point in the interview, the interviewer may even ask for the candidate’s thoughts on a company problem. But an unsolicited critique won’t sit well. A much better approach is to describe results you’ve attained while tackling similar issues for past employers. Acting like a superhero who will swoop in and solve the employer’s problems is smug and insulting.

Candidate oversells himself/herself, exaggerates accomplishments – or undersells as a result of poor sales skills. The key to credible representation of your accomplishments is substantiation. You can tout any accomplishment you want to – as long as you have evidence to show that you really achieved what you said you did ­­– and sprinkle a few drops of humility into your responses. But merely talking about how wonderful you are without proving it won’t cut it. On the flip side, don’t be so humble that you undersell yourself, especially if selling or persuading is integral to the job.

Candidate demonstrates inadequate knowledge of prospective employer. You cannot prove your value to an employer if you know little about the employer. Employer research should always be a key part of interview prep; employers expect it, and many will ask questions to test your knowledge.

Candidate fails to grasp employer’s priorities for position. Ashley, who was a recruiter for 17 years, calls this issue “losing the thread.” This candidate is an extension of the candidate who has conducted insufficient research – and the candidate may not be completely at fault. Job descriptions are notoriously poorly written and often fail to truly convey what the employer needs. That’s why research below the surface is critical. You must talk to members of your network, especially company insiders who have an intimate grasp of what the company is really after. You will also pick up clues as soon as you are in the interview. Listen for the topics the interviewer emphasizes; those are likely the priorities for the job. Be prepared to shift gears if you had planned to focus on different priorities.

Candidate is unenthusiastic, lacks energy. Everyone has an off day, but you need to bring your enthusiastic A-game to each interview. You energetic, engaged demeanor translates to the employer as drive and stamina to do the job and enjoy it. If you’re feeling so low that you think your interview performance will suffer, consider rescheduling. Failing that, suck it up and project enthusiasm for the job.

Candidate has weak handshake. This small piece of nonverbal behavior can be surprisingly significant because hiring decision-makers often believe a weak handshake displays weakness or a lack of confidence. Follow the interviewer’s lead and match the intensity of his or her handshake.