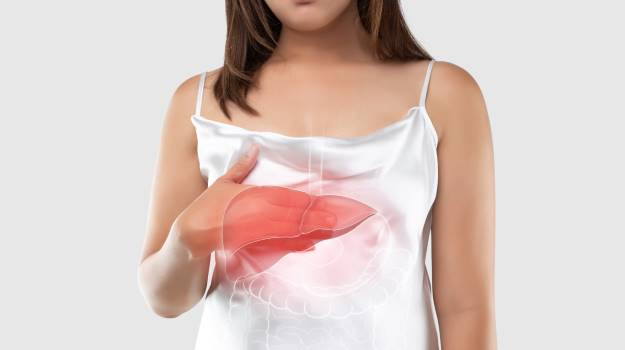 In a study that could have important therapeutic implications, researchers found promising connections between the Neuregulin 4 (NRG4) endocrine factor protein and the suppression of specific liver diseases, including non-alcoholic steatohepatitis (NASH).

The study, published Monday in the journal Cell Metabolism and spearheaded by Dr. Peng Zhang at the University of Michigan Medical Center demonstrated that the NRG4 endocrine factor protein essentially functions as a tumor suppressor for NASH-associated liver cancer. The researchers suggest that targeting the NRG4 hormonal checkpoint could "pave the way" for therapeutic intervention.

Non-alcoholic steatohepatitis (NASH) is a fatty liver disease marked by inflammation and damage to the liver in addition to a buildup of fat. Inflammation in the liver can lead to fibrosis and cirrhosis, leaving the organ permanently damaged and increasing the risk of developing liver cancer. While it is clear that the general cause is a buildup of fat in the liver, it is unclear as to what may cause that buildup.

NASH is notoriously difficult to treat, and because so many people are affected by it, there are many companies aiming to be the victor in this race. As of now, there are no FDA-approved treatments, but some market analysts believe the NASH treatment market could be worth up to $35 billion.

Pfizer announced in May that it received the FDA’s fast track destination for its drugs ervogastat and clesacostat, both potential treatments for NASH.

These two drugs target diacylglycerol O-acyltransferase 2 (DGAT2) and acetyl-CoA carboxylase (ACC), which are two key enzymes in the regulation of fat metabolism. They are based on previous research showing that inhibiting these enzymes may lower liver fat in patients with non-alcoholic fatty liver diseases.

"We are proud to be advancing this investigational combination as part of our goal to develop innovative medicines to address some of the world's most widespread health challenges that affect millions of people - including diseases like NASH," Rusnak added.

There has also recently been research into the CIDEB gene its impacts on liver disease. Regeneron found that people whose genetic material included a loss-of-function mutation in a copy of the CIDEB gene were 53% less likely to develop nonalcoholic liver diseases like NASH. The protein also seemed to offer resilience against type 2 diabetes and obesity.

“The unprecedented protective effect that these CIDEB genetic variants have against liver disease provides us with one of our most exciting targets and potential therapeutic approaches for a notoriously hard-to-treat disease where there are currently no approved treatments, "Aris Baras, M.D., SVP and head of the Regeneron Genetics Center said in a statement.

Pharma giants like Pfizer and Regeneron get a lot of attention in the space, but other companies, like Intercept Pharmaceuticals and GENFIT, also have drugs in Phase III trials targeting NASH. As research advances and more information about the disease becomes available, more companies will likely begin vying for their spots in the potentially lucrative market.