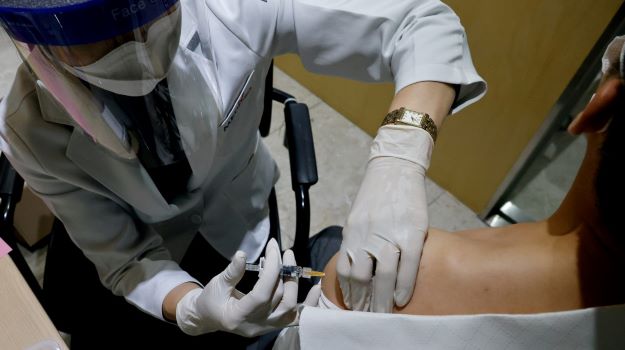 A man gets an influenza vaccine at a branch of the Korea Association of Health Promotion in Seoul, South Korea, October 23, 2020. REUTERS/Kim Hong-Ji/File Photo

Singapore has temporarily halted the use of two flu shots after about 59 people who received them in South Korea died. South Korea, on the other hand, indicated they would continue their state-run vaccination program because they did not find a direct link between the deaths and the vaccinations. No deaths linked to the vaccination have been reported in Singapore.

Singapore has imported two other flu vaccines for the Northern Hemisphere 2020-21 flu season. South Korea urged its citizens to get the flu shots to decrease the odds of an outbreak while they are still battling the COVID-19 pandemic.

Not surprisingly, public anxiety increased after the deaths, and last month, according to the South China Morning Post, almost 5 million doses were thrown out after not being stored at the appropriate temperatures.

“Vaccination offers far greater benefits compared to side effects, and both the WHO and domestic and overseas experts agree,” stated Park Neung-hoo, South Korea’s Health Minister.

According to the South Korean government, more than 1,500 elderly individuals died within seven days of receiving flu vaccines last year, but the deaths were not linked to the vaccines. This year, the country ordered 20% more flu vaccines over concerns about a so-called “twindemic,” of major flu and COVID-19 during the winter.

Since South Korea’s vaccination program began in September, more than 9.4 million people have been inoculated, while only 1,154 have reported adverse reactions.

South Korea’s vaccine program includes seven different influenza vaccines. The only two also available in Singapore are the SKYCellflu Quadrivalent and VaxigripTetra. The two others being ordered in Singapore are not currently being distributed in South Korea.

Reports indicate the fatalities are mostly in people in their 70s and 80s.

Sanofi issued a statement to Fierce Pharma, emphasizing the Korea Disease Control and Prevention Agency (IDAC)’s investigations and the lack of a link between the deaths and the vaccines.

South Korea’s President Moon Jae-in stated, “Do trust the health authorities’ conclusion … reached after a review with experts. There is a need to expand the influenza vaccination this year not only to prevent the flu, but also to ward off concurrent infection and spread of flu and COVID-19.”

The CDC indicates it takes about two weeks after vaccination for antibodies to develop against the virus. There is no evidence that the flu vaccine increases your risk of sickness from a coronavirus, such as the one that causes COVID-19.

Few, if any, vaccines work 100% of the time, meaning that it’s possible that if you get a flu vaccine, you will still get the flu. It varies from year to year. The CDC notes, however, “flu vaccination has been shown in some studies to reduce severity of illness in people who get vaccinated but still get sick. A 2017 study showed that flu vaccination reduced deaths, intensive care unit (KCU) admissions, ICU length of stay, and overall duration of hospitalization among hospitalized adults with flu.”