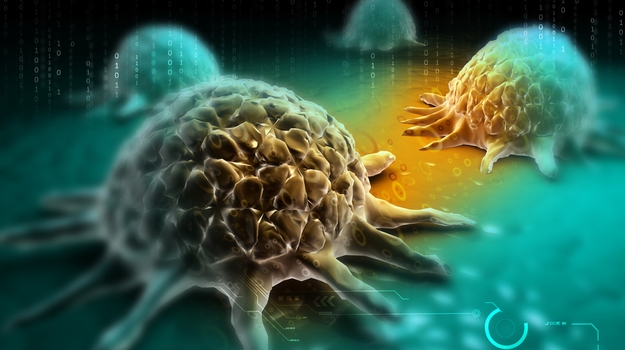 It’s something of the Holy Grail, a kind of immune cell that can attack all types of cancer cells. Researchers at Cardiff University in the UK appear to have discovered just that. They published their research in the journal Nature Immunology.

The researchers essentially identified a new T-cell and its receptor that appears able to search out and kill a broad range of cancer cells, including lung, skin, blood, colon, breast, bone, prostate, ovarian, kidney and cervical cancer cells. It left noncancerous cells alone.

“There’s a chance here to treat every patient,” Andrew Sewell, professor, Division of Infection and Immunity, School of Medicine at Cardiff, told the BBC. “Previously nobody believed this could be possible. It raises the prospect of a ‘one-size-fits-all’ cancer treatment, a single type of T-cell that could be capable of destroying many different types of cancers across the population.”

The T-cell they identified interacts with a cell surface molecule, MR1. MR1 is believed to flag the abnormal metabolism inside a cancer cell.

Immuno-oncology is a rapidly expanding field, leveraging the human immune system to fight the cancer itself. The best-known examples are CAR-T therapies, notably Novartis’ Kymria (tisagenlecleucel) and Gilead Sciences’ Yescarta (axicabtagene ciloleucel). These therapies essentially take immune cells from the cancer patient, engineer them to specifically attack the patient’s cancer, then are reinfused back into the patient. They become living therapies, growing in the body to attack the cancer.

They are quite effective in blood cancers but haven’t been proven to be as useful for solid tumors. These types of therapies have also been limited to certain cancers where there is a clear target to engineer the T-cells to identify.

This new discovery has the potential to lead to a “universal” cancer therapy. The idea is the same. The T-cells would be extracted, genetically modified to identify the cancer cells, then injected back into the patient. However, the Cardiff group has only tested this approach in the laboratory animals and on cell cultures. More studies would need to be conducted before it could be tested in humans.

Daniel Davis, researcher at the University of Manchester, who was not involved in the study, told the BBC, “At the moment, this is very basic research and not close to actual medicines for patients. There is no question that it’s a very exciting discovery, both for advancing our basic knowledge about the immune system and for the possibility of future new medicines.”

They tested the work in laboratory mice as well as in human melanoma cells. The research demonstrated that the melanoma patients’ T-cells could be modified to express this new TCR and kill their cancer cells in Petri dishes, but also other patients’ cancer cells. They hope to take the technique into clinical trials by the end of the year.

Sewell told the Irish Times, “We hope this new TCR may provide us with a different route to target and destroy a wide range of cancers in all individuals. Current TCR-based therapies can only be used in a minority of patients with a minority of cancers. Cancer-targeting via MR1-restricted T-cells is an exciting new frontier.”