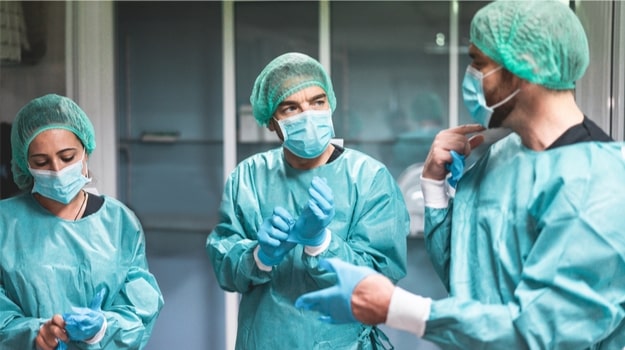 Healthcare Workers Most at Risk for COVID-19

A study out of Rutgers University found that healthcare staffers, especially nurses, have a higher prevalence of COVID-19 than non-healthcare workers. The study data came from a prospective study of participants at Rutgers and affiliated hospitals during the early phase of the pandemic. As of November 15, 2020, according to the U.S. Centers for Disease Control and Prevention (CDC), there were more than 216,000 confirmed COVID-19 cases in healthcare workers in the U.S., with at least 799 recorded deaths. The study evaluated 546 healthcare works with direct patient exposure at two hospitals in New Jersey and 283 non-healthcare workers that did not have direct patient contact. The results were published in the journal BMC Infectious Diseases.

“We have all heard about how healthcare workers are the heroes on the frontlines of this pandemic, but we still don’t have solid answers about the risks to healthcare workers and who is most at risk,” said Emily Barrett, associate professor of biostatistics and epidemiology at Rutgers School of Public Health and lead co-author of the study. “The initial results show that at the beginning of the pandemic, the higher rate of infection observed in urban North New Jersey areas, like Newark, was also reflected in the healthcare workers serving those communities.”

The healthcare workers most likely to test positive cared for five or more COVID-19 patients (suspected or confirmed) and who spent a significant proportion of their time in patients’ rooms. Of the 40 healthcare workers who tested positive of the study group, 25 were nurses.

Researchers with the German Center for Neurodegenerative Diseases (DZNE) working in mice found that Alzheimer’s began much earlier with a fatal chain reaction that results in misfolded beta-amyloid proteins that get out of control and “literally floods the brain.” They found this reaction in mice began much earlier than believed. It’s been well known that there was an earlier phase of Alzheimer’s is marked by protein deposits but no dementia symptoms. But this “chain reaction” period is even earlier where the chain reaction is triggered by seeds of aggregation. It has not yet been confirmed to also occur in humans. The study not only confirms treatment should start early, but suggests that treatment should focus on addressing the causes of this far earlier trigger.

Melatonin is a dietary supplement to help with sleep and recover from jet lag, but how and why it works isn’t well understood. Investigators with the University of Connecticut conducted research using melatonin to put worms to sleep and found out why it promotes sleep. Melatonin is produced by the body in darkness. It is a hormone. It binds to melatonin receptors in the brain to produce the sleep effects. The receptors for melatonin are MT1 and MT2 in human brain cells. Working with C. elegans worms, they found that when melatonin locks into the MT1 receptor in the worms, it opens a potassium channel, BK. The major function of the BK channel in neurons is to limit the release of neurotransmitters.

Researchers at the University of California, Berkeley, found that deep sleep appears to have a protective effect against Alzheimer’s. In essence, during the deepest part of sleep, the brain clears itself of debris, including beta-amyloid and tau, two types of proteins that accumulate abnormally in Alzheimer’s patients. They evaluated 32 people in their 70s who had been part of a sleep study evaluating the slow electrical waves that are indications of deep sleep. None had memory problems. They then used brain scans to evaluate beta-amyloid levels for up to six years. They found people with less deep sleep had higher beta-amyloid levels.

“There is something about this deep sleep that is protecting you,” Matthew Walker, professor of neuroscience and psychology at UC-Berkeley, told NPR. “We are now learning that there is a significant relationship between sleep and dementia, particularly Alzheimer’s disease.”

Increase of Non-COVID-19 Deaths from March Through May

A study from the University of Illinois at Urbana-Champaign conducted a data analysis on death rates from March through May from COVID-19 and from other causes. The findings were that the death rate in several demographics exceeded the same period in 2019. The data was from the U.S. Centers for Disease Control and Prevention (CDC) and sorted by age and gender. The 2019 full data is not yet publicly available, but they calculated the 2019 death estimates using 2018 CDC data and 2019 population estimates from the U.S. Census Bureau and compared the provisional non-COVID-19 death numbers for 2020. They found a significant increase in excess deaths in 2020 in men between 15 and 59 years of age and for women between 25 and 44. The only demographic that showed a decrease in deaths was females between the ages of 5 and 14. Most deaths in that age group are typically from accidents, so they believe the decrease is related to the shutdowns in much of the country. They plan to continue their data analysis for March through August and eventually the entire year.

Your Retina May Help Predict Alzheimer’s

Scientists with Cedars Sinai Department of Neurosurgery identified specific regions in the retina that are most affected by Alzheimer’s disease. They believe this could help predict changes in the brain as well as cognitive function, even in early Alzheimer’s disease. The study was published in Alzheimer’s & Dementia: Diagnosis, Assessment & Disease Monitoring. It was based on a clinical trial of people older than 40 who were showing symptoms of cognitive decline. They used a noninvasive technique called sectoral retinal amyloid imaging that took images of the retina. The retina, the lining in the back of the eye, is directly connected to the brain and is the only CNS tissue accessible for “patient-friendly, high-resolution and noninvasive imaging.”

“These clues can occur very early on in the progression of Alzheimer’s disease — several decades before symptoms appear,” said Maya Koronyo-Hamaoui, associate professor of Neurosurgery and Biomedical Sciences and co-corresponding author of the study. “Detecting these signs can help diagnose the disease more accurately, allowing for earlier and more effective treatment intervention.

The studies found increased levels of retinal amyloid-beta peptides that correlated with levels found in brain tissues, even in the latest stages of the disease. Koronyo-Hamaoui thinks it’s possible that a specific form of immune-modulation therapy might be able to fight Alzheimer’s by decreasing toxic proteins and harmful inflammation in the brain. It may also improve the immune response that protects the connections between neurons.