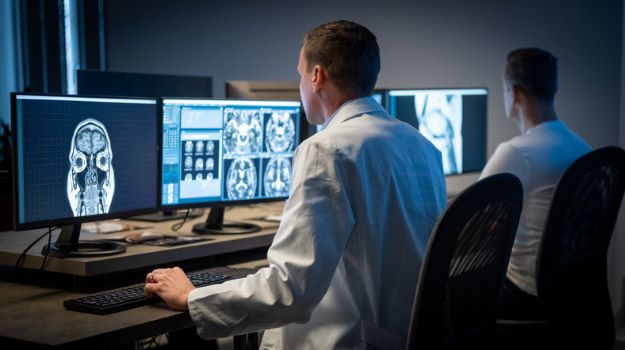 A new study on Alzheimer's disease ties the brain's immune response to the condition, while scientists have identified a better antibody treatment for cancer and possible cell toxicity in CRISPR-Cas9 gene editing.

For that and more, continue reading.

Researchers with The Mount Sinai Hospital/Mount Sinai School of Medicine, working with fresh human brain tissue harvested by way of biopsies or autopsies from 150 donors, identified 21 genes that could elevate the risk Alzheimer's disease.

In particular, they point to SPI1, a possible key regulator of microglia, immune cells in the brain. Microglia are primarily responsible for the brain's immune response but play an important role in the development and maintenance of neurons.

This is not the first study to target microglia as playing a vital role in the genetic risk and development of Alzheimer's disease because of their involvement in maintaining brain cells and battling inflammation, both issues with Alzheimer's disease. The research was published in Nature Genetics.

"Our study is the largest human fresh-tissue microglia analysis to date of genetic risk factors that might predispose someone to Alzheimer's disease," senior author Panos Roussos, M.D., Ph.D., professor of psychiatry and genetic and genomic sciences at the Icahn School of Medicine at Mount Sinai and director of the Center for Disease Neurogenomics, said.

"By better understanding the molecular and genetic mechanisms involved in microglia function, we're in a much better position to unravel the regulatory landscape that controls that function and contributes to AD," Roussos added. That knowledge, he said, could pave the way for novel therapeutic interventions for AD.

Microglia are notoriously difficult to isolate and examine, but they managed to cull 150 high-quality microglia. They then compared epigenetic, gene expression, and genetic information from the samples in both Alzheimer's and healthy aged patients. In addition to expanding on previous DNA regulatory sequence data and genes whose dysregulation directly contributes to Alzheimer's, they described the cell-wide regulatory mechanisms that may help identify genetic regions implicated in specific aspects of microglial activity.

Scientists at Tel Aviv University and the University of Lisbon have identified and synthesized a small molecule they believe can be a better antibody to treat a variety of cancers. As is well known, T cells express a protein called PD-1 that disables their activity when it binds to the PD-L1 protein expressed in cancer cells, essentially allowing cancer cells to shut down the immune response against them.

This led to the development of checkpoint inhibitors, antibodies that block either PD-1 or PD-L1, allowing the T cells to attack the cancer cells. However, these antibodies are expensive and have been difficult to develop for solid tumors — they're quite effective in blood cancers. Using bioinformatic and data analysis tools, the researchers identified a smaller molecule that appears to control tumor growth and the other antibodies by inhibiting PD-1/PD-L1 binding. It is biological rather than synthetic and is much simpler and inexpensive to create. They also think it should be able to be taken orally instead of intravenously.

What are Cell Antennae?

Almost every cell type in the human body has a rod-like projection called cilia. Researchers from Ohio State University looked at cilia on neurons in the brain in a mouse model of a neurological disorder called Bardet-Biedl syndrome.

They were looking at dopamine receptor 1, one of five proteins that regulate dopamine signaling. In some parts of the brain, this receptor switches on motivated behavior. But their research found that if the receptor gets stuck on cilia or isn't given an opportunity to localize to the cilia, messages telling the body to move are decreased.

Dopamine receptor 1 appears to require getting to and from neuronal cilia for proper signaling. Bardet-Biedl syndrome is in a class of diseases called ciliopathies, where dysfunctional cilia on a range of cell types can cause multiple organ system defects, blindness, obesity and intellectual disabilities. In the mouse model, deletion of these Bardet-Biedl syndrome proteins hindered the movement of certain receptors to and from primary cilia.

CRISPR-Cas9 Gene Editing can Cause Cell Toxicity and Genome Instability

Researchers at IRB Barcelona have reported that if gene editing occurs at certain spots of the human genome, it can cause cell toxicity and genomic instability.

CRISPR-Cas9 is a type of very precise gene editing, and since the beginning, there have been concerns over off-target edits. The effect is mediated by the linchpin tumor suppressor protein p53 and depends upon the DNA sequence near the editing point and various epigenetic factors in the surrounding location. The researchers analyzed the most popular CRISPR library designed for human cells and identified 3,300 targeted spots demonstrating strong toxic effects. They also reported that about 15% of human genes contain at least one toxic editing point.

A study by the University of Kent in the U.K. and Goethe-University in Germany have found new therapies for COVID-19 that may offer better protection against future variants and outbreaks.

They tested the sensitivity of various SARS-CoV-2 Omicron and Delta viruses to combinations of four approved antiviral drugs with betaferon, another class of antiviral drug naturally produced in the body. They found that these new combinations were, at least in cell culture assays, highly effective. The addition of the interferon with molnupiravir (Merck's Lagevrio), nirmatrelvir (one of the antivirals in Pfizer's Paxlovid) and aprotinin (Bayer's Trasylol) was much more effective than interferon combinations with remdesivir (Gilead's Veklury).

"These are exciting findings that will hopefully help to improve the treatment of vulnerable COVID-19 patients and to avoid the formation of resistant viruses as much as possible," Martin Michaelis, Ph.D., the University of Kent, stated.