ROCKVILLE, Md., Oct. 15, 2020 /PRNewswire/ -- A new study published in the peer-reviewed journal Frontiers in Psychiatry finds the high-potency De Simone Formulation probiotic medical food may positively impact behavioral profiles in some children with Autism Spectrum Disorder (ASD). The De Simone Formulation, which has been the subject of more than 70 clinical studies, is distributed in North America by Rockville, Maryland-based ExeGi Pharma under the brand name, Visbiome®. 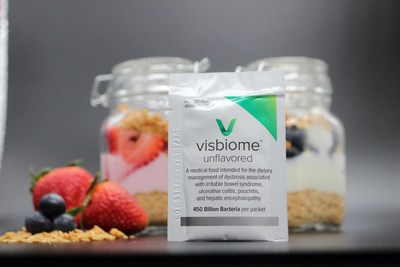 The gut-brain axis and the neurological influence of the microbiome have been the subject of significant scientific interest in recent years. In ASD, although a causative link has not been established between the gut microbiota and neurological activity, researchers have found evidence of altered gut microbiota in children with ASD.1 Interestingly, children with autism are also four times more likely to experience recurrent gastrointestinal problems, relative to children without ASD, and the severity of GI dysfunction has been strongly correlated to autism severity.2

In this new study, patients from Italy were recruited to a clinical center located in the Tuscany region where the possible role of the Visbiome probiotic was evaluated in patients with and without GI problems. Investigators used a double-blind, placebo-controlled design with four groups to evaluate the probiotic intervention in ASD patients with GI symptoms (GI) and without GI symptoms (NGI) vs. placebo. Eighty-five preschool-age children were randomized to receive the probiotic or placebo, and 63 subjects completed the study. The primary outcome of the trial was improvement in the severity of ASD behaviors, evaluated using the Total Autism Diagnostic Observation Schedule - Calibrated Severity Score (ADOS-CSS) and the Social-Affect ADOS CSS. Secondary endpoints included a number of gastrointestinal symptom measures, using the GI Severity Index, and self-reporting parent rating scales. Children in the active, probiotic groups were administered a high dosage of probiotic bacteria in amounts of 900 billion live bacteria per day for the first month, followed by 450 billion per day for the next five months of the study.

The De Simone Formulation, marketed as Visbiome in the U.S., is a proprietary blend of eight probiotic strains. The formulation has previously been the subject of nearly 20 years of clinical research in a variety of applications, including as a medical food for the dietary management of IBS and ulcerative colitis.

At the conclusion of the study, the investigators found a decrease in core ASD behavioral symptoms in subgroup analyses of the GI and NGI arms, although efficacy in the two treatment groups as a whole did not reach statistical significance. When results of the probiotic treated patients in the NGI group (patients with no GI issues) were compared to those receiving placebo in the NGI group, there was a statistically significant reduction in the Total ADOS-CSS score (mean reduction 0.81, P=0.026) and the Social-Affect ADOS-CSS score (mean reduction 1.14, P=0.027).3 In the subgroup analysis of children with GI symptoms, the probiotic intervention demonstrated statistically significant improvements vs. placebo on GI symptoms and certain core ASD behaviors: namely adaptive functioning and multisensory processing. No serious adverse events were reported in either group. The authors hypothesized that the positive changes found in the NGI subgroup could be a result of a complex interaction between gastrointestinal problems and adaptive functioning, which are tied to the serotonin system. Serotonin is a neurotransmitter that is primarily located in the GI tract and plays a key role in regulating mood and social behavior.

"These novel findings represent an important discovery for the field of ASD research by showing that probiotic therapy has the potential to improve core symptoms of autism," said Suzanne Goh, MD, pediatric neurologist and chief medical officer at Cortica Healthcare in California. "Based on this trial, we should continue to investigate the gut-brain axis in the nexus of autism and the potential role of microbiome modulation as a therapeutic intervention."

About ExeGi Pharma
ExeGi Pharma LLC is a biotechnology company focused on the development and commercialization of live biotherapeutic and probiotic medicines. ExeGi's team leverages scientific expertise in the field of microbiome science to deliver novel, clinically supported live biotherapeutic and probiotic products for a variety of unmet health and medical needs. ExeGi is headquartered in Rockville, MD.

About Visbiome
Visbiome (De Simone Formulation) is available in the U.S. as a medical food for the dietary management of dysbiosis associated with IBS, ulcerative colitis, pouchitis and hepatic encephalopathy. Visbiome contains live, lyophilized, probiotic cultures for oral administration in doses of 112.5 billion to 900 billion live bacteria. The De Simone Formulation is sold under the name Vivomixx® in Europe.

Visbiome is not intended for use in the diagnosis, cure, mitigation, treatment, or prevention of any disease and is not approved by the FDA for any drug indication.