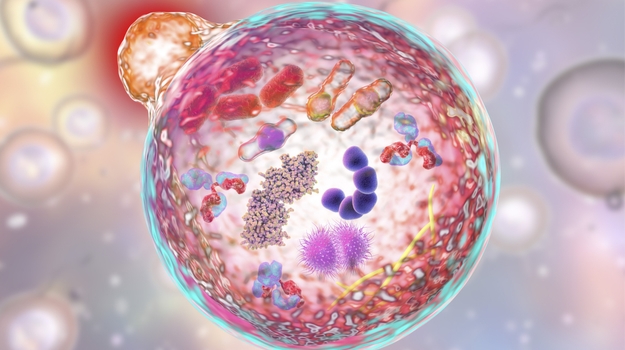 Pinpoint Therapeutics believes that its approach to treat therapy-resistant cancers also may be effective against COVID-19.

The molecule Pinpoint is developing, dimeric chloroquine, targets PPT1, an enzyme in the autophagy pathway that tumors use to block therapeutics. CEO Christian Peters, M.D., Ph.D., believes targeting this pathway and, specifically, the PPT1 enzyme, could prevent the COVID-19 virus from entering cells to cause infections.

PPT1 controls both autophagy (essentially, cellular recycling) as well as the mechanistic the target of rapamycin known as mTOR, which regulates growth in cancer cells.

Dimeric chloroquine works by altering the lysosomal function (within the cell) which inhibits the PPT1 enzyme and therefore blocks the autophagy response. Pinpoint scientists are optimistic this approach will be effective against COVID-19 because it, too, relies on the lysosome to replicate.

Most of the work, so far, has been conducted in a cancer setting, where in vitro and animal models exhibited greater inhibition both in terms of tumor size and numbers. Emerging clinical trial results benefits in humans, too.

Chloroquine has a well-established track record as a malaria drug, with some 60 years of use. Side effects include neurotoxicity and, in news last week by William J. Crumb Jr., Ph.D., director of scientific operations, Nova Research Laboratories, a change in patients’ QT intervals in electrocardiograms. That change, Dr. Crumb says, is associated with cardiac arrhythmias and sudden cardiac death.

The dimeric chloroquine being advanced by Pinpoint Therapeutics aims to minimize chloroquine’s risks.

Dimeric chloroquine is simply two chloroquine molecules linked together. But that linkage means that the resulting molecule is larger and more potent that chloroquine alone. “When linked, the chemical structure enhances efficacy,” Peters said.

“It’s designed to be safer. Because it’s larger than chloroquine, early tests in mice show it doesn’t break the blood brain barrier.” Consequently, scientist hope it may reduce the neurotoxicity of chloroquine. It also can be better targeted.

“We have data showing the molecular target for hydroxychloroquine is more effectively inhibited by our dimeric chloroquine,” Dr. Peters said. Pinpoint’s researchers are hopeful that dimeric chloroquine will exhibit anti-inflammatory as well as anti-viral properties. Chloroquines inhibit IL1, IL6, and tumor necrosis factor, so reducing inflammatory immune response is expected. Therefore, it may have the potential to mitigate swelling tissues and the build-up of fluid in the lungs.

This drug, however, still needs to be tested, Dr. Peters emphasized. Testing in animal tumor models is planned to begin in April. Currently, Pinpoint is validating prior research before speaking with the FDA or conducting toxicology testing. Clinical trials may be initiated, at the earliest, next year.

Pinpoint’s work on dimeric chloroquine began last autumn. One of the company’s cofounders, Ravi K. Amaravadi, M.D., an associate professor of Hematology Oncology in the Perelman School of Medicine at the University of Pennsylvania, discussed the technology with Dr. Peters about a year ago. “He mentioned the potential for antiviral efficacy based on the experience of chloroquine,” Dr. Peters recalled.

“We decided last fall to focus on cancer, but prepared a preliminary patent filing for specific uses. We had antiviral applications in mind, mentally filed in the category of ‘predictable surprises,’” he said.

The company moved quickly, too. It filed a provisional patent and, “Dr. Amaravadi and the University of Pennsylvania were extraordinarily quick to put together a research proposal and Kairos was quick to fund it,” Dr. Peters said.

Speed is good, but so are resources, and Pinpoint is thin on infrastructure. With no labs of its own, the young company is using its founders’ labs at the University of Pennsylvania.

Because the initial work targeted cancer rather than COVID-19, the labs were closed, along with other “non-essential” university functions. With the pivot to COVID-19, “We are in the process of making a lab operational,” Dr. Peters says.

If dimeric chloroquine shows efficacy during in vitro screening against COVID-19, FDA Fast Track, Breakthrough Therapy, or Accelerated Review status could be possible. Pinpoint’s next milestone, though, is filing its investigational new drug (IND) application with the FDA.

Pinpoint Therapeutics raised $1 million in venture funding from Kairos Ventures in February. “This initial round of financing will allow us to develop a new approach to drugging autophagy, which until now seemed difficult to target in cancer,” Dr. Peters said during that announcement. Now, he hopes, it also may prove to be a potent molecule against COVID-19.