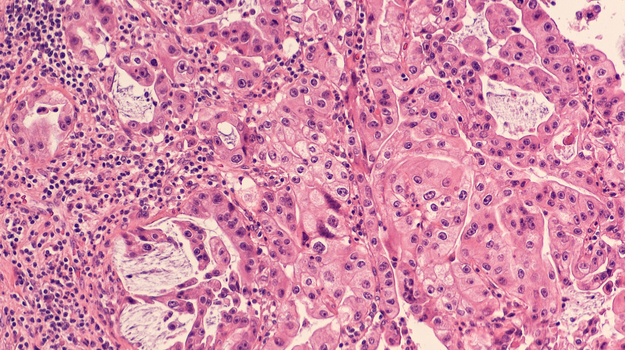 Pancreatic cancer is a particularly difficult cancer to treat, and although there have been advances in treatment, it is still an extremely deadly disease. Here’s a look at some recent news concerning pancreatic cancer.

Boston Biomedical reported that its CanStem111P trial investigating napabucasin plus weekly nab-paclitaxel with gemcitabine compared to weekly nab-paclitaxel with gemcitabine in metastatic pancreatic ductal adenocarcinoma is being halted. This was based on a recommendation by the independent Data and Safety Monitoring Board (DSMB) review that was scheduled for the halfway mark of the trial. Although there were no new safety concerns, the results apparently did not indicate there was sufficient efficacy to continue. Napabucasin is an oral drug bioactivated by NQO1, which creates reactive oxygen species (ROS) that affect multiple cancer pathways, including the STAT3 pathway. The drug is also being evaluated for metastatic colorectal cancer and in solid malignancies.

Researchers at Cold Spring Harbor Laboratory (CSHL) published research in the journal Cancer Discovery describing a way cancer cells attack their own mitochondria, which may be a new target for pancreatic cancer drugs. The scientists found that cancer cells appear to attack mitochondria because of reactive oxygen species (ROS) the mitochondria produce as a result of their energy production. The study focused on the KRAS protein which is active in the nutrient-depleted environment of pancreatic cancers. KRAS launches a signaling cascade that causes the cell to eat its own mitochondria and divert glucose and glutamine away from the rest of the mitochondria.

Because cancer cells of all types divide so fast, they consume a lot of fuel, usually in the form of glucose and glutamine. The process is called micropinocytosis. Researchers from Sanford Burnham Prebys have found a signaling pathway that regulate micropinocytosis in pancreatic tumors.

“To find the metabolic Achilles’ heel of pancreatic cancer, we need a deeper understanding of how these tumors obtain nutrients,” stated Cosimo Commisso, senior author of the study and assistant professor in Sanford Burnham Prebys’ NCI-designated Cancer Center. “Our study reveals that, like people, pancreatic cancer metabolism is diverse. Some pancreatic tumors can ‘dial up’ or ‘dial down’ micropinocytosis depending on the availability of glutamine—an amino acid that plays a key role in the metabolism of rapidly growing cells. Other tumors have naturally high levels of ‘always on’ micropinocytosis. We also identified the molecular regulators of this process, which may ultimately lead to personalized treatments.”

The Pancreatic Cancer Action Network (PanCAN) announced new leadership for its Scientific and Medical Advisory Board (SMAB). Andrew M. Lowy, Professor of Surgery and chief of the Division of Surgical Oncologica at the University of California San Diego School of Medicine will act as the new chair. Margaret A. Empero, director of the UCSF Pancreas Center and Professor of Medicine at the University of California, San Francisco, is the new chair-elect.

Patients with pancreatic cancer overproduce CA19-9, a sugar molecule associated with the disease, but which was previously thought to be harmless. Now they found that it plans a significant role in causing pancreatic cancer. As it accumulates, it appears to attach to other molecules, changing the structure and function of those proteins.

Danielle Engle, lead author of the study and a former postdoctoral fellow at Cold Spring Harbor Laboratory, who is now an assistant professor at the Salk Institute, stated, “This is one of those unique opportunities where prophylactic intervention of pancreatitis may lead to prevention of pancreatic cancer in at-risk patients. Pancreatitis is required for developing pancreatic cancer, and we might be able to prevent that transition in patients with pancreatitis by targeting CA19-9.”

The clinical potential is great. If researchers can develop an antibody against CA19-9 that blocks pancreatic inflammation, it might help patients with chronic pancreatitis, and would potentially have benefits in decreasing the risk of pancreatic cancer.