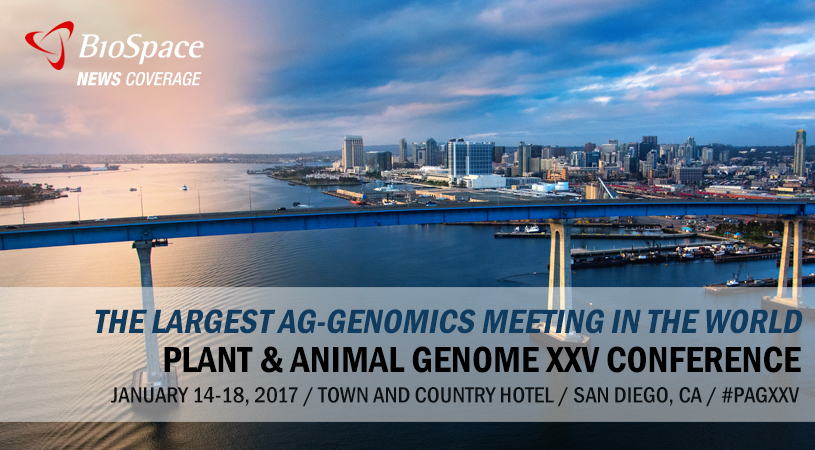 SAN DIEGO – Spend a few days at the Plant & Animal Genome (PAG) conference in San Diego and the study of human genomes appears almost simple by comparison. Consider the sheer diversity of species being discussed: wheat, corn, poultry, persimmons, yellowtail, and even white rhinos. Understanding plant and animal genomics is a means towards advancing conservation, food production and disease prevention.

“Why is the gap between the public and the scientists on the safety of GMOs the largest gap of any politicized scientific topic?” asked Kennedy. “That gap exists, even when the same respected scientific organizations we trust, on climate change for example, concluded that GMOs are safe for ourselves and the planet.”

Kennedy showed several clips from the movie, some of which focused on efforts to fight devastating crop diseases. One often-cited success story is the Rainbow papaya, a disease-resistant GMO that single-handedly saved the Hawaiian papaya industry from ringspot virus.

After the clip, Kennedy noted that some Hawaiian politicians had even sought to ban GMOs while grandfathering in the Rainbow papaya. Still, the fear being generated by GMOs has viral properties all its own.

“The real damage is being felt in countries like Uganda, where food insecurity, being caused by diseases like banana wilt, are a life-threatening reality,” said Kennedy. African scientists are working on bananas that resist wilt, but their efforts are being kept away from farmers over GMO fears.

On Monday morning, Rob Martienssen, professor and HHMI investigator at Cold Spring Harbor Laboratory, recounted efforts to understand the epigenetic mechanisms that modulate gene expression in Arabidopsis pollen and how that work led to a better understanding of disease in cloned oil palms.

“Clones are not as identical as they should be,” noted Martienssen.

Martienssen uncovered a complex dance between transposons, epigenetically activated small interfering RNAs and other molecular mechanisms in pollen, which can have a dramatic effect on whether plants reset their epigenetic marks and ultimately gene expression.

“Unlike mammals, where you see a dramatic reduction in DNA methylation followed by resetting,” said Martienssen, “in plants, DNA methylation stays basically the same throughout the germline. What that means is epigenetic inheritance is much easier.”

Oil palm clones have been troubled by abnormalities that can lead to a disease called mantling, which dramatically reduces oil production.

“This makes cloning a much riskier business than you would imagine if you’re trying to increase yields,” said Martienssen.

In a study published in Nature, Martienssen and colleagues built on the Arabidopsis work and found that mantling in cloned oil palms comes from a single genetic element, ironically called karma. The methylated gene, which produces healthy plants, is good karma, while the unmethylated version is called bad karma.

“We now have a simple and robust predictor of loss of methylation and bad karma,” said Martienssen. “We can use that, with very high accuracy, to predict which plants are going to be mantled and which are not.”

Martienssen finished with a striking image from northern Borneo of an ancient rainforest adjacent to a palm oil plantation. With the new technique to identify plants susceptible to mantling, farmers can potentially increase their yields and may not be tempted to carve out more rainforest.