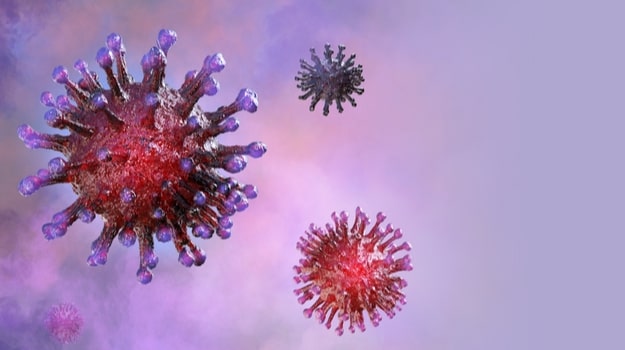 Researchers have been analyzing and tracking the novel coronavirus, SARS-CoV-2, since it first appeared in China in January. Researchers at The Scripps Research Institute have found that the strains spreading so quickly in Europe and the U.S. have a mutated S “spike” protein that makes it about 10 times more infectious than the strain that originally was identified in Asia. The research was published online on bioRxiv and has yet to be peer-reviewed.

The mutation does not appear to make the virus any more deadly than it already is, but it does appear to make it significantly more contagious. The original strain in China is dubbed D614, while the one found in the UK, Italy and North America by May is dubbed G614.

The S “spike” protein is found on the surface of the virus and is used to gain entry to cells, something like a key in a lock. But the original strain, D614, often broke off when it was attempting to bind to ACE2 receptors in people’s airways. The mutated version, G614, is less likely to break off, allowing it to more easily make its way into cells.

ACE2 receptors are molecules on the surface of cells found throughout the body, but in particularly high concentrations in the lungs, although they are found in various organs, including the pancreas and testes. ACE2 receptors vary in concentrations and are also linked to high blood pressure.

The researchers believe this mutation is approximately 10 times more infectious than the original viral strain.

Hyeryun Cho, lead research of the study by the Scripps Institute, told the Washington Post that the mutation appeared to “compensate” for the fragility of the spike protein in the past.

Cho and her colleagues studied the differences between the spike proteins. They write, “These results show SG614 is more stable than SD614, consistent with epidemiological data suggesting that viruses with SG614 transmit more efficiently.”

Cho added, “The epidemiological study and our data together really explain why the [G variant’s] spread in Europe and the US was really fast. … This is not just accidental.”

Although it’s certainly not good news, the positive aspect of the findings, at least so far, are that the genetic mutations do not seem to make the virus more—or less—deadly. The spike protein does not appear to have anything to do with the virus’ ability to reproduce (replicate) once it infects a cell. But it does make it easier for the cell to be infected.

As a research study about HIV in 2014 by the UK’s National Health Service noted, “The optimal evolutionary strategy for a virus is to be infectious (so it creates more copies of itself) but non-lethal (so its host population doesn’t die out).”

The study by Cho and colleagues noted, “An interesting question is why viruses carrying the more stable SG614 appear to be more transmissible without resulting in a major observable difference in disease severity. It is possible that higher levels of functional S protein observed with SG614 increase the chance of host-to-host transmission, but that other factors limit the rate and efficiency of intra-host replication.”

The Scripps research, along with research conducted by investigators at the University of Sheffield and Los Alamos National Laboratory in New Mexico, indicate that the more fragile D614 spike protein that was originally discovered in Wuhan, China, was likely the virus’s original state in humans, and made up the vast majority of all COVID-19 infections in China and Asia. The mutated version, G614, appears to have spread shortly afterward in Europe and North America, then became the dominant form of the virus.

“A clear and consistent pattern was observed in almost every place where adequate sampling was available,” the researchers said. “In most countries and states where COVID-19 epidemic was initiated and where sequences were sampled prior to March 1, the D614 form was the dominant local form early in the epidemic. Wherever G614 entered a population, a rapid rise in its frequency followed, and in many cases G614 became the dominant local form in a matter off only a few weeks.”

They believe that the mutation not only makes it easier for the virus to infect people, but more likely to spread, partially because the patients with the new mutation appeared to have a higher viral load when infected with the tougher strain, meaning higher amounts of virus circulating in their body.