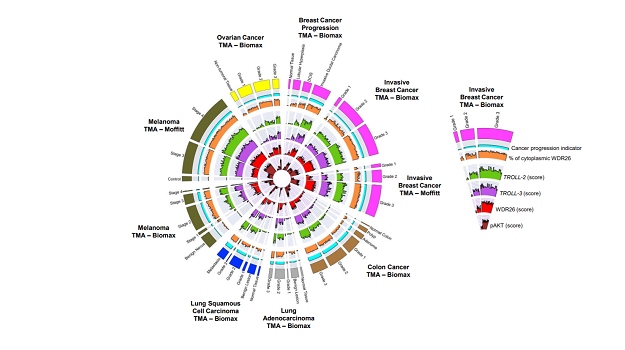 Researchers from the Moffitt Cancer Center published a new study in the journal Nature Communications on Oct. 14 detailing their latest pan-cancer analysis. Through their work, they were able to determine that the protein, TAp63, appears to impact the level of RNA molecules within the body. This subsequently connects the activities of p53 and AKT, the altered genes in cancer.

Mutations in p53, in particular, can impact the TAp63 protein and block its anti-cancer properties, thus encouraging tumor development. Similarly, AKT is a mediator of cancer progression that affects proliferation, migration, invasion and survival.

The researchers from Moffitt had previously been able to show that TAp63 acts as a tumor suppressor gene, and that a loss of its activity can result in tumor growth. They made it their goal to determine in follow-up studies whether a loss of TAp63 activity could lead to cancer in a therapeutic setting.

In the end, they were able to connect the protein to a type of RNA molecule called long noncoding RNA (lncRNA). Altered expression or activity of lncRNA in the body can lead to the develop and progression of disease. Along with researchers from the MD Anderson Cancer Center, Baylor College of Medicine, University of Houston and University of Nottingham, the Moffitt researchers were able to demonstrate their findings in laboratory and mouse studies.

The study appeared to suggest that lncRNAs stimulate cell migration and invasion, and high expression of two of the lncRNAs (TROLL-2 and TROLL-3) were associated with breast cancer progression. TROLL-2 and TROLL-3 also seemed to be highly expressed in a variety of metastatic human cancers.

“Our findings identify a crucial mechanism for the activation of the AKT pathway through TAp63-regulated lncRNAs (TROLLs) and pave the way for more effective diagnostic tools for cancer progression and therapies against metastatic cancers with alterations in TP53 and hyperactivation of the PI3K/AKT pathway,” said Elsa Flores, Ph.D., chair of the Department of Molecular Oncology and leader of the Cancer Biology and Evolution Program at Moffitt.

This is just one of many breakthroughs that the researchers at Moffitt have brought to the table thus far in 2020. Back in July, the group discovered a key protein that oscillates its expression through mRNA regulation to spread cancer throughout the body. ΔNp63, as the protein is known, is a part of the p53 family, and many primary and metastatic tumors express high levels of it.

Flores and her colleagues developed mouse models to modulate ΔNp63 expression during breast cancer metastasis. They also discovered a network of four microRNAs that can target and silence the expression of ΔNp63.

“This finding is important because it gives us better insight into the regulation of ΔNp63 and TGFβ, key players in the metastatic process,” Flores said. “P53 is commonly mutated in human cancers, and we have found that ∆Np63 and p53 interact extensively in cancer.  We can use this information to design personalized therapies for cancer patients with alterations in the p53/p63 pathways.”

The Flores lab continues to work on developing microRNA-based therapies to keep certain proteins expressed at the appropriate level. In general, doing so in the future may be able to help block the metastatic spread of cancer throughout the body.

The Moffitt Cancer Center is based in Tampa, Fla. It is one of only 51 National Cancer Institute-designated Comprehensive Cancer Centers in the country.