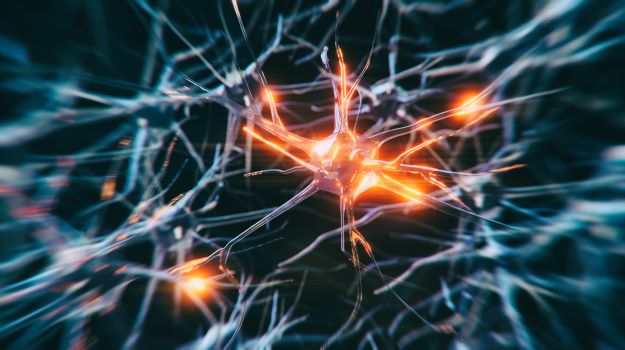 For years, researchers interested in treating amyotrophic lateral sclerosis (ALS) and frontotemporal dementia (FTD) have struggled to understand why variants of the gene encoding protein UNC13A, critical for synapse function in the brain, increased the risk and severity of these diseases. Now, with the help of CRISPR technology, researchers have unlocked a key mechanism behind the genetic variant which could prove hopeful for new treatments.

UNC13A is an important protein component for the brain, enabling neurons to communicate with each other via neurotransmitter release. The loss of this protein can have devastating and fatal consequences in animal models, leading researchers to believe that the loss of the protein in humans can have equally debilitating consequences. Previous research has shown that two common intronic polymorphisms of UNC13A overlap with TDP-43 binding sites.

TDP-43 is another key player in ALS and FTD; the protein is incorrectly ejected from the cell’s nucleus in patients, preventing it from performing essential functions such as ensuring that mRNA is produced correctly, which can produce chaotic effects in affected nerve cells. In 97% of ALS cases and half of FTD cases, TDP-43 depletion is present.

A research team formed through collaboration by University College London and the National Institutes of Health (NIH) has uncovered the association between UNC13A and TDP-43 for the first time, providing an important mechanistic driver of brain disease in these patient populations. The results, published in the scientific journal Nature, showed that depletion of TDP-43 drives the corruption of the genetic instructions for UNC13A.

When TDP-43 is depleted from lab-grown cells, the mRNA important for the UNC13A protein is corrupted, making neurons unable to produce the protein important for neuron communication. Loss of the essential protein can lead to exacerbations of these diseases, as they prohibit synaptic transmission at neuromuscular junctions, resulting in debilitating motor impairments in patients.

"We have known for a long time that genetic variants in UNC13A cause an increased risk of ALS and dementia, but nobody had figured out why this is the case. Together, our teams showed exactly how this genetic risk factor for ALS interplays with the core disease mechanism, TDP-43 loss, in order to worsen the disease course,” said co-corresponding author Dr. Michael Ward.

When viewing brain samples from patients, researchers found that mRNAs for UNC13A were incorrect, confirming that their lab experiments replicated the disease process in real-world patients. The results are long-awaited after over a decade of research has been spent attempting to uncover why common genetic variants produce devastating pathogenesis in these diseases. Part of the reason behind the long wait is that the genetic variants are located in a region of “junk” DNA, or sections of DNA that are not responsible for the encoding of proteins.

The findings are important not only for potential therapeutics in the treatment of ALS and FTD, but for Alzheimer’s disease, Parkinson’s disease and chronic traumatic encephalopathy as well, where TDP-43 depletion is a hallmark in a substantial number of cases.

Corresponding author Professor Pietro Fratta of the University College London Queen Square Institute of Neurology stated that the group is hoping to carry out trials to develop a treatment utilizing these results to improve the lives of people living with ALS. New therapies would target the process by which mRNAs of UNC13A become corrupted.

These results could become important for QurAlis Corporation. The company announced in 2021 that it was pursuing drug candidate QRL-201 for the treatment of ALS. The therapeutic is designed to rescue STMN2 gene expression in ALS patients, which would help to upregulate the expression of protein stathmin-2, important for neural repair and axonal stability.

Stathmin-2 is significantly regulated by TDP-43, and the presence of TDP-43 in the nucleus is essential for the expression of stathmin-2. Understanding the ways in which TDP-43 contributes to disease pathogenesis will become increasingly important as new therapeutics enter the arena.