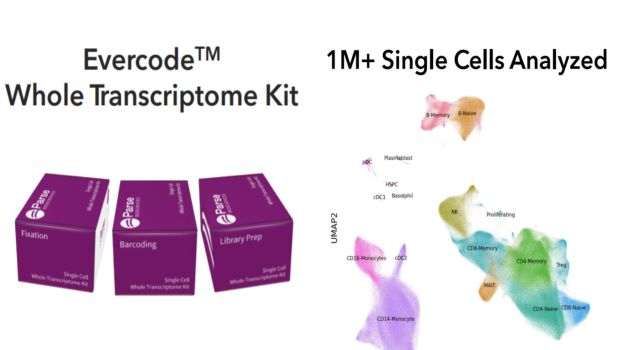 Single-cell sequencing is helping scientists understand cell type-specific gene expression, the workings of the regulatory network and a host of other biological challenges, but it has been limited by the number of samples that can be analyzed at once and the number of cells per sample that researchers can look at, as well as the need for expensive instrumentation.

Parse Biosciences aims to solve that challenge with a multiplexed approach that enables 96 samples and a total of 1 million single cells to be analyzed in parallel without the need for specialized lab instruments. The 10-fold increase from the 100,000-cell kit it announced last February “is inherent to the technology and the way we do single-cell sequencing,” Alex Rosenberg, Ph.D., CEO and co-founder of Parse Biosciences, told BioSpace.

Rather than linear calling, which labels each cell with a separate identifier, “We use split-pool combinatorial barcoding, which allows exponential scaling. We label each with a combination of bar codes. Consequently, the number of possible bar codes is multiplicative,” Rosenberg said.

For the Evercode Mega (the 1 million cell kit), he explained, there are four rounds of cDNA bar-coding followed by a fourth consisting solely of 16 PCR reactions. “That yields about 14 million possible combinations – 96x96x96x16 – which results in a very low probability that any single cell will receive the same combination of barcodes,” he explained. In practice, there is a 3.2% doublet rate per million cells, which Rosenberg said is lower than traditional single-cell sequencing technology.

The kits broaden the reach of single-cell sequencing to users such as key opinion leaders as well as grad students and post-docs who may not have ever worked with it before. “We want to make it accessible so people can get started easily,” Rosenberg said. The Evercode Mini kit, a smaller-scale kit that allows researchers to sequence up to 10,000 cells, accomplishes that, with a lower cost.

One of the key features of Parse Biosciences’ approach to single-cell sequencing is the ability to fix and freeze samples and run them later. Consequently, samples that are collected on different days can be stored for up to six months and run together in a single experiment. “At the end of the workflow, they have something they can sequence on an Illumina or other gene sequencer. Parse also provides analytics software,” he added.

Traditional single-cell sequencing methods don’t allow for sequencing at a later date, Rosenberg pointed out. “Single-cell droplet solutions aren’t robust with fixed samples, so researchers get a biological sample, dissociate it into single cells, and have to start their tests immediately. Sometimes that means starting a long workflow in the middle of the night, so the flexibility our solutions give to take samples, freeze them and sequence them later is hugely valuable.”

Sensitivity – defined as the number of genes or transcripts you can detect per cell – is high. “Sensitivity ultimately depends on the sample type and the quantity of RNA in the cell type, but we typically can detect 10,000 genes per cell,” Rosenberg said. That’s ample to discriminate between the various call types.

Rosenberg and co-founder Charlie Roco, Ph.D., CTO, formed Parse Biosciences soon after completing their post-doctoral work in 2018, largely in response to demands from scientists.  “We developed the original technology while at the University of Washington. Once we started giving talks and our paper (describing the technology) was published in Science that year, a huge number of people began talking to us about how to do this in their own labs.

“So,” Rosenberg continued, “we formed the company in response to all the people reaching out to us, needing to have better single-cell sequencing solutions. We’re focused on helping researchers accelerate their processes.” Currently, the young company has about 150 active customers across a wide breadth of applications, such as developmental biology, the development of cell atlases, drug discovery and screening on cell cultures and organoids, immunology, oncology and other research endeavors.

For the future, additional scalability and extended applications are on Rosenberg’s radar. “We’re excited about developing kits that are more applicable to specific fields of biology, and ways to make additional types of measurements of cells.” He is keeping the details within the company, but did point to a growing trend toward multiomics – “measuring multiple molecules in the cells.”