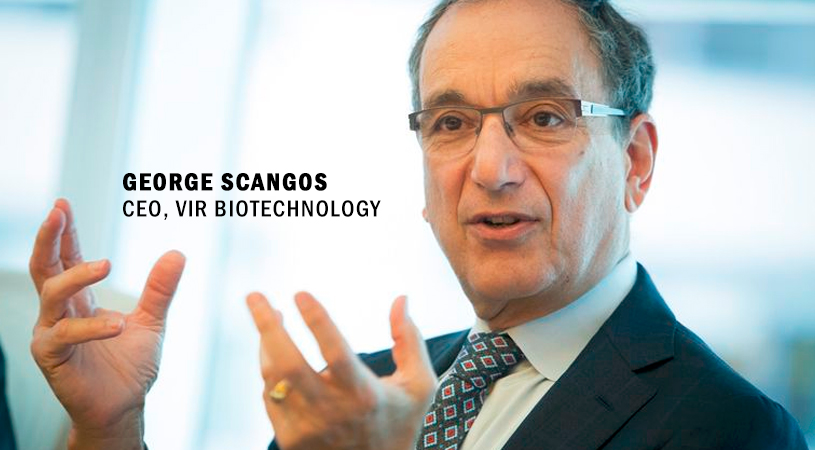 SAN FRANCISCO – Biogen ’s George Scangos did not stay retired too long. Scangos, who stepped down from Biogen’s chief executive officer position at the end of 2016, resurfaced this morning at the helm of startup Vir Biotechnology, Inc.

The new company will “apply immune programming at an unprecedented scale” to develop treatments and preventions for “challenging infectious diseases.” In its coming-out announcement this morning, the company said it will use breakthroughs in immune programming to manipulate pathogen-host interactions. Vir is adopting a broad technological portfolio, including the viral vectors obtained through the acquisition of TomegaVax, Inc.

"The opportunity to lead Vir is one I could not pass up. There is a tremendous global need for effective therapies and preventions for infectious diseases of considerable public health importance. Success would mean alleviation of a lot of human suffering as well as meaningful financial returns for Vir investors. The science has matured to a point where exciting new approaches are at hand, and there is a need for a company to pursue those approaches with excellence, critical mass and scale. Vir is that company, and I am very excited to take on a leadership role," Scangos said in a statement.

Scangos announced his retirement from Biogen in July 2016. Prior to joining Biogen, he was the chief executive officer of Exelixis . Scangos left the company on a high note, which included strong financial reports, as well as a promising pipeline, including a possible treatment for Alzheimer’s disease.

Vir is backed by ARCH Venture Partners and the Bill & Melinda Gates Foundation. ARCH helped launch the startup with an investment of $150 million.

"The scale and scope we envision for Vir will allow us to fund targeted academic research, ramp our own research and development effort, and write individual checks of up to $100 million to in-license innovative technology platforms and novel clinical assets from biotech and pharmaceutical companies," said ARCH Managing Director and Vir founder Robert Nelsen.

The Gates Foundation invests heavily into infectious disease research, including HIV and tuberculosis. Tuberculosis is one of the leading causes of death globally -- two billion have latent infection and 10 million new cases occur annually, the company said. While Vir did not specify which diseases it would initially take aim at, the company’s announcement pointed to the high numbers of tuberculosis, as well as chronic hepatitis B and seasonal influenza. Vir also cited figures put out by the U.S. Centers for Disease Control and Prevention regarding antibiotic resistant bacteria.

Vir launches with several industry veterans in leadership roles. In addition to Scangos, Vicki Sato, the former president of Vertex Pharmaceuticals and a former vice president at Biogen, will serve as chairman of Vir’s board of directors. Other board members include Nelsen; Kristina Burow who is also with ARCH Ventures; Klaus Frueh; Bob More; Phillip A. Sharp; Tom Daniel and Rob Perez. Vir’s scientific advisers include scientists Larry Corey; Jeff Bluestone; Emilio Emini; and Louis Picker, according to the company’s statement.