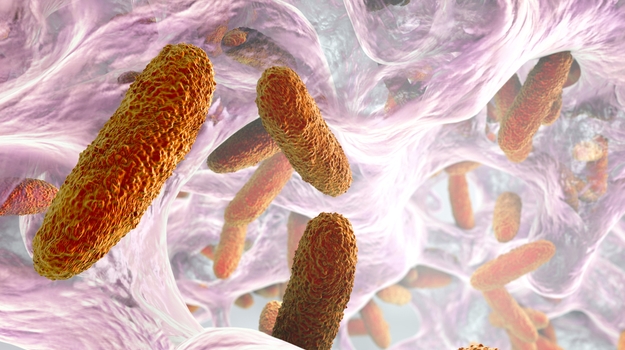 Klebsiella pneumoniae are bacteria that typically live in people’s intestines and feces and are generally harmless in the intestines. If they spread to other parts of the body, they can cause severe infections. They don’t typically affect healthy people, but people who have compromised immune systems are susceptible. Although treatable with antibiotics, they are developing drug resistance, which can be extremely difficult to treat with normal antibiotics.

A particularly virulent strain of the bacteria has emerged, hvKp, which causes severe, often fatal disease in healthy people. And there are increasing reports of multidrug-resistant hvKp. Studies have shown that the hvKp is so virulent that as little as 50 bacteria are lethal to mice, where classical strains require doses of 10 million bacteria.

Researchers at Washington University School of Medicine in St. Louis and biotech startup VaxNewMo have developed an experimental vaccine against K. pneumoniae that is effective in mice. The results were published in the journal Proceedings of the National Academy of Sciences.

“For a long time, Klebsiella was primarily an issue in the hospital setting, so even though drug resistance was a real problem in treating these infections, the impact on the public was limited,” stated co-author David A. Rosen, assistant professor of pediatrics and of molecular microbiology at Washington University. “But now we’re seeing Klebsiella strains that are virulent enough to cause death or severe disease in healthy people in the community. And in the past five years, the really resistant bugs and the really virulent bugs have begun to merge so we’re beginning to see drug-resistant, hypervirulent strains. And that’s very scary.”

Hypervirulent Klebsiella strains have been diagnosed in the tens of thousands in China, Taiwan and South Korea last year alone, and it is spreading around the world. About half of the people infected with hypervirulent, drug-resistant strains die. Two strains in particular, K1 and K2, cause about 70% of cases.

The research team genetically engineered a harmless strain of Escherichia coli (E. coli), causing it to manufacture a glycoprotein found on the surface of Klebsiella. These were linked to another protein to make the vaccine more effective, called a glycoconjugate vaccine. Another bacterial enzyme was used to link the proteins and sugars.

They are currently working on scaling up production and optimizing the approach so the vaccine can be used in human clinical trials.

“As a pediatrician, I want to see people get immunity to this bug as early as possible,” Rosen stated. “It’s still rare in the United States but given the high likelihood of dying or having severe debilitating disease, I think you could argue for vaccinating everybody. And soon we may not have a choice. The number of cases is increasing, and we’re going to get to the point that we’ll need to vaccinate everybody.”