Day in the Life of a CEO—Stephen Hurst, Savant HWP

Stephen L. Hurst is the president and chief executive of Savant HWP, a Bay Area biopharma company focused on addiction medicine and neglected diseases like Leishmaniasis and Chagas disease that are emerging in the U.S. population and endemic in other parts of the world. He has more than 25 years of experience in the biopharmaceutical industry and has contributed to the success of numerous complex and challenging healthcare projects. As the chief business officer for The Immune Tolerance Institute (2007-2011), he helped establish a human immune monitoring institute for The Regents of the University of California that discovers and develops immune biomarkers. As a consultant to The World Bank and BIO Ventures for Global Health (2005-2009), he helped establish an innovative funding mechanism for pneumococcal vaccines for the developing world (PneumoAMC), including capacity for two billion vaccine doses and funding of more than $4 billion over the next decade. 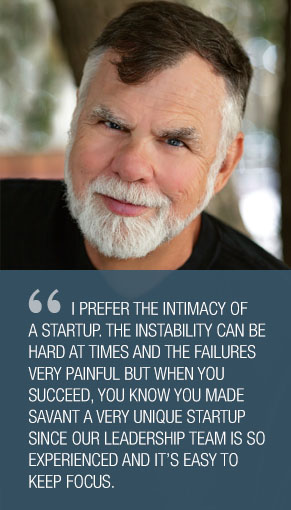 As founder, president and CEO of Sequential, Inc. (2002-2004), his team acquired and developed a clinical-stage oncology drug for the treatment of multi-drug resistance. While at Inhale Therapeutic Systems, Inc. (now Nektar Therapeutics, 1994-2002), he held several senior executive positions, including executive vice president, general counsel and secretary, interim senior vice president of operations, vice president of Intellectual Property and Licensing and head of business development and helped the company grow to over 700 employees, raise more than $700 million in investment capital and out-license multiple clinical development projects, generating revenues in excess of $100 million annually. Hurst is a graduate of Golden Gate University School of Law and the University of California, Berkeley (CAL) .

BioSpace chatted with Hurst about his background, his current passions and why he’s stayed in the field as long as he has.

1. When did you know this industry was for you?

The first time I closed a deal, I was hooked.

2. What were the results of the Phase I testing of 18-MC initiated back in October 2014 and how many healthy volunteers participated?

Between 10 and 20, details are still confidential, sorry.

3. What is the latest market potential for addiction treatment?

18-MC is neither a substitution or aversion therapy as are all the approved medications. 18-MC treats the dysregulation of dopamine in the mid-brain that is characteristic of all addictions. This is unlike any approved medication. What are some on the market? Methadone, Suboxone, naltrexone, nicotine patches and gum, Chantix and acamprosate.

5. What other drugs are in clinical trials for addiction treatment?

Many drugs approved for the treatment of various “mental disorders” are also being tested for addiction and in various combinations. There is nothing similar to 18-MC in clinical trials, however.

Our addiction medicine project will be back in the clinic later this year and we plan to file an IND on a new project, so stay tuned.

7. Walk us through your typical workday. 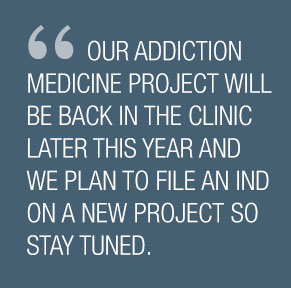 While there are typical parts of every day, there is no such thing as a “typical workday” at Savant HWP. Most days begin with email and a quick look at the news from overnight. Although we have few employees and are essentially virtual, Savant operates globally. Important emails come in overnight, and international as well as national events can impact my day. From there, my plan for any given day can either go smoothly or not at all.

Being able to work with extraordinary people on great projects. The rest follows from there. I’ve never accomplished anything without the help and support of smart and dedicated people willing to work hard and face the challenges head on. Of the projects I’ve worked on, I’d have to say that the Pneumococcal AMC (Advanced Market Commitment) with GAVI has had the greatest impact. That program is delivering advanced pneumococcal vaccines to tens of thousands of children in the developing world every year and is truly a lifesaver. 18-MC, Savant’s lead candidate drug for addiction, has a similar potential. If it is successful, not only could 18-MC help more than 20 million patients struggling in this country that need treatment for various types of addiction and aren’t getting it, but it could also impact a serious parasitic disease called leishmaniasis in the developing world.

9. If you had to choose between a startup or an established company, which would you pick?

I prefer the intimacy of a startup. The instability can be hard at times and the failures very painful but when you succeed, you know you made Savant a very unique startup since our leadership team is so experienced and it’s easy to keep focus. It’s the kind of team you would expect to be running a large established company but without the level of distraction that exists in that setting. It’s the best of both worlds, really.

10. Any pieces of advice for people looking to get to where you are now?

Focus on the people, not the technology. Great people can compensate for weak technology and changes in the marketplace, but the corollary is not true.

11. Why have you stayed doing what you do for so long? What makes it worth it?

The work is interesting and diverse, and the people are the best industry-wide. Why do anything else?

At the tail end of the interview, we asked Hurst about his life outside of work.

1. What’s your hometown and do you get back there often?

I am a fourth generation Bay Area native. I never left home.

We have a ranch in Mendocino County that keeps me occupied when I’m not working. We have dogs, cats, chickens, ducks and we’re considering a goat or two to keep the poison oak under control.

3. Anything in particular that makes you grateful?

My life has exceeded everything I had any right to expect. I can tell you that as the youngest child of a disabled mother living on social benefit programs, I never expected to be where I am now. I’m grateful for the opportunity I’ve been given and the support of my family. Again, it’s all about the people.