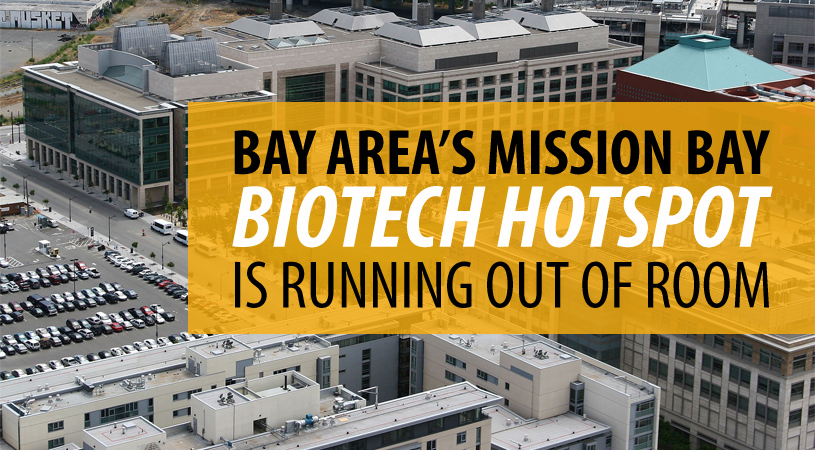 San Francisco’s Mission Bay is a hotspot for biotech startups, but it’s facing a major challenge—no room to grow.

The area started with about six biotech incubators and accelerators 15 years ago, and now is the home of 70. These companies, as well as the presence of companies like Celgene Corp. , Bayer HealthCare Pharmaceuticals , and FibroGen Inc., have made the Mission Bay the place to be, as well as its proximity to the University of California, San Francisco (UCSF). But as a recent San Francisco Business Times articles states, “Now that some of the young companies want to graduate to their own, larger space, they’re finding little to nothing in the San Francisco biotech enclave that helped them grow.”

Only two weeks ago, BioSpace reported on efforts San Francisco Bay Area developers are making to keep talented life science employees in the area. For example, HCP Inc. is pushing the second phase of its Cove at Oyster Point development in South San Francisco. It currently has 230,000 square feet of office buildings and two laboratories, but its next stage includes 20,000 square feet of retail space. The entire project could hit 884,000 square feet.

The retail area is designed to give workers in the area reasons to stay in the area. But today’s story might make people wonder if actual incubator and accelerator space might be of greater interest to biotech companies, rather than Ping-Pong and coffee bars.

“We really should be moving out into a larger space,” Brian Feth, co-founder and chief executive officer of Xcell Bioscience Inc., told the San Francisco Business Times. He claims the company needs 5,000 to 10,000 square feet. “There’s just not a lot of that space available.”

Xcell was launched in the QB3 East Bay Innovation Center, an incubator in Berkeley. It started in 2012, and was one of the first companies in Bayer’s Mission Bay CoLaborator when that space opened three years ago. Xcell was in Illumina Inc. ’s accelerator program in Mission Bay for six months, then expanded to eight desks at Rock Health, which is in the same building as Bayer. But now Xcell has 13 full-time employees, three interns and a beta version of its technology platform, and needs more space.

The problem Feth is finding is that much of the space available is too large or too expensive for the company’s needs. “We’re sitting tight right now,” Feth said. “We’ve hired everyone we want to hire and we’re in execution mode.” But Xcell is expecting another round of funding later this year, and will likely move after that happens.

Another example is Symic Biomedical Inc. This company was originally located at QB3, a University of California program that opened its Garage on UCSF’s Mission Bay campus, then set up another one at UC Berkeley and formed a partnership for QB3@953, which was a 24,000 square-foot off-campus incubator in the Dogpatch neighborhood near Mission Bay.

But Symic Biomedical eventually had 23 employees at the QB3@953 location and left for more space in Emeryville, Calif.

Another company, Alector Inc., raised more than $60 million to study Alzheimer’s disease and other neurodegenerative diseases, but is still at QB3@953. “They’re still there only because they couldn’t find suitable space,” said Douglas Crawford, associate director of QB3, to San Francisco Business Times. “It’s a disappointing challenge. It’s the downside of success.”

There is building going on. BioMed Realty Trust, which was recently acquired by Blackstone Group LP (BX), is building out a so-called “amenity space” in Foster City, Calif. for Illumina Inc (ILMN). Kilroy Realty Corp. is constructing the Exchange on 16th project, which will be 700,000 square feet. And there will potentially be some biotech space in two office towers being developed on Third Street called the Golden State Warriors’ arena development. But that won’t be ready until 2019, which is facing legal pressure from a group of former and current UCSF faculty, administrators, nurses and families of patients. The group, the Mission Bay Alliance, has filed a lawsuit to get the arena area reserved for biotech companies.

“You don’t have to (be in Mission Bay) to have success, but a lot of times opportunities will avail themselves if you bump into someone and solve a problem,” said Chris Haskell to the San Francisco Business Times. “It is hard to quantify, but it just increases your chance of success.”