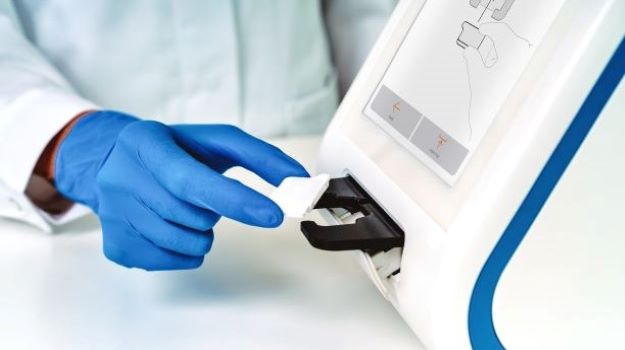 Since the beginning of the first wave, hospital personnel have struggled to make treatment decisions for patients sickened by the novel SARS-CoV2 virus – a virus that by this very definition, we still do not completely understand.

The cSOFA Score evolved from a test Abionic developed for sepsis. Both use the same abioSCOPE reader, a nanofluidic immunoassay technology that measures for novel biomarker, pancreatic stone protein (PSP). PSP has the potential to identify sepsis 24-72 hours from non-infection inflammation.

“We are measuring the state of the pancreas. The pancreas is the organ in the body that reacts fastest when you are suffering from complications such as infections or organ failure,” said Abionic CEO and Founder Nicolas Durand, Ph.D.

Sepsis is a life-threatening condition that occurs when the body’s response to an infection injures its tissues and organs. It is characterized by a drop in blood pressure, elevated heart rate and a fever.

Abionic quickly realized that this test could be repurposed to help in the fight against COVID-19.

“We had seen some complications from China, and from Italy, where physicians were observing that sepsis was one of the leading causes of death of COVID-19 patients,” Durand said.

He explained that this is due to bacteria in the hospital air that seeps into the lungs of the patient during intubation and ventilation, causing bacterial sepsis.

“The problem with the severe COVID-19 cases is that you have trouble sometimes to distinguish between the bacterial sepsis and the viral sepsis, also called the cytokine storm.  In this case, for physicians, if you have bacterial sepsis, you need antibiotics, but if you have just a viral one, you don’t need antibiotics, and you want to avoid giving antibiotics for the wrong needs. Otherwise, you can create resistance,” Durand said. “The physicians are struggling to understand this phase because the patient is in a coma. So you cannot really give the right antibiotics at the right time. Therefore, we thought maybe our test could be very interesting for that specific use.”

Durand said that the test “will be used for determining the complications. You can get a score…where you can distinguish if the person has no need of hospitalization if the score is at 0. That’s why we were also disclosing that this test will be very useful for triage of patients in the exclusion mode. In this case, we have a sensitivity of 100 % and a specificity of 95%, so you can be very precise about the decision of sending the patient back home.”

Importantly, the cSOFA score is obtained from just a drop of blood and takes only five minutes. This means that it can be used to monitor patients during their hospital stay for signs of deterioration before clear clinical signs appear, allowing physicians to make more informed decisions.

Besides being an innovative scientist, Durand is also an accomplished pilot who won the title of Swiss Champion in the category “Intermediate” at the Swiss National Aerobatic Championships. He made the following correlation:

“No physician will take decisions based only on one biomarker. But it’s like a pilot in a plane. You need several different instruments to make the decisions, and today we are bringing them an altimeter.”

Abionic has been working with several hospitals and physicians across Europe, conducting clinical trials of the test, since March.

One of these physicians is Dr. François Ventura, an intensivist at the Hirslanden Clinique des Grangettes, and part-time medical consultant in the anesthesia department at the Geneva University Hospitals (HUG).

Ventura, who has enjoyed a working relationship with Durand over the past couple of months, said that HUG began experimenting with the PSP test in March, during the first wave, to determine whether PSP levels could help to predict the likelihood of clinical deterioration and potential bacterial superinfection in severely ill COVID-19 patients admitted to the ICU.

“We decided to test PSP in patients in the hospital, but not in the intensive care unit, to see if there is a correlation with the PSP and the severity of the COVID-19 disease. We noticed very clearly that the PSP was correlating with organ dysfunction. The more organ dysfunction you have, the more the PSP was high,” he said. We’re still studying that, and we are still testing PSP in the patients in the emergency department. So, we are trying to do some statistical work to see if there is a perfect correlation,” Ventura said.

Ventura has begun testing the cSOFA score at Hirslanden Clinique des Grangettes. As this is a novel test used to help anticipate complications from a novel coronavirus, it is understandable that clinicians would not solely rely on it to make important patient care decisions. This is why Ventura feels it is ideal to combine the PSP numbers with the original SOFA score.

“As a medical doctor, we never accept to judge the way of patients by just one biological test,” he said. “That’s why we decided to combine both kinds of medical scores – clinical score, and the PSP level. Without the clinical part of the score, I would say that my confidence would be quite low. Because, as a physician, we are often very skeptical about just a biological marker, because we are not going to trust only a number. But with this clinical part, the confidence is much higher, because we observe the patient, and of course, if there is a big difference between the patient’s clinical state and the results, we can just forget the test. Because there is this clinical observation, I’m not afraid to use it.”

Ventura added that additional studies will be needed, with patient numbers on a scale similar to that of the vaccine trials, to determine the overall value of the cSOFA score.

In the middle of a crippling second wave, hospitals across the U.S. are again pushed to the brink. There are currently over 93 000 Americans hospitalized with COVID-19, and healthcare workers are in dire need of anything that could make their treatment decisions just a little bit easier.