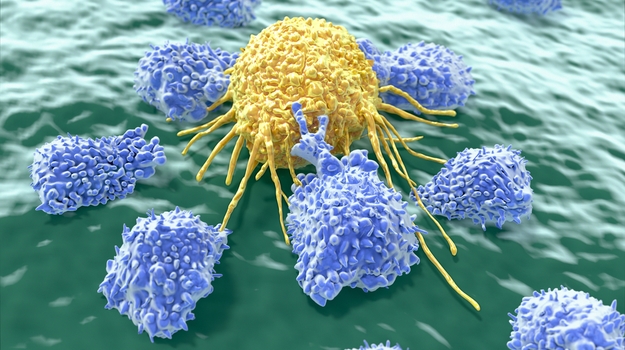 Washington University School of Medicine in St. Louis released a new study about the effectiveness of immunotherapy based on the age of the cells used. The study, published in the journal Developmental Cell, showed that these ‘natural killer’ cells seem to be more effective when they are ‘young.’ Natural killer (NK) cells, as they're called, are used in immunotherapy to treat cancer using the body's immune cells or immune cells from a matched donor.

"We are trying to improve the effectiveness of immunotherapy for more patients," said senior author Christopher M. Sturgeon, Ph.D., an assistant professor of medicine.

Typically, NK cells used in investigational immunotherapy are ‘adult’ and come from the patient or donor bone marrow. While these therapies can work, they don't work for everyone.

In contrast, ‘young’ NK cells do not use the patient's cell or donor cells. These early NK cells, typically formed in the yolk sac in the early embryo, are instead able to be created with human pluripotent stem cells. They can be manufactured quickly by most academic medical centers, thus eliminating the time it takes to process patient's or donor's cells for typical NK cell therapy.

"This special source of natural killer cells has the potential to fill some of the gaps remaining with adult NK cell therapy. There is early evidence that they are more consistent in their effectiveness, and we would not need to process cells from a donor or the patient. They could be manufactured from existing cell supplies following the strict federal guidelines for good manufacturing practices. The characteristics of these cells let us envision a supply of them ready to pull off the shelf whenever a patient needs them," Sturgeon said.

In studies with mice using the lab-developed human pluripotent stem cells to create early NK cells, researchers found positive results. These cells were significantly better at degranulation than adult NK cells. Even cells from umbilical cord blood did not respond as well as the early NK cells. Additionally, early NK cells are a particular type of short-lived immune cell, meaning that even if the cells cause harm, they aren't in the body for very long. However, NK cells, in general, do not attack the body's healthy tissues significantly, unlike many T cell therapies.

"Based on their unique behavior alone, there is one small clinical trial of these cells that is ongoing. Now that we know how to manufacture them and how they work, it opens the door for more trials and for improving upon their function, " Sturgeon said.

More research will need to be put into understanding why these special cells only show up in the early embryo and where they go after.

The origin and why they work so well is still a complete mystery.

"We can only speculate at this point, but it's possible that during early embryonic development, when there is so much rapid cell division, these cells are there as a surveillance mechanism to protect against pediatric cancers or infection," he said.

In addition to the early NK cells, pluripotent stem cells also have the potential to bring about many other different cell types, creating more possibilities.