A new technique developed by researchers from the California NanoSystems Institute at UCLA has allowed them to become the first scientists to clearly see the intricate machinery responsible for compressing DNA into the small interior shell, or capsid, of herpes simplex virus type 1, or HSV-1, the virus responsible for causing cold sores.

The advance could help contribute to the continued development of improved antiviral therapies — medicines used to treat not just cold sores, but also cancers and birth defects caused by other viruses in the herpesvirus family — that frequently target the viral DNA packaging process.

The team’s major accomplishment was its development and use of two techniques for image processing — symmetry relaxation and sequential localized classification — that enabled the researchers to produce highly refined 3D images of HSV-1 viral particles, or virions, seen by cryo-electron microscopy. These methods allowed the scientists to see the unique structures in HSV-1.

A paper on the work is published in the journal Nature. 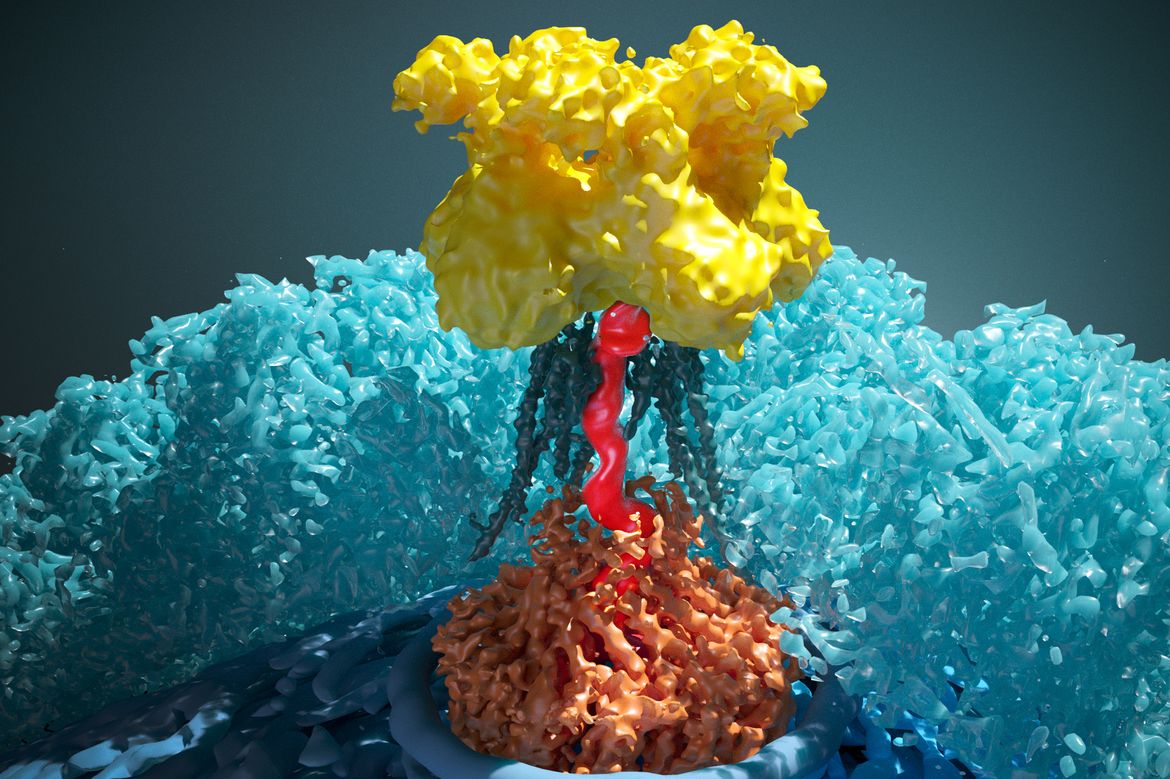 “Viruses tend to be highly symmetric,” said Yun-Tao Liu, a visiting graduate student at UCLA from the University of Science and Technology of China, and the study’s co-first author. “Traditional 3D reconstruction techniques leverage this symmetry to visualize the virus, but the downside is you can’t see structures that deviate from this symmetry. To our amazement, our specialized methods enabled us to see the unique structures of the HSV-1 virion and much of the viral DNA genome.”

The study’s other co-first author is Jonathan Jih, who graduated from UCLA in 2013 and recently founded a company that specializes in creating atomic models of structures seen by cryo-electron microscopy, or cryoEM.

“The DNA packaging process in herpesviruses is fascinating because it’s driven by a nanoscale motor that pumps the viral capsid full of DNA under incredible pressure, up to internal pressures of tens of atmospheres,” Jih said. A standard atmosphere is the amount of air pressure exerted by the Earth’s atmosphere at sea level, or about 14.7 pounds per square inch. (For comparison, the pressure 300 feet below the surface of the ocean — which is three times deeper than recreational scuba divers would go — is 10 atmospheres.)

The high pressure inside the virion is what makes it possible for the virus to eject its DNA into the cells of the body during viral infection.

The specialized methods used in this study produced the highest resolution 3D reconstruction to date of the top of the HSV-1 virus — called the portal vertex region — which is where viral DNA enters the capsid.

The researchers managed to map many parts of this area to the level of individual atoms, giving them a detailed look at molecular interactions that have long been areas of great interest to virologists.

For example, the researchers identified a portal cap structure that “corks” the viral genome in the high-pressurized capsid, along with structures called “tentacle helices,” which extend from the portal complex toward the site of the portal cap and genome-packaging motor.

“Despite being of critical importance, the details of this DNA packaging process were previously not well understood, largely due to the difficulty of visualizing the unique components of the virus at sufficient resolution,” said senior author Z. Hong Zhou, director of the Electron Imaging Center for NanoMachines at the California NanoSystems Institute at UCLA, and a professor of microbiology, immunology and molecular genetics. “This work represents the first detailed look at the structure of the portal vertex and the first atomic model of its constituent portal complex in the HSV-1 virus.”