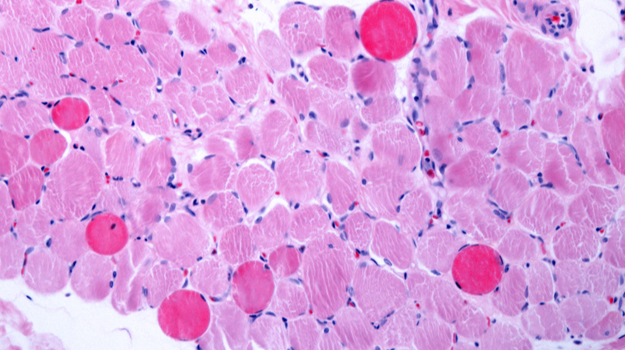 Great progress has been made in treating Duchenne muscular dystrophy (DMD) in recent years, much of it with gene therapies. Rockville, Maryland-based ReveraGen BioPharma is taking a different approach.

The company presented topline data from an 18-month treatment of DMD patients with vamorolone, a first-in-class steroidal anti-inflammatory. It is being developed as an alternate to corticosteroids such as prednisone or deflazacort. The company’s chief executive officer, Eric Hoffman, presented the data at the 24th International Annual Congress of the World Muscle Society (WMS) held in Copenhagen, Denmark.

The trial data demonstrated that 48 DMD patients receiving a broad range of doses of vamorolone for six months showed dose-related improvement in multiple gross motor outcomes. After finishing the six-month period, almost all patients and their doctors decided to continue treatment with the drug. Of the group, 45 boys participated in a two-year long-term extension trial with dose escalation to 2.0 or 6.0 mg/kg/day of vamorolone.

DMD is a is a muscle wasting disease that primarily affects boys. It is progressive and results in gradual loss of muscle and weakness, leading to loss of the ability to walk and eventual death. Currently the best-known treatment is Sarepta Therapeutics’ Exondys 51, indicated for DMD patients amendable to exon 51 skipping.

“Our findings suggest that vamorolone results in improvement in DMD patient function, similar to that of corticosteroids, but with less side effects, including no stunting of the growth of DMD children,” said Hoffman.

Paula Clemens, professor of Neurology at the University of Pittsburgh and Study Chair, said, “The poor growth of DMD boys after taking corticosteroids is of concern to patients and families, and the lack of this growth failure with vamorolone treatment is an objective outcome of improved safety.”

In the presentation, Hoffman reported motor function data from 23 patients receiving either 2.0 or 6.0 mg/kg/day of vamorolone for at least 18 months compared to steroid-naïve patient from the Duchenne Natural History Study (DNHS), which was run by the Cooperative International Neuromuscular Research Group (CINRG). Vamorolone showed significant improvement in the speed of a 10-meter run/walk and a 4-stair climb relative to historical controls. In addition, time to stand from supine also demonstrated significant improvements in the vamorolone group from baseline to 18 months. However, a comparison in that group to CINRG DNHS steroid-naïve patients didn’t show significance.

The patients receiving vamorolone demonstrated normal growth rates as well as less physician-reported weight gain and Cushingoid features compared to previously published study of prednisone and deflazacort. Aside from efficacy issues, one of the big pluses is that vamorolone appears to have fewer adverse effects than the corticosteroids, which often results in poor compliance.

Vamorolone binds to the same receptors as corticosteroids. However, it modifies the downstream activity of the receptors. The company believes this will allow the drug to be adopted instead of corticosteroids, which are current standard of care in children and adolescents with DMD.

ReveraGen BioPharma is developing the drug with financial and scientific assistance of several international non-profit foundations, the U.S. National Institutes of Health, the U.S. Department of Defense and the European Commission’s Horizon 2020 program. In November 2018, Switzerland-based Santhera Pharmaceuticals acquired the option to an exclusive sub-license to vamorolone in all indications and all countries globally except Japan and South Korea from Indorsia Pharmaceuticals.